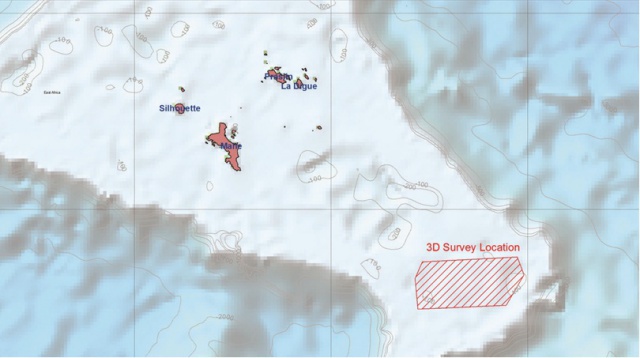 (Seychelles News Agency) - The search for hydrocarbons beneath the ocean floor in the Seychelles has received another boost as Australian oil exploration company WHL Energy released a review of its preliminary 3D seismic survey data, revealing “large scale” high-grade prospects totalling a best estimate of over 500 million barrels of oil (MMbbls).

According to a press statement issued by WHL on Thursday, the 3D seismic survey, which was conducted mid-2014 by WHL’s farm-in partner Ophir in the ‘Junon’ exploration block 115 kilometres south-east of the Seychelles’ main island of Mahé, has confirmed the initial ‘fast-track’ data reports released in October last year.

The Indian Ocean archipelago of 115 islands has a vast oceanic territory, or Exclusive Economic Zone, of almost 1.4 million square metres. Interest in the area for hydrocarbon exploration has been elevated for the past year since the Japanese Oil Gas Minerals Exploration Company (JOGMEC) conducted a two week geochemical survey in the waters south-west of Mahé.

If you were wondering just how much 500 MMbbls is on the grand scale of things, this might help you get a global perspective: the IEA Oil Market Report forecast average demand for 2015 of more than 93 million barrels of oil and liquid fuels per day worldwide, with January 2015 production totalling just over 94 million barrels per day.

Using this comparison, 500 MMbbls would power the entire world for around five days, and at the current price of $51.20 per barrel (which is equivalent to around 159 litres) that’s worth somewhere around $25.6 billion.

Ophir Energy, which is involved in oil and gas exploration in East and West Africa with interests in countries including Ghana, Gabon, Somaliland and Kenya, signed a farm-in deal with Australian oil company WHL in March last year.

Under the agreement, Ophir stands to earn a 75 percent stake in WHL's offshore Seychelles assets in return for an investment of up to $17.0 million on exploration, including the conducting of some 1,500 square kilometres of 3D seismic surveying.

According to the WHL’s preliminary interpretation, the Junon Central and Junon South East prospects in particular have hinted substantial opportunities of over 200 MMbbls each.

Commenting on the results, WHL Energy Managing Director, David Rowbottam said in the statement that it was “pleasing” to report the “continued strong progress” with the 3D survey results.

“It is also encouraging that prospects and leads which were initially identified on the regional 2D seismic grid have developed into potentially substantial prospects with the 3D seismic acquisition,” he said.

The company says it is also confident that preliminary results from a 2D survey in other prospective exploration areas, such as the block named ‘Beau Vallon’ and ‘Junon North’, will yield more valuable prospects with further 3D seismic surveys in these areas.

“If our JV partner Ophir Energy plc elects to continue to the drilling phase under its farm-in agreement then these are the likely targets of future seismic acquisition,” said Rowbottam.

Still too early to tell

Despite the encouraging news, the state-owned company responsible for regulating the hydrocarbon sector of the Indian Ocean archipelago, PetroSeychelles, told SNA that the preliminary PreSTM (pre-stack time migration) results were still insufficient for a proper analysis of the prospects.

“We have looked at it, we have viewed it, but we haven’t done any in-depth analysis... we felt that we needed better processed data, and they are currently processing it now,” the Chief Executive Officer of PetroSeychelles Eddie Belle told SNA yesterday in a telephone interview, adding that these results were expected to be available around May 2015.

The processed data will allow PetroSeychelles’ in-house geophysicist to conduct a depth migration analysis, which he said would probably take another month to complete.

“It will help to better identify the prospect or map out the prospect,” Belle explained. “And once you have mapped out the prospect, you still don’t know what’s in there. You still need to drill to find out whether there is oil and gas or water in there.”

“So we have looked at it, we’ve viewed it, but we are waiting for the next batch of data which is being processed for depth migration before we do the full analysis on our side.”

When asked when the first drilling exploration was expected, Belle responded that it was still too early for PetroSeychelles to pronounce on this, saying that he would rather not “raise expectations”.