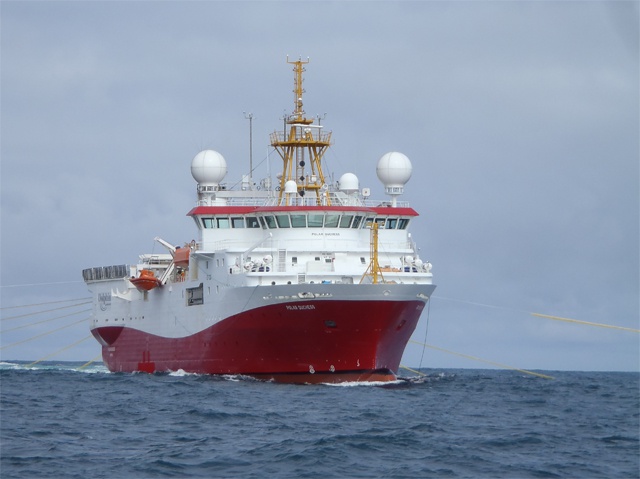 (Seychelles News Agency) - A 3D seismic survey of a designated 1500 km² of the Seychelles Exclusive Economic Zone got underway during the weekend as part of the recent joint venture for oil exploration activities in the Seychelles waters between FTSE- listed Ophir Energy and Australian oil and gas exploration company, WHL Energy.

In April, the Indian Ocean islands’ government gave its approval for Ophir Energy to acquire 75 per cent interest in WHL's offshore Seychelles assets by spending $17 million on exploration.

Ophir has subcontracted a Norwegian seismic company Dolphin Geophysical which has sent one of its seismic vessel the “Polar Duchess” for the job.

‘Polar Duchess’ built just two years ago departed the Seychelles port of Victoria on Saturday evening heading to an area known as the Junon Block some 125 kilometres southeast of the main Seychelles island of Mahé.

This is the second 3D seismic survey in the Seychelles Exclusive Economic Zone, but the previous one focused in the North West of Mahé.

“The vessel will be travelling at a speed of around 8-9 km/hr while towing ten 6 km long cables,” Bruno Webster, the Shore Representative for Dolphin Geophysical told SNA before they left Port Victoria on Saturday.

During the next 6 –7 weeks Polar Duchess will be acquiring magnetic data which will later be analysed to give the interested parties a clear idea whether there is a potential to start drilling for oil around the surveyed areas.

For the current seismic Polar Duchess is accompanied by three support vessels and has armed security personnel on board for security purposes.

“I have been here for two weeks to work with authorities to talk about the location, when we are starting the survey, the duration, number of ships involved in the operation etc….we have discussed with the Seychelles Maritime safety Administration, Coast Guards, Seychelles Fishing Authority …we will be issuing navigation warnings on a daily basis to reduce any risks to mariners or fishermen,” Webster told SNA

He noted that the current south east monsoon is a good time for them because there is not that much fishing activities where they will be surveying as the sea is rough.

There are some 60 people onboard the ‘Polar Duchess’ comprising of the maritime crew, the seismic crew and other personnel like the security officers and trainees.

Searches for oil by other companies

“A lot of data is acquired during such surveys, for the one in April data is still being processed it will take another 3 to 4 months …the current one after the survey is completed it will take some 6 to 7 months to analyze the data to determine exactly where there is potential to start drilling…its only through drilling that you will find oil,” Eddie Belle the Chief Executive of PetroSeychelles.

Oil exploration in the Seychelles waters has been attracting more interest recently, JOGMEC in partnership with PetroSeychelles also ordered a two week geochemical survey at the end of last month aside of the 2D seismic in April.

“There is another company Afren that wants to collect Data within the Seychelles Exclusive Economic Zone…..I am not sure but it’s possible that they may decide to come before the end of this year,” said Belle.