Defense, visas and the blue economy – no stone left unturned as Modi wraps up visit to Seychelles 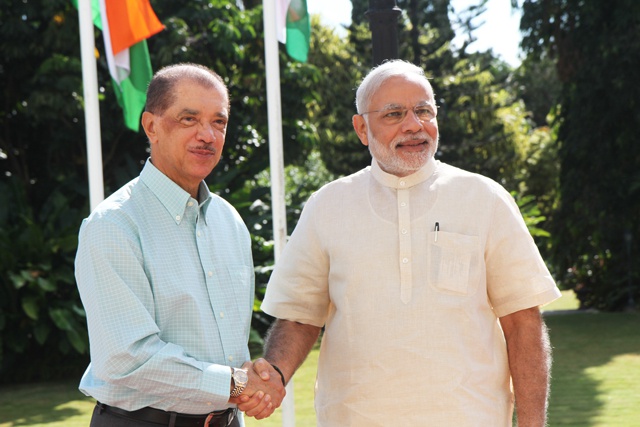 (Seychelles News Agency) - The first leg of Indian Prime Minister Narendra Modi’s tour of three Indian Ocean islands has come to a successful end after his whirlwind visit to the Seychelles ended in the conclusion of four bilateral agreements as well as the ceremonial switching on of a surveillance radar system.

Addressing the media after his visit to State House in the Seychelles capital of Victoria, located on the main island of Mahé, Modi announced that a joint working group would be established between the two countries to expand their cooperation on the blue economy.

“This cooperation will increase our understanding of marine ecology and resources. We will improve our ability to harness new possibilities of the ocean in a sustainable and balanced manner,” said the Prime Minister, who hailed the agreement as a “major step” in advancing scientific and economic cooperation between India and Seychelles.

Commenting on the announcement, the Seychelles President, James Michel, said the willingness of the government and people of India to work with Seychelles in the development of the blue economy concept was very encouraging.

"This is an area that holds great promise for our nations," he said. "The blue economy is all about ownership by regional states of the resources in our oceans around our islands and our coasts."

“We are very encouraged by the willingness of the government and people of India to work with us in the context of the development of our blue economy,” added Modi. “This is an area that holds great promise for our nations. The blue economy is all about ownership by regional states of the resources in our oceans around our islands and our coasts.”

After his arrival in the Indian Ocean archipelago of 90,000 people on Tuesday evening, the Indian Prime Minister began his Wednesday morning with a private visit to the Hindu temple in the Seychelles capital of Victoria.

His arrival at State House, the first official visit of an Indian Prime Minister since Indira Gandhi came to the islands in 1981, was greeted by a guard of honour ceremony, and the leader of one of the world’s most populous nations was led into a brief private discussion with the Indian Ocean island nation’s President Michel.

India’s bilateral cooperation with the Seychelles has been ongoing since the Indian Ocean island nation gained independence in 1976, mainly in the field of health, education, defence and maritime security, the most recent being a patrol ship which the Indian government gave to the Seychelles Coast Guard to better patrol its extensive Exclusive Economic Zone (EEZ).

The bilateral meeting held shortly thereafter were attended by the Prime Minister and his delegation, which included Indian Foreign Secretary Subrahmanyam Jaishankar and National Security Adviser Ajit Doval and memorandums of understanding were signed in the fields of renewable energy, hydrography, and the development of facilities on Assumption Island, as well as a protocol agreement on the sale of navigational charts.

The Indian Prime Minister told the media that his government had decided to grant free three-month visas on arrival to the citizens of Seychelles, eliminating the need to go through a visa application process prior to visiting India.

In his address, President Michel announced that the Indian Prime Minister had extended an invitation for a reciprocal visit to India, which Michel accepted.

“I thank you very much for your kind invitation, which I accept with great pleasure. It is always a good experience to visit incredible India... a beautiful country where its unity is woven in a tapestry of diversity. I look forward to meeting you in Delhi in the course of the year,” he said.

Michel previously visited New Delhi in 2010, and he also cancelled an official visit to India in January 2013 after heavy rains from Tropical Storm Felleng caused widespread flooding and damage in the small island state, which remains geographically vulnerable to changing weather patterns resulting from climate change.

Modi also announced the upcoming donation of a second Dornier surveillance aircraft to the Seychelles Coast Guard to increase maritime security. India gifted Seychelles with its first Dornier early in 2013.

“Our security partnership is strong. It has enabled us to fulfill our shared responsibility to advance maritime security in the region,” said Modi in his address. “It is a privilege to be a partner of Seychelles in the development of its security capabilities.”

Later that morning, Modi also launched the Coastal Surveillance Radar station located high up at Ma Josephine in a mountainous central region of Mahé, describing it as another symbol of the cooperation between the two countries.

The Coastal Surveillance Radar project has been linked in the Indian media to an extensive regional surveillance system being installed in several Indian Ocean island states, and the Prime Minister mentioned in his speech that he hoped Seychelles would soon become a “full partner” in the maritime security cooperation between India, Maldives and Sri Lanka.

Time for the common man

Despite his busy schedule, Modi made sure that he spent some time reaching out to the Indian community in Seychelles, as he attended an event organised in his honour at the Palais des Sports on the outskirts of Victoria.

According to recent figures provided by the Ministry of Home Affairs, there are approximately 8,200 Indian nationals living and working in the Seychelles, primarily in the field of construction. Seychellois of Indian origin also made their presence felt at the event, which included entertainment by Tamil and Gujarati dance troupes.

Addressing the crowd in Hindi, those assembled eagerly shouted, clapped and waved Indian flags, making their approval of the populist leader from the Bharatiya Janata Party (BJP) who swept to power in elections mid-last year clear.

Modi is now on his way to Seychelles’ neighbouring island state of Mauritius, where he is expected to be greeted by Mauritian President Rajkeswur Purryag and Prime Minister Anerood Jugnauth after arriving in the capital of Port Louis later on Wednesday.

The Indian Prime Minister will be the guest of honour at the Mauritian Independence Day celebrations on Thursday.