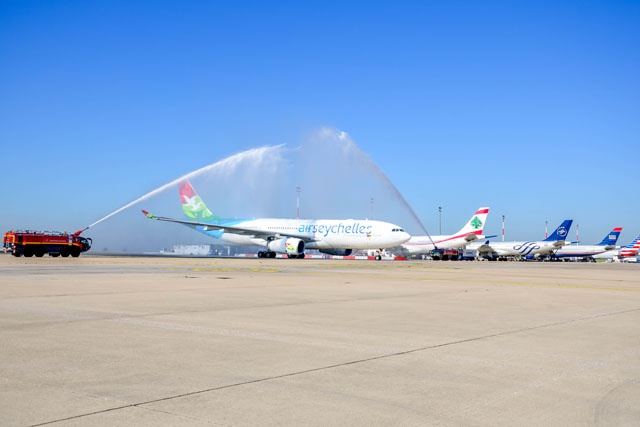 (Seychelles News Agency) - The Seychelles national carrier, Air Seychelles, is expected to start non-stop flights to France as of July 2015, offering a thrice-weekly service between the archipelago’s main island of Mahé and the Charles de Gaulle airport in Paris.

Announcing the new development in a press statement issued this morning, the Seychelles Minister for Foreign Affairs and Transport, Joel Morgan, said Air Seychelles will be flying non-stop to Paris with the “close collaboration of Air France.”

“This is an important step for Seychelles and is made possible by the strengthened co-operation with France, following the important meeting between President James Michel and President Francois Hollande in Paris last year, as well as his meeting with senior officials from Air France and the ongoing commitment and support of the shareholders,” said Morgan.

“Making the opportunity to have sustainable non-stop flights to Paris CDG even greater is the fact Seychelles is registering double-digit growth in tourism arrivals from France, our number one market, since the beginning of this year.”

Following a drop last year where it was replaced by Germany as the Seychelles main tourism market, France is back in the leading seat in tourism arrivals at the beginning of 2015.

According to latest figures available from the National Bureau of Statistics website, 7,521 French visitors have travelled to Seychelles up to March 8, which is a nine percent increase when compared to the same period last year.

Air Seychelles re-launched flights to Paris via Abu Dhabi at the beginning of July last year after a two and a half year absence operating twice weekly flights between Seychelles and Paris.

The lack of non-stop flights was one of the main complaints of people travelling between the two destinations. Some of the top French tour operators marketing Seychelles as a tourist destination also highlighted this concern as one of their main challenges during a meeting with the Seychelles tourism authorities in France last year.

The decision was then taken for passengers travelling between Seychelles and Paris on the Seychelles national carrier, to remain onboard the aircraft while on transit in Abu Dhabi following approval for Air Seychelles to make "technical stops only in Abu Dhabi" on the way to the Indian Ocean archipelago.

Following today’s announcement that non-direct flights will now be possible as of July, Morgan has called for the support of all stakeholders, locally and overseas to ensure the success and viability of the operation.

"While Air Seychelles will provide the air connection, at the end of the day it is the trade, tourism marketing and promoters who need to make things happen in support of this initiative. This is the exciting challenge we all need to rise up to meet, let us work hard together as a team to make it a resounding success for Seychelles,” said Morgan.

The announcement that Air Seychelles will be resuming uninterrupted flights to Paris comes a few days after the national carrier reported a net profit of $3.2 million in 2014.

Air Seychelles, which was established in 1977 and adopted its present name in September 1978, was until 2012 wholly owned by the Seychelles government. UAE's Etihad Airways invested $45 million in Air Seychelles when it bought a 40 percent share in the airline in 2012 with the aim of turning the company around after several years of losses.