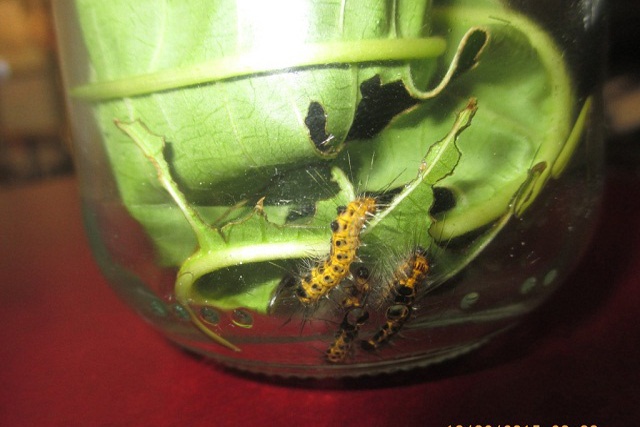 A couple of the yellowish-black caterpillar captured in a jar. (Seychelles News Agency)

(Seychelles News Agency) - The Seychelles authorities are intensifying efforts to fight an infestation of yellowish-black caterpillars with stinging hairs following the spread of the pest first reported in February.

The caterpillars have been observed in several regions and islands of the Indian Ocean archipelago including the northern part of Mahe Island, the most populated island of Seychelles, which is the most affected. Other islands such as Praslin, La Digue, Cerf and Moyenne have reported its arrival.

People have reported developing an itchy skin rash after coming in contact with its urticating hairs which may last several days and is treatable using antihistamines.

“We sent samples of the moths to several of our partners, including laboratories in La Reunion and also Australia. What they have confirmed is that this type of caterpillar is from the genus Euproctis. However, they could not identify the species,” said Randy Stravens, the Director of Plant and Animal Health Services in the Seychelles Ministry of Fisheries and Agriculture, in a phone interview to SNA.

“The closest species to what we have sent to them that they could identify were Euproctis Fraterna, [brown coloured moth] and Euproctis Pectinata,” said Stravens, adding that this could be a new species or could have been around but have never been identified and recorded by anyone.

According to the islands’ Division of Risk and Disaster Management (DRDM) there is a coordinated eradication effort underway in the Indian Ocean country of 90,000, where there have been over 200 requests for assistance to deal with the infestation of caterpillars. This includes 16 schools that have been fumigated.

In a press conference on Friday, the DRDM, the Seychelles Agricultural Agency and the Ministry of Fisheries and Agriculture announced that an action plan costing about $219,000 is being proposed for government funding.

This eradication effort involves wide scale spraying with the bio-pesticide Bacillus Thuringengirensis, which is a naturally occurring bacterium that can infect and kill insects. The use of chemical pesticides is being discouraged as this could destroy parasitoids or biological agents in the environment.

“While trying to eradicate the pest, we are also encouraging biological control," said Stravens, who was also present at the press conference, adding that they are not considering other parasitoid at this stage.

“Until now, it has been found that mixing Javel [bleach] and water on a 1:3 ratio is rather effective, though this can only be used to a limited extent and covering only small areas,” he added.

Stravens said that one common reaction to the moth infestation has been cutting or burning down infected branches, which “unfortunately, this only causes the infestation to spread as the moths just fly elsewhere.”

He adds that although the hairy caterpillar feeds on the leaves of a dozen plants commonly found in Seychelles, including the mango and golden apple, it is more commonly found on the ‘Bodanmyen’, also known as Tropical Almond tree and on castor bean plants locally known as ‘Tantan’, both of which grow abundantly in coastal areas.

The Chief Executive of the Seychelles Agricultural Agency, Marc Naiken says the moth is not affecting fruits and vegetables of Seychelles and that though in some instances, the pest has been found feeding on leaves of some fruit trees, such as the mango, however farmers have not expressed concern at this point in time.

He said the risk of such pests arriving in Seychelles in a dormant stage on ships is high.

Naiken said a new piece of bio-security legislation will be introduced soon which he hopes will have significant repercussions in controlling pests at points of entry, such as the port and airport.

Although it is not known how the caterpillar reached Seychelles, Euproctis Fraterna has been reported in the islands of the Maldives, situated to the north-east of the Seychelles archipelago.

According to Eco-Consult Pacific, a Fiji-based consulting group, the caterpillars and adult moths of Euproctis fraterna “regularly reach outbreak levels on the Maldives, when they can cause complete defoliation of native trees on some islands.”

The company sent a specialist on integrated pest management to the Maldives in 2004, where they faced outbreaks of large clusters of the caterpillars and assisted with the development of a control programme.

In 2006, another outbreak was reported in the Baa atoll of the Maldives.