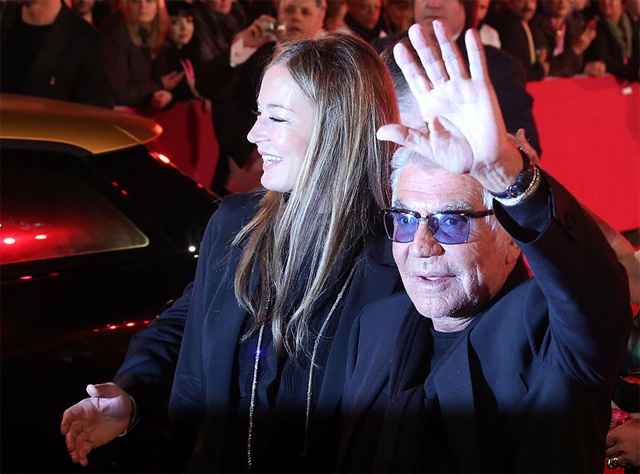 (Seychelles News Agency) - The Easter holiday in Seychelles, with its usual soaring temperature and light breezes was the perfect setting last weekend for popular Italian fashion designer, Roberto Cavalli, who left behind the extravagance and glamour of Rome to indulge in the tropical beauty of the Indian Ocean archipelago of 115 islands and 90,000 people.

‘Un forte abbraccio!’ in Italian, meaning ‘big hugs’ to fans and models around the world, Cavalli wrote on his blog, posting a poetic review of his holiday to the Indian Ocean islands.

“….Seemingly suspended between heaven and earth we appear to be floating, buoyed and bobbing on the ocean supported by fragile beaches, surrounded by nature with colours that look surreal as they are so intense, saturated, detailed…,” he states.

The comments were accompanied by two photos of a clear-sky and sandy beach and a birds-eye view of a pristine bay shadowed by a hill with dense forests.

It is unclear where the photos were taken but the globe trotter seems to have been in awe with the sceneries of Seychelles, stating that it is a “true paradise on earth”.

Cavalli was able to capture these fishes which he relates to as his ‘colourful’, ‘shapely’ and ‘curious’ models using his underwater camera.

Known for his exotic prints and for creating sand-blasted look which revolutionized the Denim world, as well as his fragrances ‘Just Cavalli,’ he seems to have been inspired during his holiday for new creations he is planning to make.

“How many inspirations for a new collection can be dedicated to these places,” he writes.

It is unclear if Cavalli, as is customary amongst the mainly Catholic population of Italy, spent the Easter holiday in Seychelles with his family, which includes his wife Eva Duringer, a former Miss Universe in 1977 and his five children, including his equally talented son, designer Daniele Cavalli.

Italy is amongst the leading tourist markets for Seychelles. In 2014, Italy was ranked as the third market for tourists with 19,876 Italians visiting the tropical islands, while Germany was in first position followed closely by France, in a year when 232,667 tourists from around the world came to visit.

According to the Seychelles Bureau of statistics 4,737 Italian visitors have come to Seychelles up to April 5th this year.

Cavalli writes on his blog that his holiday allowed him to make new friends.

“…Sometimes I catch myself thinking how often life brings us delightful and unexpected surprises.”

Aged 75, Cavalli has built a fashion empire with lavish designs and revolutionary ideas.

According to an article which appeared on the website of fashion magazine, ‘Vogue’ in May 2011, he opened his first boutique in Saint-Tropez in 1972 and since then has had a flourishing career which includes a series of high-street collection worn by various glamorous models.

The Seychelles islands are a popular holiday and honeymoon destination for the rich and famous. In 2011, Prince William, the Duke of Cambridge and Catherine, Duchess of Cambridge spent their honeymoon on North island.