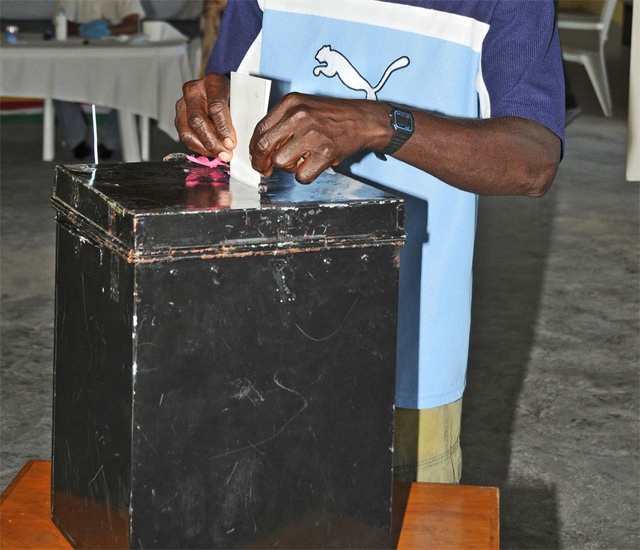 New political parties are being registered in Seychelles with the next presidential election around the corner. (Patrick Joubert, Seychelles News Agency)

(Seychelles News Agency) - With the next Seychelles presidential and parliamentary elections on the horizon, the political atmosphere in the Indian Ocean archipelago of 115 islands with a population of around 90,000 people, is starting to heat up with parties and individuals starting to make known their intentions to participate in the next democratic polls.

Recently the Independent Conservative Union of Seychelles (ICUS) was registered as a new party, bringing the total to six registered political parties in the small island state, of which the socialist party ‘Parti Lepep’ (People’s Party) is in power.

On Friday, a newly formed ‘Lalyans Seselwa’ [Seychellois Alliance], submitted its registration documents to the Electoral Commission, following rumours about the party’s formation circulating in the islands for weeks.

After the President of Seychelles, James Michel, leader of the Parti Lepep, confirmed in February this year that he intends to run for a third term in office, the three main opposition parties in the Indian Ocean archipelago, namely: the Seychelles National Party (SNP), the Seychelles United Party (SUP) and the People's Democratic Movement (PDM) also confirmed that they would be participating. The Seychelles Freedom Party has not made any public statement.

Philippe Boullé, a Seychellois lawyer, who stood as an independent candidate in past presidential elections has also presented his manifesto for 'Change and Renaissance' earlier this month, announcing in a local newspaper that he intends to stand again as independent candidate.

A press statement from ‘Lalyans Selselwa’ issued Friday afternoon said the application to register the party had been presented to the Chairman of the Electoral Commission, Hendrick Gappy.

“As [the] leader of our party, Lalyans Seselwa, Mr. Patrick Pillay and Secretary General Ahmed Afif have handed over all the required documents to Mr. Gappy and he has confirmed that everything is in order. The Electoral Commission will now consider the application and will subsequently inform us of its decision,” added the statement.

Pillay was a high-ranking figure within the Parti Lepep, who was the islands’ Minister for Foreign Affairs from 2005 to 2010 and was then posted as Seychelles High Commissioner to the UK until 2012, when he retired.

Ahmed Afif was also a high-ranking official with the Seychelles government, who served as CEO of the Seychelles International Business Authority and then later as Principal Secretary for Finance and Trade between 2007 and 2012.

The Treasurer of the Lalyans Seselwa is a wealthy Seychellois-Indian businessman, Dr. Vaithinathaswamy Ramadoss, who was previously Chairman of the Seychelles Chamber of Commerce and Industry and also Treasurer of the Parti Lepep from January to August 2012.

In an interview with daily newspaper TODAY in Seychelles on Thursday, Pillay said “it is not our opponents’ weaknesses or faults which make our strength, but rather it is our beliefs, plans and vision for our cause which define us and very soon all these will be revealed to the public so that they can decide.”

In Saturday's edition of the newspaper, it was confirmed by Pillay that former government minister William Herminie, who served in various ministries between 1988-2004, as well as former government minister from 1998-2006 and Seychelles high commissioner to South Africa from 2007-2009, Noellie Alexander, are undertaking mobilisation and communication roles within the newly formed party.

Commenting on the recent development of a breakaway faction, the founding President of the Parti Lepep, France Albert Rene affirmed that he did not support the new party.

“I do not support people who conspire against the beliefs of this party. To me they are traitors to their own beliefs,” he said in last week’s edition of Parti Lepep's mouthpiece, ‘The People’.

‘Parti Lepep’ was founded 50 years ago in 1964 by France Albert Rene when at the time it was known as the ‘Seychelles People’s United Party’ (SPUP).

It became the ‘Seychelles People's Progressive Front’ (SPPF) in June 1978 and in June 2009 the party’s name changed for a third time to what it is known as today, ‘Parti Lepep’. Rene served as President of the Seychelles from 1977 until 2004, when he retired.

The Independent Conservative Union of Seychelles (ICUS), was registered by the Electoral Commission a month ago.

The ICUS’s leaders have expressed their aim to take part in both the next presidential and legislative elections.

The party has Jona Alcindor as its leader, Ralph Ernesta as deputy leader and Mike Chadstone who is the party’s founder, as secretary general.

Chadstone, who is also the party’s spokesperson, told SNA that ICUS, whose motto is 'celebrating the birth of a new vision of hope for Seychelles' was responding to “the thirst for a new political party among the population.”

Chadstone who said he is now full-time in politics has in the past worked for the Seychelles ministry of education  and most recently he was a business studies lecturer in Qatar.

“No election is easy and you cannot predict the outcome but based on the fact that we know that people are tired of the political landscape and they want something new… we find ourselves in a position where we cannot guarantee a total win, but we can make a big difference,” said Chadstone.

“We are founded on democracy. One key focus is giving equal opportunities to everyone particularly women and youth to be empowered to take leadership roles, and we also have a national development plan which is for a hundred years. I will not be here in 25 years, in a hundred years, but the plan will set forth what Seychelles needs to achieve.”

Alcindor, Ernesta and Chadstone told SNA that they had all intended to present their candidacy individually for the next presidential elections before joining together as ICUS and that it will not be necessarily one of them that will stand as the presidential candidate.

The party is now planning a series of preliminary elections across the country, which started Saturday April 25, for their members to choose who they want to have as their presidential candidate.

“We will go through all the districts and ask the members to nominate and vote for who they think will be a good presidential candidate. When we have been round all the districts we will have our caucus and have all candidates present their plan for Seychelles and our members will decide who came out more and have him or her as our presidential candidate…The others will be candidates for the national assembly elections,” said Chadstone.

Alcindor, Ernesta and Chadstone have all been involved in politics in one way or another in the past. Chadstone was going to stand as the vice-presidential candidate of Viral Dhanjee, a Seychellois citizen who attempted to enter the 2011 presidential race, and was disqualified by the Electoral Commission for not meeting the set criteria.

Alcindor was the campaign manager for the Popular Democratic Movement (PDM) led by the leader of the opposition in the National Assembly, David Pierre, in the last legislative elections.

“It’s not going to be easy but I believe we can do it…as a woman my role is to administer the party and bring it forward,” Alcindor told SNA.

As for Ernesta, a businessman in the construction field, he stood as the PDM candidate in the Anse Etoile district, in the northern part of the Seychelles main island of Mahé during the same election, but did not win the majority vote.

“I enjoy democracy when people are free to express themselves. I have seized the opportunity to join ICUS because I appreciate what Mr Chadstone is putting forward," said Ernesta. "ICUS's programme will bring a better life for all Seychellois. I believe it will bring prosperity for all. My aim in politics is to help bring about a change in the country.”

No date set yet

The last presidential election in Seychelles was held in May 2011, and the parliamentary elections took place in September the same year.

According to the country’s constitutional requirements, the next presidential election should be organised within 90 days after January 2016.

Local media have already begun to speculate that the head of state will take a gamble and call early presidential elections before the end of this year, which he is permitted to do according to the 5th amendment of the Seychelles constitution.

Responding to the rumours of an early election in an interview with SNA in February, Michel said he had not yet made a decision yet, adding that the matter was still “to be decided.”

Michel’s candidacy still needs to be officially confirmed by Parti Lepep’s Congress, which according to Friday's edition of 'The People' newspaper is scheduled to take place in June.