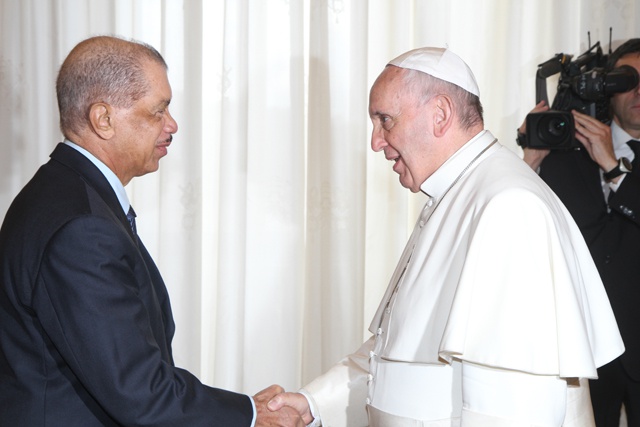 (Seychelles News Agency) - The President of the Seychelles, James Michel, has extended a formal invitation to Pope Francis I to visit the Indian Ocean archipelago of Seychelles.

The President is on an official visit to the Vatican this week to strengthen ties between the Seychelles and the Roman Catholic Church.

Roman Catholics make up the majority of the archipelago’s 90,000 population, with the Seychelles National Bureau of Statistics putting the figure at 76.2 percent.

In a press statement issued by State House on Friday morning, President Michel said that Christian values were "the most important elements" that united the people of Seychelles as a nation which allowed the "country to develop in peace and unity".

Michel thanked the Roman Catholic Church for its contribution to the welfare of the Seychellois people through spiritual work, education and social services.

In the discussions, President Michel welcomed the foresight and vision of the Pope on major issues affecting the modern world and the Church, and praised Francis for his stance on welcoming intercultural and interreligious dialogue.

The two also turned their attention to climate change, an important topic to both the Seychelles Head of State and the Argentinian-born pontiff.

This week, church leaders convened at the Vatican with politicians, scientists and economists to draft a strongly-worded statement affirming not only the 'scientific reality' of climate change but also the moral and religious responsibility to do something about it.

Pope Francis himself is expected to deliver a major papal encyclical on Human Ecology in September to the United Nations General Assembly.

"The Pope congratulated President Michel for his determined leadership that leads on these critical issues together with other island states to fight against the impact of climate change," read the State House statement.

The Pope stated his belief that creation is a "wonderful gift from God", adding that it must be taken care of with "respect and gratitude" for the benefit of everyone.

President Michel also supported the Pope's drive to fight against poverty and growing inequality in the world, and said he agreed that people and their well-being should always be placed at the centre of economic and political decisions.

"We recognise that the progress of a nation is measured not only by economic indicators," said Michel. "Our ambition in Seychelles is to build a prosperous country with a high quality of life in line with our cultural and spiritual values."

Towards the end of the papal audience, Pope Francis gave his blessings to "Seychelles and to the Seychellois people, for President Michel and his government he leads and his family" saying he keeps them in his prayers in faith and communion.

The Pope also expressed his wish for peace for the entire nation of Seychellois people in the construction of the country's future "based on spiritual and human values".

Although this is President Michel's third visit to the Holy See since he became head of state, it is his first time meeting the popular Pope Francis, who was elected to the Roman Catholic Church’s top position by a papal conclave in March 2013 after the unexpected resignation of Pope Benedict XVI the month before.