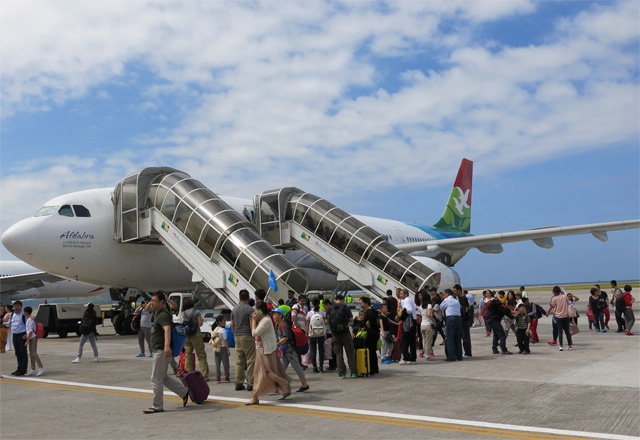 (Seychelles News Agency) - Seychelles was ranked 2nd in Africa, after South Africa in the World Economic Forum’s Travel and Tourism Competitiveness Index 2015. Compared to the 2013 report, the small island state dropped from 38th to 54th place globally out of 141 countries, with its overall index result sliding from 4.51 to 4.0

The islands’ indices for price competitiveness, cultural resources and business travel were the main factors in the lower rankings.

At first place in Sub-Saharan Africa, South Africa rose from 64 place in 2013 to score 48th in the world in 2015, while Seychelles’ neighbouring island of Mauritius was placed third, and improved on its global rankings by two points from 58 in 2013 to 56 in 2015.

The 115-island archipelago of Seychelles, famous for its crystal-clear warm waters, picturesque tropical beaches and population of just 90,000 people, has built a reputation as a small but luxurious holiday destination, welcoming just over 230,000 international visitors to its warm shores in 2014.

However, it’s not just arrivals that play a role in determining the rankings in the biennial report, and the WEF scores each country based on 14 sub-indices under four pillars, namely: Enabling Environment, Travel and Tourism Policy, Infrastructure and Natural and Cultural Resources.

The report is compiled from a wide variety of reputable data sources, including the World Bank, UNESCO, the World Health Organisation, the United Nations Office on Drugs and Crime and the World Tourism Organisation.

Seychelles’ performance was low under the ‘cultural resources’ pillar, which measures, the availability and promotion of a wide variety of cultural resources for visitors, including archaeological sites, entertainment facilities and conferences.

Seychelles is ranked 85th for ‘natural resources’ and 138 out of 141 for the ‘cultural resources and business travel’ sub-indices.

Commenting on the rating the Seychelles tourism authorities have said that the development of the country’s tourism industry being a collective effort, requiring the input of each and every Seychellois, the nation as a whole should “feel sad and take responsibility for losing our position in international ratings.”

“Whenever we witness such a fall in ratings, it means that the Seychelles brand has to some extent become eroded, has lost ground against its competitors and ceases to resonate as it should,” the Seychelles Tourism Board’s Chief Executive, Sherin Naiken, told SNA in an emailed response.

Tourism being the main pillar of the Indian Ocean archipelago’s economy has witnessed considerable development and investment in the sector in recent years with more hotels, restaurants and other tourism-related services springing up requiring more human resources which is one of the areas where Seychelles' performance has declined in the index.

“We recognize this problem and are working hard to address it in collaboration with our trade partners and tourism stakeholders, however we should not lose sight of the fact that working in tourism is a vocation and must be rooted in the love of one’s job and this is, sadly, not always the case,” said Naiken.

The Seychelles’ main market is Europe while there are also new emerging markets being targeted and air transport remains a key factor in attracting more visitors to the island destination.

Air Seychelles re-launched flights to Paris via Abu Dhabi at the beginning of July last year after a two and a half year absence operating twice weekly flights between Seychelles and Paris.

The lack of non-stop flights was one of the main complaints of people travelling between the two destinations.

With France being the long-time main market for Seychelles aside of last year when it was overtaken by Germany, some of the top French tour operators marketing Seychelles as a tourist destination also highlighted this concern as one of their main challenges during a meeting with the Seychelles tourism authorities in France last year.

In spite of the effect this has had on visitor numbers, with the lack of non-stop flights contributing to the loss of mainly the elderly and visitors flying in with their family, Naiken has expressed satisfaction vis-à-vis the forthcoming resumption of non-stop flights to Paris as well as having direct flights to China later this year.

In terms of price competitiveness, while STB has accepted the fact that a Seychelles holiday will always be more expensive than a vacation in a mass tourism destination, the practice of excessive pricing of certain accommodation and other tourism services is said to be “compromising our image and reputation as a tourism destination offering value for money.”

With regards to Seychelles losing its first place worldwide achieved in 2013 for the ‘prioritising travel and tourism’ sub-index, Naiken noted that the STB witnessed considerable budget cuts in 2014 which she says affected the board’s ability to compete with other countries’ tourism boards who were able to afford more expensive promotional campaigns.

However, she stressed that only marketing will not raise tourism numbers and that there needs to be quality products.

“We will continue to encourage all Seychellois, in every walk of life, to take ownership of, and responsibility for, their tourism industry and to become ambassadors for it. We shall also be supporting the initiative by the Chamber of Commerce and Industries to promote Mon Sesel Sa! (It’s my Seychelles) - a campaign designed to strengthen the industry at grass-roots level and to enhance current standards of service.”

The Seychelles Hospitality and Tourism Association (SHTA) is of the view that this is a valuable report, which they will have to go through in detail while adding that the association generally find the findings to be "fair and will help us see where we can work to improve"

"It is clear that we need to work towards becoming more prepared to capture new opportunities presented by new trends in travel and social expectations, and to be more resilient and respond faster to any shocks or crisis that affect our business," SHTA's Executive Director, Kate Carolus told SNA in an email.

"Interministerial coordination and public-private sector partnerships to overcome financial, institutional and organisational bottlenecks have been put in place and it is time now to move beyond expressions of willingness to action."

The 2015 report ranked Spain as the most competitive country in the world for travel and tourism, followed by France, Germany, the United States, the United Kingdom, Switzerland and Australia.

At the bottom of the 141-country list were Chad, Guinea, Angola, Yemen and Mauritania.