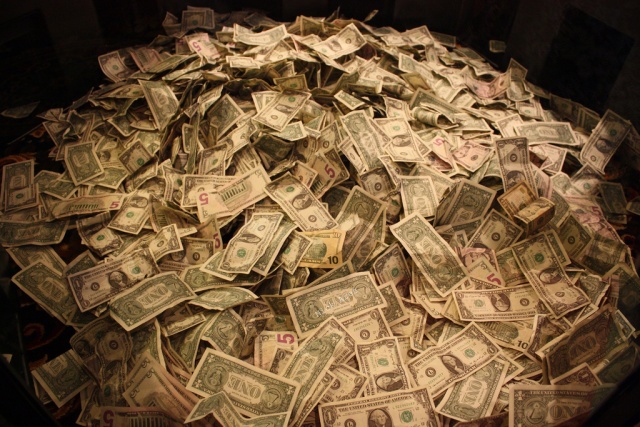 A lot of dollars ( reynermedia, Flickr) Photo License: CC BY 2.0

(Seychelles News Agency) - The Seychelles Financial Intelligence Unit (FIU) has called for greater controls in the financial services offshore sector after investigators have linked offshore companies registered in Seychelles to the bribery of Indian government officials.

In a statement released Monday April 21, the FIU said it has launched an investigation after a federal grand jury indictment in the United States found that a wide range of offshore companies registered throughout the world including Seychelles were allegedly used by the defendants to pay at least $18 million in bribes to Indian government officials in return for titanium mining rights in the poverty-stricken eastern coastal state of Andhra Pradesh.

One of the defendants, Ukrainian national Dmitry Firtash, was arrested last month in Vienna, Austria and is currently undergoing extradition to the United States. Five other defendants remain at large.

This has been reported by international media such as Bloomberg and UK’s The Independent.

The FBI is said to have uncovered 57 suspicious transfers of funds and seeks to recover assets from a total of 159 companies registered in Austria, the British Virgin Islands, Cyprus, Germany, Hungary, the Netherlands, Seychelles, Switzerland and the United Kingdom.

According to the FIU statement, Seychelles has been cooperating with international authorities and has confirmed that a “significant number” of offshore companies within its jurisdiction have been linked to the investigation.

The FIU noted that it has become “increasingly concerned” with the damage done to the Seychelles’ track record as a reputable international financial services centre, and says it is unfair to the majority of law-abiding people working in the industry that Seychelles is now perceived by the international community as place where money can easily be laundered.

Seychelles was in November 2013 declared by the Organisation for Economic Development (OECD)’s Global Forum on Transparency and Exchange of Information for Tax Purposes as “non-compliant” along with Switzerland and Cyprus reinforcing the need for the Seychelles to re-establish its reputation as a State committed to preventing the use of its jurisdiction for criminal and terrorist financing purposes.

Seychelles defended its reputation, saying it was committed to implementing internationally agreed tax standards, but that delays were experienced in introducing new legislation following two elections.

This is the latest in a number of cases being investigated by the FIU involving organized crime linked to Eastern European and Russian-owned offshore companies in Seychelles.

FIU is currently investigating claims that members of the former Ukrainian government were laundering money through the Indian Ocean archipelago’s offshore companies sector and recently the FIU also acted against suspected Russian computer hackers by seizing over $325 thousand held in a Seychelles-registered offshore account.

According to the FIU, decisive action is needed to send a clear message to international criminals.

“Government policy makers, law makers, state agencies and responsible industry stakeholders need to work together to mitigate the risk of legal offshore structures being used to facilitate corruption and profiteering from organized crime such as drug-trafficking, cybercrime, fraud, prostitution and the sexual exploitation of children,” said the statement.

“In international terms, our reputation is being placed at risk by existing practices and we need to adapt urgently if we are not to become permanently tainted as facilitators of crime and corruption. It is important that we now put in place an improved protective framework for our society and our standing in the international community.”