A new record in arrivals: Seychelles tourism up by 15% 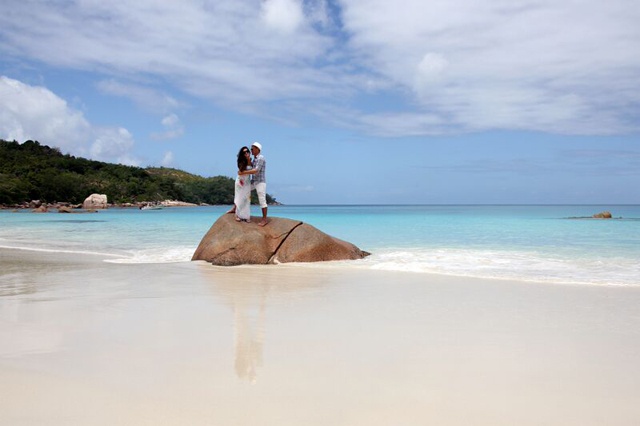 (Seychelles News Agency) - The Seychelles islands are becoming an increasingly popular tourist destination after a 15 percent increase in arrivals has been recorded for January to April 2015 when compared with the same period the previous year.

During 2014, the number of visitors which came to the Indian Ocean archipelago of 115 islands were almost at equilibrium compared to 2013, recording only a one percent increase in visitors, but the year 2015 seems likely to be a good year for the Seychelles tourism industry.

According to the National Bureau of Statistics, NBS, the months of March and April of this year recorded the highest number of visitors since January 2009 with 25,129 and 25,038 visitor arrivals respectively; a very promising figure for the small island state with a population of 90,000.

Tourism is the main pillar of the Seychelles economy. The island nation, which is situated in the Indian Ocean, east of the African Coast and northeast of Madagascar is known for its white sandy beaches, turquoise sea water and its unique, well-preserved environment.

In press statement issued by the Ministry of Tourism and Culture, the CEO of the Seychelles Tourism Board (STB) Sherin Naiken said that the marketing strategy of Seychelles is bearing fruit.

“The figure is a positive sign for the STB and for our country because it represents the fruits of our concerted hard work,” said Naiken.

Dubai-based Emirates Airlines is planning to add more seats on its Seychelles-bound flights by 1,722 additional seats per week as from the first of June.

Since the beginning of 2015, a total of 103,258 visitors arrived in Seychelles. According to the NBS, this represents a 15 percent increase in arrivals as compared to the same period in 2014.

France, Germany, Italy, the United Arab Emirates, China and Russia are the main markets for Seychelles.

With the exception of a two percent decrease of visitors coming from Germany and 19 percent from Russia, all other source market indicators are positive.

Even the Indian market, which has in previous years experienced many difficulties, appears to be changing the trend with an increase of 114 percent of Indians choosing to visit the Seychelles archipelago.

The archipelago’s national airline, Air Seychelles, began thrice-weekly flights to Mumbai last year, and has since increased frequency on the route to four flights a week.

However since the beginning of the year, the most remarkable increase remains Reunion, a neighbouring French overseas department in the Indian Ocean, with an increase of over 313 percent.

The Seychelles Minister for Tourism and Culture, Alain St. Ange, commended the work accomplished so far between the private and public sector.

“This is why the country has now moved focus from marketing… [to] looking at the product as a whole and addressing a hotel classification and grading system,” said Minister St. Ange.