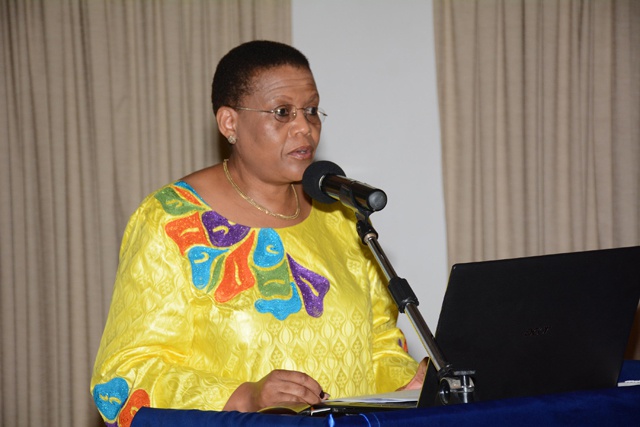 The African Union's Special Rapporteur on Expression and Access to Information in Africa, Pansy Tlakula, giving her keynote address at the symposium's opening ceremony (Seychelles Nation)

(Seychelles News Agency) - Adapting and approving legislation concerning access to information (ATI) based on the African Union's (AU) Model Law has been given a boost in the Seychelles after receiving what has been described as "political will at the highest level".

This remark was made by Maxwell Kadiri, a legal representative from the Open Society Justice Initiative who was accompanying the AU's Special Rapporteur on Expression and Access to Information in Africa, Pansy Tlakula.

The AU delegation was in the 115-island archipelago of 90,000 people to attend a two-day symposium organised by the Seychelles Media Commission (SMC) on Monday and Tuesday this week, which brought together media representatives, legal experts, the human rights commission, government officials and civil society organisations to start work on drafting the law to be adopted in Seychelles.

The symposium also received a visit from the President of Seychelles, James Michel, who attended the opening ceremony and also listened to some of the technical presentations.

Parts of the model law discussed include preliminary provisions, exemptions, oversight mechanisms and the scope of application to see what would work for Seychelles. Discussions included recommendations of what should be kept, added to or removed from the AU model ATI law when drafting the Seychelles version.

In her keynote address at the symposium's opening ceremony, Tlakula said she was "extremely pleased" that the process had begun with a broad-based consultation, and added that a long-term plan for capacity-building and public awareness was essential to prevent the law from having a real impact to the lives of citizens.

Tlakula advised all present at the symposium to look ahead to the implementation of the law.

"ATI advocates in Seychelles should begin to more vigorously explore the utilisation of the constitutional guarantee of access to information for the advancement of the rights of ordinary people," she said, adding it would create greater awareness and the gradual realisation of the advantages that the ATI legislation would bring to all once adopted.

Tlakula also highlighted the need to use the law to help marginalised and vulnerable groups such as women, children and persons living with disabiltiies.

"By equipping these groups with the necessary tools to strategically utilise access to information as a tool for addressing the most pressing challenges they face in their everyday lives, possibilities abound for access to information to play a transformative role in the lives of these people," she said.

'Political will at the highest level' - Kadiri

Sweden adopted first ATI law the world has ever known in 1766. Today, 16 African countries have ATI laws and many more have bills at several levels of consideration for adoption.

The process in some of the African countries where the law has been adopted was quite lengthy, for example in Nigeria it took 18 years. It is hoped that Seychelles will be able to fast-track the process provided there is a widespread engagement of all parties concerned.

"...You’ve got political will at the highest level at the office of the president, which certainly means that we are not looking at 18 years... there are other examples, [such as] in Ghana; the president kept it in cabinet for eight years because there was no political will," Kadiri told SNA in an interview at the conclusion of the symposium.

In January, President Michel confirmed his government’s support to hold further consultations for the development of legislation during the initial visit of Tlakula.

Kadiri said that it was essential for the consultations to include as many different stakeholders and as many participants as possible for robust debate and eventually widespread consensus.

The Chairperson of the SMC, Ibrahim Afif, described the turnout for the symposium as "reasonable", and said this was only the beginning of an ongoing process of raising awareness of the need for ATI legislation.

"Not everybody was here today but we will go and discuss with people who we think should have a say in this we will invite them later on to be able to complete the discussion as much as possible," Afif told SNA in an interview.

Afif told SNA that the consultations and drafting would take approximately 15 to 18 months. The recommendations will then be passed on to government, which will then pass it on to legislation and lastly on to the National Assembly.

"We are hoping the whole process can be completed by 2017. That’s what we would like to do - it can be faster depending on how we go," said Afif.

He added that although legislation was the responsibility of the Attorney General’s office, the SMC-led consultations would have done a substantial amount of work towards putting forward the best practice.

"It’s not our law per se… it’s about trying to do something to facilitate and to bring about an act which we think is important for Seychelles," he concluded.

An ATI law would consolidate and give substance to article 28 of the Seychelles Constitution, which recognises the right of access to official information for all of its citizens.