Seychelles aiming for ‘A’ accreditation in human rights with Commonwealth guidance 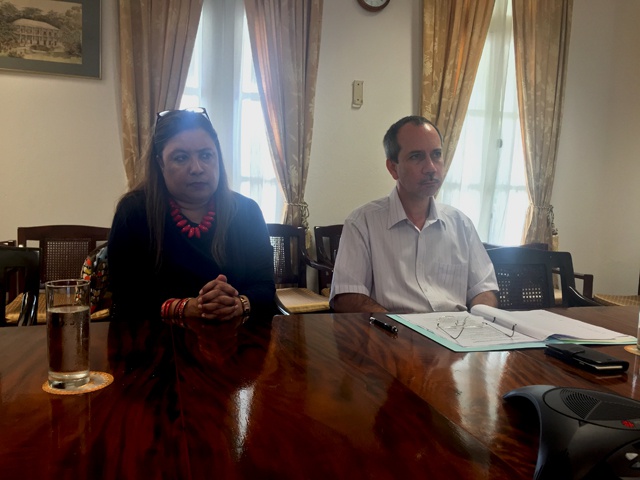 The Indian Ocean archipelago of Seychelles is aiming to re-structure its human rights commission and amend its legislation to comply with the United Nations’ international standards.

This is according to Seychelles’ Foreign Affairs and Transport Minister, Joel Morgan, who was speaking at a press conference held on Friday afternoon in conjunction with the Head of Human Rights Unit of the Commonwealth, Advocate Karen McKenzie in the Seychelles capital of Victoria.

The latter had ended a series of consultations with government and the public on how to bring Seychelles’ Protection of Human Rights Act 2009 into compliance with the Paris Principles adopted as an official international human rights standard by the United Nations General Assembly in 1993.

McKenzie said that in the Commonwealth’s view, it was important for the National Human Rights Commission (NHRC) of any Commonwealth country to be compliant with the Paris Principles.

“This has been a commitment which has been made by all heads of government in the Commonwealth, that that is something that should be pursued, because these institutions are the apex of a national human rights protection system,” said McKenzie.

The small island developing state with its population of 90,000 people has ratified most of the UN conventions on human rights, including the Convention on the Rights of the Child, the International Covenant on Civil and Political Rights and the Convention on the Elimination of All Forms of Discrimination against Women.

2011 was the last time the UN’s Human Rights Committee reported on Seychelles’ progress in the field of human rights, and they noted that Seychelles had “failed to honour its reporting obligations under article 40 of the Covenant,” adding that the initial report had not been submitted although it had been due since 1993.

All UN member states undergo a review of their human rights landscapes every four and a half years under the Universal Periodic Review (UPR), and the Seychelles NHCR is expected to submit its next UPR report by October this year.

‘Paris Principles should be the starting point’

The chairperson of the NHRC, Dora Zatte, is currently the only full-time staff member of the institution, along with two part-time commissioners, and the lack of budgetary resources and institutional capacity has been pointed out as the main reason for its inability to carry out its mandate effectively.

McKenzie said there are problems with the current format of the human rights legislation and institutions in the country.

“The Paris Principles ought to be the starting point for any establishment, strengthening or operationalisation of a national human rights institution, but it is commendable that there is a structure there, that there is a piece of legislation there; all that needs to be done is for that to be firmed up, for it to be strengthened.”

McKenzie said she was hopeful that with government’s firm commitment, the human rights commission would be able to put forth an application for Paris Principles accreditation in the shortest possible time.

Foreign Affairs minister Joel Morgan affirmed the government’s will to become Paris Principle compliant with regards to human rights, adding that Seychelles would be guided by the recommendations and support provided by the workshops and public consultation processes.

“There will be a next step where we will take on board the recommendations and do another round of consultations, once we are ready, to propose a new structure that would help us to become more compliant with the Paris Principles,” said Minister Morgan.

“What we have agreed is that we will work in that direction as quickly as possible to go for accreditation, and I don’t mean Grade C accreditation, we want to really be up there, among the best. I think we can do it,” he explained.

“I think it takes a little bit of work from the legal instruments point of view, from the institutional point of view, and we also need to review whether we have one model, which is the Ombudsman and the Commission as it is now, or we have a hybrid model... or we separate the two institutions out completely.”

Preparing for the UPR

In terms of the upcoming Universal Periodic Review, McKenzie said the Commonwealth’s Human Rights Unit worked to ensure that all Commonwealth member states improved through each review.

“We have... tried to prepare the Seychelles Human Rights Treaty Committee because it has to do some of the heavy lifting going forward in terms of preparing that first draft of the national report for consideration,” she said.

Advocate McKenzie said the national report involved collating information across ministries and compiling it into a substantive draft report.

“We will of course be supporting government through every step of the process until the report has been tabled,” she said. “We will also be supporting the National Human Rights Commission to prepare its first submission to the UPR, and their report has to be with the Council by the end of June.”

McKenzie and her team have also been helping government to put together its National Human Rights Action Plan, which would create a framework from which progress can easily be monitored by the treaty committee.

The Commonwealth team will also be supporting an institutional needs assessment, which will assess the current institutional framework of the commission and investigate what has been achieved since the institution was established.

Including civil society in human rights

McKenzie also explained that the Paris Principles also set out rules concerning the appointment procedure for national human rights commissions, explaining that commissioners had to be independently and transparently appointed and inclusive of civil society.

Minister Morgan echoed these sentiments, stating that faith-based organisations and other NGOs would have to become an integral part of the new human rights commission.

“Evidently, quite willingly, we would want to have a wider participatory base in terms of the commission in order to be able to ensure that there is correct representation that have to do with civil society and are in touch with the people on a day to day basis in relation to various things like human rights education, human rights reporting, the ability to go out there and assess what people are being subjugated to or not as the case may be in terms of human rights violations,” said Morgan.

The minister also said that the national action plan would include various elements, including an educational element similar to the one done recently in Seychelles with the anti-human trafficking framework.

“If you recall last year, we modified our laws, we brought in new legislation for human trafficking, and we constituted a national committee for human trafficking, and we also had a plan of action which is now being followed through, which included extensive media coverage, there was a huge awareness drive; there were posters, there were adverts in the papers, and I think the same thing can be done as soon as our national action plan is ready and has been approved for implementation,” said Minister Morgan.

The human rights advocate said that ultimately, the national human rights commission would be held accountable not only by the National Assembly, to which it would have to submit annual reports, but also to civil society.

“Civil society would make quite a bit of noise if the institution is not doing what it is supposed to be doing, and civil society is also part of the voices that the accreditation committee looks at when they are accrediting an institution. If civil society has negative reporting then it is something they look at,” said McKenzie.

Additionally, she remarked that the Seychelles’ national human rights commission, once set up correctly, would eventually become accountable to itself as well.

“Once the institution is up and running and it gets into the way of working of such an institution, it will work to jealously protect its accreditation status,” she explained. “In Africa, the Commonwealth has the highest number of A-accredited institutions, and they vie [with each other], it is a privilege to be holding that, and when there is an issue that threatens that A-accreditation, they are very quick to do whatever needs to be done to protect that accreditation.”

Minister Morgan pointed to human rights being more than something that regulated government institutions.

However, Morgan is of the opinion that most Seychellois have a good sense of what human rights entails.

“Generally, I think our population is quite sharp, quite sensitised, and quite vocal when it comes to certain issues where they feel their rights are being [violated], and that’s a good thing, because it keeps up the awareness, be it on social media, be it in letters written in newspapers or be it in complaints to the office of the ombudsman or the human rights commission,” he said.

“I know that there are about thirty complaints a month to the human rights commission, so already people are aware that they can complain, but whether the commission can be effective at this point in time or not is really the key element on which we need to focus.”