Seychelles will not turn a blind eye to human trafficking, says Minister for Social Affairs 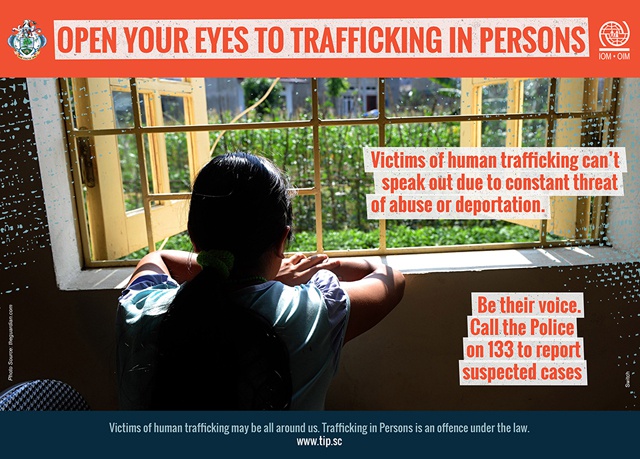 Adverts containing information on how to spot the signs of human trafficking are being run in various media publications and broadcasters as part of a new national awareness campaign in Seychelles. (Trafficking in Persons in Seychelles)

(Seychelles News Agency) - Seychellois citizens are being urged to keep their eyes open for possible cases of human trafficking and report them to the authorities. A new campaign against the global problem was launched by the government of Seychelles on Monday.

Victims of human trafficking may be all around us, but we may not recognise the signs. Forced labour, prostitution, domestic servitude and begging are by their very nature difficult to detect, meaning that victims often face years and sometimes even a lifetime trapped in slavery.

According to a report in local newspaper Today in Seychelles, the Minister for Social Affairs, Community Development and Sports, Vincent Meriton, said that the country’s National Action Plan and Strategic Framework aimed to introduce new initiatives as well as support existing measures to combat any instances of human trafficking in the tiny Indian Ocean archipelago of 90,000 people.

“Human trafficking in its simplest term is modern-day slavery,” said Minister Meriton at the opening of a two-day workshop to launch the campaign. “It is truly horrifying to note that today, there are more people trafficked each year than the total number of those trafficked during the entire 350 years of the transatlantic slave trade.”

“As a country committed to the promotion and protection of human rights, Seychelles will not turn a blind eye to this gross violation,” added the minister.

The minister unveiled a new website called Trafficking in Persons in Seychelles which Seychellois can refer to for more information on the different forms of human trafficking and what to do if they detect a case.

According to the International Labour Organization, there are an estimated 20 million victims of human trafficking globally, and the United Nations Office for Drugs and Crime (UNODC)'s 2012 Global Report on Trafficking in Persons says that trafficking for the purpose of sexual exploitation accounts for 58 percent of all trafficking cases detected globally, while trafficking for forced labour accounts for 36 per cent.

The new national awareness campaign in Seychelles is sponsored by the International Office for Migration through the Ministry of Foreign Affairs, and adverts containing information on how to spot the signs of human trafficking are being run in various media publications and broadcasters.

In 2013, Seychelles was placed on the US State Department’s annual Trafficking in Persons (TIP) Report Tier 2 Watchlist for the second consecutive year, after the United Nations’ Special Rapporteur on trafficking in persons, Joy Ngozi Ezeilo, also warned that human trafficking in the Seychelles, with its regular influx of tourists and migrant workers, was “insidious” and remained hidden due to a lack of awareness.

In June this year, the US State Department removed Seychelles from the Tier 2 Watchlist and upgraded the island nation to Tier 2, the category given to countries whose “governments do not fully comply with the Trafficking Victims Protection Act (TVPA)’s minimum standards, but are making significant efforts to bring themselves into compliance with those standards”, according to the State Department’s website.

This year’s rise in the rankings was mostly thanks to recent legislation passed in the National Assembly to address incidents of human trafficking. Traffickers face up to 25 years in jail and a fine of up to SCR800,000 (around $56,000) for human trafficking if found guilty.

How to spot the signs

According to the new Trafficking in Persons in Seychelles website, money is the primary motivator behind human trafficking, where a victim is sold or used over and over again to make money for the trafficker.

It’s so hard to tell if a person is a victim of trafficking that at times even the victims themselves are unaware that a crime is being committed. Victims often come from very poor and under-privileged backgrounds and are scared into submission with threats of deportation, imprisonment or even harm to the victim’s family if the victim should go to the authorities or complain to anyone.

Traffickers tend to prey on victims who are looking for the promise of a better life, a job opportunity or even the safety and security of a romantic relationship.

If you know someone who is escorted or watched all the time, does not have access to his or her own identity documents, shows signs of fear or marks from physical assault, that person may be a victim.

The TIP website advises anyone who thinks they may have detected a case to put the safety of the victim and the public first, and says the suspected trafficker should never be confronted directly, and neither should a victim be alerted. The police can be contacted anonymously on 133 to report any suspicions.