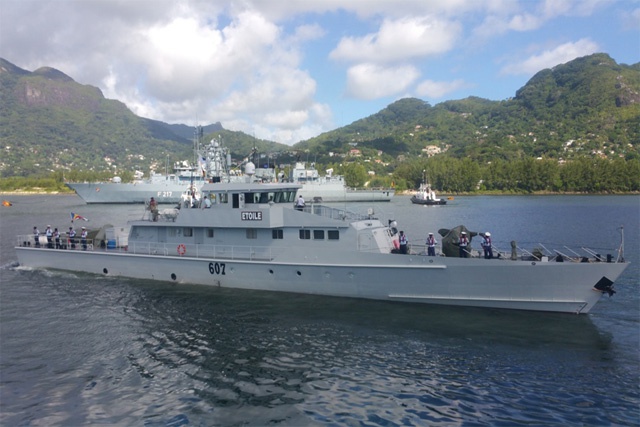 File Photo: Coast Guard Vessel 'Etoile' out at sea. Etoile together with Andromace

(Seychelles News Agency) - The Military Police Unit of the Seychelles People’s Defence Forces (SPDF) is leading investigations following the discovery of what has been described as “controlled substances in the form of herbal materials” on one of the island nation’s coast guard vessel’s during the weekend.

This was reported in a press statement issued by the SPDF on Monday, following the arrival of the two Coast Guard vessels in Port Victoria on Saturday.

Andromache and Etoile, were carrying a total of 60 personnel and had participated in a military exercise ‘Diana 2015’ held in Madagascar from May 18 to 26 alongside other Indian Ocean forces from the Comoros, Mauritius and Madagascar as well as the French Forces of the Southern Indian Ocean, based in Reunion island.

“On arrival at the Coast Guard Base, SPDF Military Police initiated a search onboard both ships, during which certain amount of controlled substances in the form of herbal material was recovered in one compartment onboard one of the ships,” reads the SPDF statement.

“The Military Police sought the expertise of the NDEA and the Military Dog Unit in this operation. Ongoing investigation regarding the issue is being undertaken by SPDF.”

Responding to SNA in an email this afternoon, the Public Relations Officer of the SPDF, Major Jean Attala did not give further details about the substance recovered nor the ship involved.

“…SPDF is carrying out an investigation regarding the incident and in doing so certain personnel are being interviewed and given the circumstances, we are not in a position to provide such detailed information that may jeopardize the ongoing investigations,” said Attala.

He nevertheless confirmed to SNA that the Military Police is leading the investigation as “it has jurisdiction as regards to law enforcement issues that relates to military personnel, facilities and assets.”

With regards to whether it is normal procedure to search Coast Guard vessels after a mission out at sea Attala said that as part of their duties the SPDF Military Police usually conduct searches whenever the need arises and even at random.

Contacted by SNA, the Deputy Chief Officer of the Seychelles National Drugs Enforcement Agency, Liam Quinn confirmed that the NDEA is collaborating with the Military Police in the ongoing investigation.

“The herbal material has been seized by the NDEA,” said Quinn while adding that the amount and type of substance seized have not yet been determined.