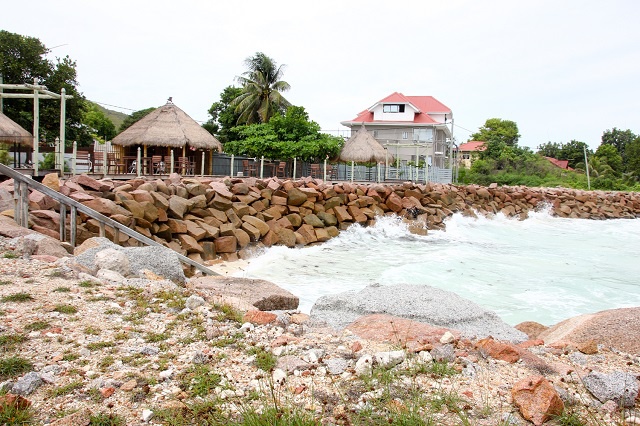 For years, the inhabitants of Anse kerlan have been marred by the rising tidal waves as is steals their lands and damaged their properties. Now a new project looks at providing remedies to this nightmarish situation by bringing the community together for a common goal; create a cocoon of rock armouring to stop sand migration. (Romano Laurence)

(Seychelles News Agency) - One clearly visible sign of the vulnerability of the Seychelles islands to the effects of climate change lies on the Indian Ocean archipelago’s coastlines where several shorelines have been subjected to intense degradation and erosion.

North East Point, situated in the northern part of the main island of Mahé, Anse La Mouche (Bay of the Fly) in the western part of Mahé and even the shoreline near the jetty on third most populated island of La Digue are examples of regions that have borne witness to coastal erosion, mainly due to rising sea levels as well as stronger waves which remove large portions of sand from the beaches.

A one-kilometre stretch of coastline, in the north-western part of the Seychelles' second most populated island of Praslin, more precisely at Anse Kerlan, have also been subjected to the same, where more than 10 families have been at the mercy of tidal waves for years.

“Trees fall with every monsoon, our walls crumble, and our house cracks...some people have left, but we have stayed,” Désiré Éthѐve, a fisherman in his early fifties who was born and raised at Anse Kerlan, told SNA.

At high tide, big waves bash against a small shelter he has built for his boat and quite often the seaweeds that come with the waves are washed up next to the patio of his house built partly of corrugated iron sheets.

“At low tide, we have another type of problem. The sand accumulates in the front yard so much that we cannot plant anything, even the grass and shrubs die,” Éthѐve lamented.

The area was one of the priorities identified as part of a 2011 project undertaken by the Japanese International Corporation Agency (JICA) in the Indian Ocean archipelago of 115 islands.

The project was aimed at identifying the rate at which coastal erosion was occurring at Anse Kerlan and suggesting measures that could be implemented. However, due to budget limitations no mitigation action has thus far been implemented in this area.

This has led a few among the 15 or so families living there to find their own means to build ‘fortresses’ made of large boulders which prevent the waves from removing their land and damaging their property.

But according to consultant Nimham Senaratne, who has been contracted by a local NGO, ‘Anse Kerlan Avangard’ (Anse Kerlan Avant-Garde), this has had a negative impact on the area.

“While the break walls are built individually, they affect each other as they are all along the same beach…,” Senaratne told SNA.

“Those who have built rock armouring walls are protected in some ways although the unprotected areas create other tidal movements that will, in the long run, crumble their structure…”

Taking ownership of their fate

‘Anse Kerlan Avangard’ which brings together most of the families being affected by erosion along the coastal region was formed in 2009 in a bid to take ownership of the problem they were facing.

Going by what the name of their organisation, which means people who are innovative and experimental, the group has been able to record some form of achievement.

In an interview with SNA, the NGO’s Chairman Fulgѐre Morel said that coming together as a group has made it possible to raise awareness about the issue and has even received funding for counter erosion measures.

Mangroves for the Future, MFF, an international organisation that provides grants for different projects relating to effective coastal management and the Australian government have recently responded to their call for help.

Together they have provided the group with 45 thousand US dollars to investigate the impact of this natural occurrence and implement solutions.

Among the solutions being proposed is the construction of rock armouring walls in two specific areas along the coast including in front of Éthѐve’s house.

“We will create a slipway of over 6 metres long and 1.2 metres above water for the fishermen to pull their boats in during high tide. This has never been done before, for everyone was fending for themselves although several of the inhabitants are fishermen,” said Senaratne, during a recent presentation of the project to the community.

He added that over 1900 tonnes of rock will be used in this part of the coastal area, followed by eventual rehabilitation through tree planting exercises.

The project will also include a study of the topography of the area to determine the height of the land compared to the height of the waves that occur around there, as well as a survey of the marine environment in front of Anse Kerlan, to assess the diversity of marine life including coral growth and reef fish that can be found there.

“Due to the sand leaving Anse Kerlan, most of the coral reefs in the area have been destroyed and hence we do not have much marine life anymore,” said Morel noting that some sites further out to sea have adapted to climate change.

Previous studies done by the ‘Anse Kerlan Avangard’ have shown that most of the sand, almost 1.7 cubic metres per year is lost in the sea of Anse Kerlan, and that some are deposited at Amitie, an area a few kilometres away and as the monsoon pattern changes it migrates back to Anse Kerlan.

However, the studies also showed that less than 25 percent of the original eroded sand returns every year to Anse Kerlan leaving its once beautiful sandy beaches adorned with dying trees and exposed to strength of the sea and wind.

The rock armouring along the whole eroded coastline according to Morel "will hopefully prevent this migration of sand."

Looking to the future

The project, however, has not been without adverse effects.

The inhabitants remember how at one point they used to have sea turtles coming to lay their eggs in the area and how the beaches were among the finest there is on Praslin even comparable to Anse Lazio recently graded as the 6th best beach in world by the user-reviewed Tripadvisor website, following similar recognition from travel website Lonely Planet and numerous other travel websites and magazines as well as Anse Georgette.

Now, rock armouring is slowly taking over the coast of Anse Kerlan, little by little.

Asked by SNA if any other measures had been considered, Morel said that "other alternatives are just too costly" emphasizing that this will "hold at least for the next 50 years".

“We think that the situation has been exacerbated by the reclamation of various islands including Eve Island [reclaimed area located on the other side of Praslin Island in the Baie Ste Anne district]. We have lost over 20 metres of land and without these defences, we will lose more…”

Although not all inhabitants of Anse Kerlan live along the coast, the NGO has said that the project will be beneficial to everyone that make up the Praslin community.

“We all need access to the sea. We all go to the beach….When someone on the coast moves uphill displacement of people occurs…” said Morel adding that the NGO would also like to rehabilitate the coastal areas of Anse Kerlan through future projects.