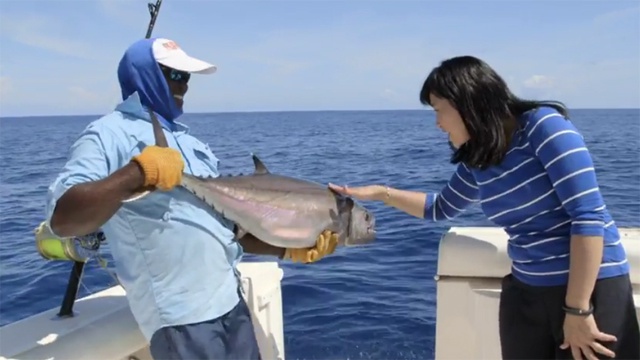 "This is your first time on TV!" quips BBC journalist Carmen Roberts to a dog-tooth tuna before it is released back into the sea (Source: (BBC UK/Travel) © 2015 BBC.)

BBC journalist Carmen Roberts has reported from almost every type of scene, such as tsunami-hit Thailand and even in politically isolated and secretive North Korea. But few spots must have been as enjoyable to cover as the 115-island archipelago of the Seychelles, situated in the warm Indian ocean some 1,500 kilometres off the coast of eastern Africa.

Roberts and her team were in the Seychelles around a month ago, recording a segment for the BBC Travel Show on sustainable fisheries and the Seychelles’ ambitious plan to implement the world’s first country-wide Marine Spatial Plan (MSP).

Currently, only around one percent of the almost 1.4 million square kilometres of the archipelago’s Exclusive Economic Zone (EEZ) is protected as marine reserves, leaving the country’s amazing variety of tropical marine wildlife at risk from overfishing and exploitation, but the marine protected areas are soon set to increase to 30 percent under the MSP.

The television programme, which aired on June 12, featured some of the amazing scenery to be witnessed beneath the calm waters of the archipelago, such as thriving coral reefs, schools of brightly-coloured fish and even a sea turtle, swimming serenely through the water.

Roberts came to investigate a growing niche market for tourism in the Seychelles: big game fishing, and discover the measures the fishermen are implementing to make the sport much more environmentally sustainable.

Hopping aboard a chartered yacht, she and her crew set off and Roberts is introduced to the joys of deep sea fishing, and it’s plain to see she was revelling in the sheer excitement of the sport. The crew caught fish such as bonito, dog-tooth tuna, wahoo and dorado, which were all inspected by an enthusiastic Roberts and then released back into the deep.

This crew is part of an effort to make game fishing in the Seychelles more sustainable - they use a tag and release method instead of the more traditional catch-and-keep method.

For Grant Heyer, the Secretary of the Seychelles Sports Fishing Club (SSFC), game fishing in the Seychelles is beginning to attract a whole new segment of tourists to the islands.

“It’s getting more and more popular every year, and we see a lot of tourists starting to come in specifically just to attend our events,” he told Roberts.

“It’s a very important part of Seychelles’ economy, we have a lot of room to grow, and by more people coming in to just go sports fishing rather than see the island, it’s a different attraction for tourists.”

And according to Heyer, although encouraging other big game fishermen to adopt the ‘catch and release method’ has not been without its challenges, the idea is gaining widespread acceptance.

“In our [fishing] tournaments, we set up rules to allow boats to tag and release, and if they don’t tag and release, they are not eligible to receive a prize,” he explained. “So are all boats tagging and releasing? No, but we’re trying to work with everybody to make sure that that continues in the right direction.”

At this point, Heyer hooks the Holy Grail of big game fishing - a marlin. Roberts looks on incredulously as Heyer is strapped into his chair and prepares for what could be a couple of hours doing battle with the strong and graceful creature.

Eventually, the marlin is brought alongside the boat, where the boat crew tags it and releases it back into the ocean.

The marlin was tagged with its ‘BBC Travel’ satellite tag, and over the next 180 days, the fish’s movements will be monitored to provide environmental researchers with data on the marlins, which are migratory fish and can travel thousands of miles. The fish will be entered into the international Great Marlin Race, and the fish that travels the greatest distance will be considered the winner.

Roberts, grinning from ear to ear, described the feeling of seeing this massive fish up close as “amazing, and such a rush”.

Looking for a way to manage the Seychelles waters sustainably

Back on dry land, Roberts interviewed the Seychelles Minister of Environment, Energy and Climate Change, Didier Dogley, who explained that the marine environment in Seychelles was faced with significant threats.

“Things are changing... I remember when I was a small boy, the corals were in perfect condition and you could basically be in the water for six hours and still enjoy what you’re seeing and discovering. But after 1998, we had a major coral bleaching that killed about 90 percent of our coral, [although] most of it is coming back now,” he told Roberts.

Aside from the pressures of global warming and ocean acidification, Minister Dogley also highlighted pollution from increased development and the threat of overfishing as potential risks to the Seychelles’ marine environment.

“We’re planning to have a marine spatial plan for the whole territory of Seychelles, and it is about 1.4 million square kilometres,” he said. “It has not been done before; this is the first time that any country is doing it. For us it’s a little bit of getting out of the small island mentality and to try and think big and do something which is of paramount importance to the islands here in Seychelles.”

“Tourism will be better in fact, because there will be a lot more places being put under protected areas, and protected areas are where you get the best fish, the best corals, the more exciting place for you to visit,” said Minister Dogley.

Roberts also spoke to the chairperson of the Seychelles Fishing Boat Owners Association, Keith Andre, to get his views on whether the proposed Marine Spatial Plan would have any negative impacts on local artisanal fishermen.

“These people will have to go out a lot further, so going out further would mean more fuel, more time travelling and less time fishing, and a result of this would be you would be getting less fish in, so obviously the prices of fish on the local market... would go up,” he told Roberts.

“The process is still ongoing I believe, and we are following it very closely to make sure that the lives of the local fishermen and the communities that depend on fishing are not affected at all. I believe this fishing method can co-exist with conservation and biodiversity preservation at the same time - if there is the right balance it can co-exist.”