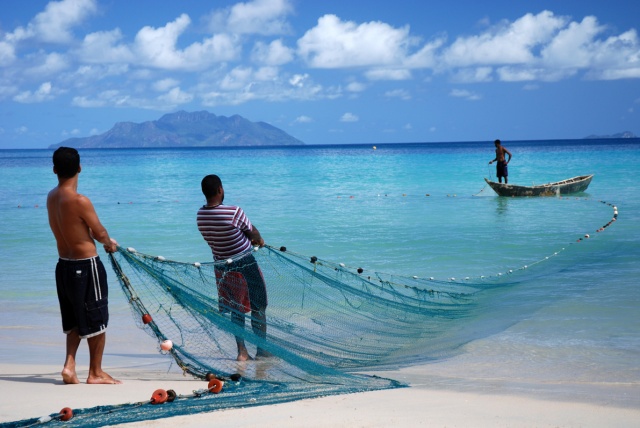 Seychellois fishermen at Beau Vallon beach pulling in their fishing nets. Seychelles relies on the ocean for its fish, as fisheries activities are its second most important source of national revenue, after tourism (Gerard Larose, Seychelles Tourism Board)

(Seychelles News Agency) - The Seychelles minister for Environment, Energy and Climate Change, Didier Dogley, has announced that Seychelles is all set to become the first country in the world that has implemented a comprehensive spatial plan for its entire ocean territory.

The Indian Ocean archipelago of 115 islands, scattered through almost 1.4 million square kilometres of resource-rich waters, is in the process of finalising a marine spatial plan that will see the creation of one of the largest marine reserves in the region.

Currently, only around one percent of the Seychelles' waters are protected as marine national parks, but this percentage could increase to between 10 and 15 percent, pending the finalisation of the plan.

The plan will also protect sustainable artisanal fisheries and create specific zones for exploitative activities, such a commercial tuna fishing and oil exploration and exploitation.

According to Dogley, the only other countries which have developed marine spatial plans are Australia, the United Kingdom and the United States, but these plans only mapped a small portion of those countries’ territorial waters.

Minister Dogley made this announcement on Monday morning while addressing a press conference organised by the Ministry of Finance, Trade and the Blue Economy regarding last week’s debt-for-nature swap agreement signed with the Paris Club group of creditors.

“The marine spatial plan is a plan that decides how we will utilise the spaces of the sea, and that which we call our Exclusive Economic Zone,” said Dogley. “What we have seen in previous years is that we need to come up with a concrete plan on how to utilise these spaces – we already have plans concerning how we will utilise our land, for example by means of our land use plan, but for the sea we have never had one.”

The ministries of environment and finance in Seychelles have already met with all the sectors involved in the use of the sea’s resources, including the tourism, fisheries, transport, environment and oil exploration sectors in the development of the plan.

“We sat everyone down at the table and had a series of discussions over more than a year, where we were seeing exactly how to zone and utilise our marine spaces in a way that is the most effective and in the most organised manner,” said Dogley.

“At the same time, we also discussed potential conflicts that could arise from the utilisation of these spaces, for example, between fishermen and people who are conducting conservation work, and perhaps later when will have petroleum exploitation it could conflict with those who are involved in fishing, so it is very important to go through these processes early on.”

Minister Dogley told the media that negotiations were at an “advanced stage” and that the proposed plan would be presented in its entirety by the end of April for discussion and approval, which he expects to be finalised by June this year.

A ‘huge step forward’ for SIDS

Minister of Finance, Trade and the Blue Economy, Jean Paul Adam, who accompanied the environment minister at the press conference, said the debt-for-nature swap was an innovative deal that would hopefully provide a good precedent for other small island developing states struggling to access concessionary finance for sustainable development projects.

“It must be remembered that debt problems affecting small island states is one of the biggest barriers to development. The reality is that for some islands, due to the sizes of their economies, it is difficult to get finance,” said Minister Adam. “Some island states have higher GDP-per-capita, so that means they do not qualify for access to concessional credit and are forced to take loans at commercial tariffs which elevate their debts… Seychelles is not the only country in this situation.”

Seychelles underwent an IMF-assisted economic reform programme after the country’s 2008 debt crisis when total debt had reached 151 percent of GDP, with external public debt representing almost 95 percent of GDP (US$ 808 million). A large part of Seychelles' debt was towards its Paris Club creditors - an informal grouping of twenty industrialised nations, including France and the United Kingdom - and 40 percent of that debt was in arrears.

The island nation is aiming to bring down its debt-to-GDP ratio to 50 percent by 2018, and the finance minister confirmed that Seychelles’ current debt levels are now at 63 percent.

Although the agreement itself may not cause Seychelles’ debt levels to descend further, the favourable terms of the debt swap mean that the Indian Ocean island nation will benefit in a number of ways in the long term.

The debt buyback of $30 million worth of Paris Club debt saw a rare discount of five percent being offered as a ‘haircut’ – a discount amounting to $1.5 million.

“That discount was given because our proposal included elements of sustainable development, elements which will permit Seychelles to adapt to climate change,” said Minister Adam.

The credit note for 28.5 million will be transferred to a multi-stakeholder-administered trust fund established within the Seychelles, called the Seychelles Climate Adaptation Trust (SeyCAT) where it will be paid by funds sourced by US-based NGO The Nature Conservancy (TNC).

Around $8 million of the funds will come from grants and the remaining funds will be sourced from investors interested in sustainable development projects.

The government of Seychelles will continue to repay the debt, however, a portion of the repayment will be made in the local currency of Seychelles rupees instead of in US dollars, reducing the quantity of foreign exchange which needs to exit the country’s reserves to repay its external debts.

Thus far, France, the United Kingdom, Belgium, South Africa and Italy have agreed to the debt swap, but according to Minister Adam, more countries within the Paris Club could still join in as time goes on, increasing the amount of debt available to swap.

"The door is still open," he said. "Within the coming months and even years, other donors and investors could still come forward, as well as other creditors."

Legal, strategic framework being developed for the 30 pct of Seychelles' waters now protected