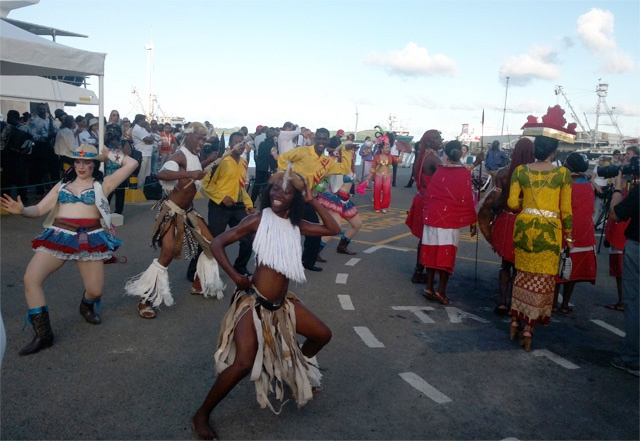 (Seychelles News Agency) - Only a few hours remain before Seychelles launches the fourth edition of its Carnaval International de Victoria.

The Seychellois population and the international delegations are already buzzing with excitement.

“Everyone is coming out, it's lovely and we all have are part to play, so we can't wait," said a member of the UK delegation

"It is really cool to be here, because we are all dancers in some way and we want to promote Italy and our football team and hopefully Italy will win the world cup," said an Italian dancer.

"We came to Seychelles for the “Fete Afrique” last year and this is our second time in Seychelles, we hope to come back next month for this year’s Fete Afrique (….)," said the Kenyan group from a Masai tribe that forms part of a cultural centre call the Pomos of Kenya.

SNA took time to get the international participants’ impression of the Seychelles carnival as they waved goodbye to those lucky enough to enjoy the sunset cruise on the calm Seychelles waters yesterday evening.

The cruise was organised mainly for international journalists coming from the likes of CNN International, French TV, BBC, Italy TV, CCTV, SABC, DSTV, MBC of the Middle East, Dubai Eye, Korean TV, Antenne Reunion, Zone Austral, MBC of Mauritius after they had been given a foretaste of what’s in store during the next three days as 8 groups gathered at the Inter Island Quay on the main island of Mahe.

Dressed in their unique costumes the members of some of the international participants showcased the vibrancy and distinct features of their homeland as they danced with the Inter island ferry ‘Cat Coco’ awaiting in the background to take the international journalists for a cruise from the Mahe jetty to northern district of Beau Vallon.

The Minister for Tourism and Culture Alain Saint Ange explained that the Seychelles Tourism Board (STB) organised the Cat Coco cruise with the main aim of having a press conference to welcome the press, a very aspect of the carnival.

The event is set to get maximum media coverage this year as a record number of 151 international journalists from nearly 84 media houses have flown to the Seychelles to bring the fourth Carnaval International de Victoria to the world.

A spectacular opening ceremony has been planned starting 6.30pm local time, for the first time to be held at “Stad Popiler” a couple of metres away from the usual location for the carnival opening around the Clock Tower in the heart of the capital of Victoria.

The Seychelles Ministry of Tourism and Culture has said the change in location is to accommodate the increasingly large crowd coming down for the opening.

In addition to the Seychellois people who more and more each year are embracing the carnival spirit the number of international delegations and journalists flocking to the Indian Ocean island have also increased.

Nearly 30 international delegations from the Nottinghill Road Show Company, South Africa’s Kwazulu Natal and Cape Town Minstrel, Brazil, South Korea to newcomers like Mozambique and Bangladesh will be showcasing their culture in this year’s carnival.

They will parade alongside some 26 local floats being cheered by the Seychellois people especially the children as well as visitors coming from different corners of the world.

The excitement itself for the Carnival will start building up around midday today as entertainment starts in the capital of Victoria leading up to the opening ceremony tonight.

Tomorrow afternoon Saturday April 26 is when the centre of the capital will be most packed as all the delegations dressed up in their beautiful and vibrant costumes will parade under the hot sun all doing their best to come out as the best float a prize which Nottinghill from the UK will surely be defending as the reigning best International float.

The manifestation will end in the evening of Sunday April 27 after the kids from schools across the country have had their first Carnival put together by Lima Calbio from Trinidad and Tobago who has been coming back for every Carnaval International de Victoria since her first participation in 2011.