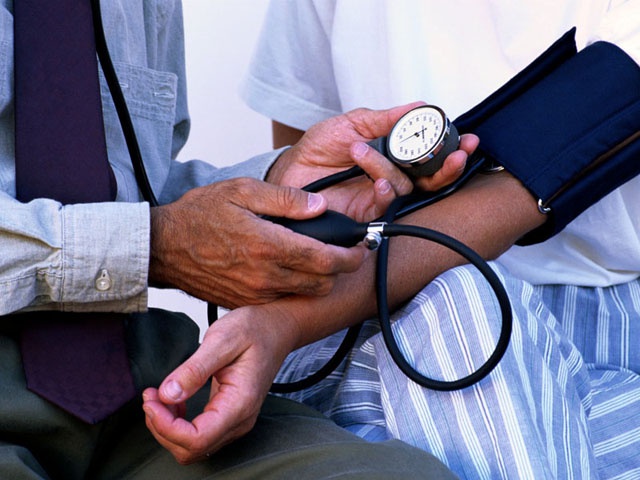 Have you had your blood pressure checked lately? Hypertension, or high blood pressure, is one of the health complications brought about by smoking, lack of physical activity, alcohol consumption or poor dietary habits. (Wikimedia/Volganet.ru) CC-BY-SA 3.0

(Seychelles News Agency) - Health authorities have called for stronger measures to be put in place to tackle diseases related to the obesity epidemic in Seychelles, including heart disease, hypertension and diabetes.

The health officials from the 115-island archipelago situated in the western Indian Ocean have also recommended that harsher legislation should be introduced, including taxation on ‘junk foods’ to encourage the islands’ population of 90,000 people to make healthier lifestyle choices.

A new national survey on non-communicable diseases (NCD) in the Seychelles, conducted between 2013 and 2014 have shown that around three quarters of the archipelago’s population was overweight and a further 11 percent were already suffering from diabetes, a chronic disease directly related to obesity.

The results of this study were released to the media at a press conference earlier this week by Public Health Commissioner Dr Jude Gedeon and a team of health experts, led by cardiovascular expert Dr Pascal Bovet.

Additional data released early this year from the World Health Organisation has shown that the Seychelles has the highest proportion of overweight and obese men and women in sub-Saharan Africa, with some around 74 percent of its adult female population and 64 percent of men classified as overweight.

The prevalence of diseases which are not infectious or transmissible from one person to another have been on the rise in many countries and the previous three national surveys have proven that the Seychelles has not been spared from NCDs.

These results are far from the global targets sets by the World Health Organisation (WHO) for NCD prevention and control which should be achieved by 2025 by its members, including the Indian Ocean archipelago of Seychelles.

Speaking to SNA in an interview, Dr Bovet said that obesity rates in Seychelles have been high as far back as 2004.

“Hypertension and blood cholesterol has improved, which is the good news, but obesity and diabetes continues to rise which is the bad news… The improvement is probably due to the reduction in the use of tobacco especially, since we have done quite a lot towards this campaign but obesity has worsened,” said Dr Bovet.

Furthermore, the study has revealed a new trend in obesity, as the male section of the population is now seeing faster increases in obesity, although this according to Bovet is “not surprising as everybody is taking on weight, including children”.

The study also further highlighted the poor lifestyle choices of the Seychellois people, including a high incidence of alcohol consumption.

Due to Seychelles’ remoteness as a small island developing state and lack of arable land, the country depends on importation for most of its consumable products, and the high cost of importation to the islands mean that often, it is mass-produced junk food, high in sugar, additives and trans fats, which are chosen over more expensive healthy foods.

Fresh fruits and vegetables, some locally-grown and others imported from foreign countries by sea and air, can be prohibitively expensive to a population for which salaries are often relatively low.

Dr Bovet and his team of researchers analysed data various risk factors that contributes to non-communicable disease such as the physical activities of the participants, their dietary habits, their physiology and symptoms of some of the NDCs such as hypertension, diabetes and obesity.

“Blood cholesterol was already high in Seychelles and it has decreased slightly over the past ten years, which is also a good surprise and probably reflects a change in dietary habits among the population,” Bovet told SNA, adding that there was soon to be a national upscale in prevention measures of non-communicable diseases.

The four behavioural risk factors related to NCD are smoking, lack of physical activity, alcohol consumption and poor dietary habits, all of which will now be under the government’s spotlight at is seeks to bring about changes in its citizens’ behaviour.

Although smoking among men has decreased since 2004 from 30.8 percent to 28.3 percent in 2014, slightly more women have been shown to be taking up the habit, with female smokers accounting for around 5.1 percent of the population, an increase of over one percent in the past ten years.

The research team has recommended that education towards good eating practices should be continued, and that stricter regulations on food importation and food and drink advertisements should be considered.

“We know more than enough to act on the risk factors of non-communicable diseases which accounts for most cardiovascular diseases and cancers in the country. So there is no need to look at complicated solutions,” said Bovet.

“We cannot afford to have all these cases in the next ten years, so we need to take action on measures that will improve the four risk factors related to behaviours.”