Small, but not insignificant – Ban Ki-moon on small island states 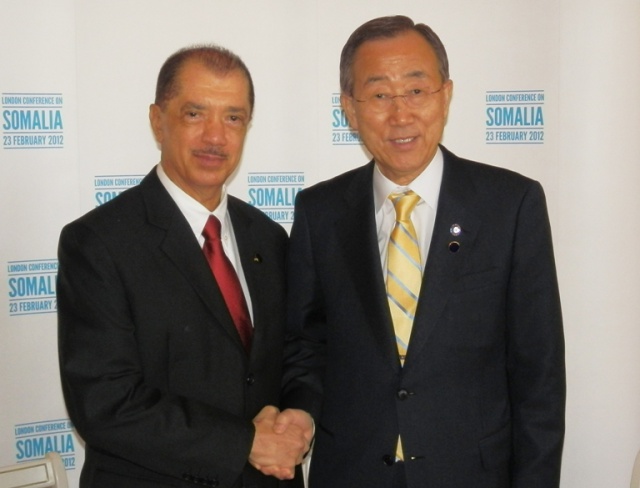 (Seychelles News Agency) - UN Secretary General Ban Ki Moon may be the head of the largest intergovernmental organization in the world often preoccupied with the great world powers in the climate change debate, but he is convinced that the entire world can learn vital lessons on tackling climate change from some of the smallest states.

In an opinion piece entitled “What we can all learn from Small Islands”, published recently on professional social media platform LinkedIn as well as other social media, Ban says there is more to Small Island Developing States (SIDS) than sand, sea and fun in the sun. Firstly, he says, their large ocean territories make them the primary custodians of large amounts of the earth’s marine biodiversity, and secondly, SIDS suffer the greatest risk to their territories from natural disasters and losses brought about by climate change, even though they are not the primary contributors to this man-made phenomenon.

“Many of the challenges they face confront us all, and warrant our collective action,” writes Ban, adding that SIDS were “extremely vulnerable” to the impacts of climate change – including natural disasters such as hurricanes, typhoons and cyclones as well as the dangers of rising sea levels.

“Yet the people there have not been defeated by fear,” he believes. “Instead, they have stepped up and shown extraordinary leadership and resilience. Despite having contributed little to the problem, they are pioneering solutions for a more sustainable future. They have called upon their ingenuity, innovation and use of traditional knowledge to combat climate change and help protect not only themselves but the world’s – our – oceans and biodiversity.”

Seychelles, an Indian Ocean island nation of 90,000 people, is one of the SIDS at the forefront of the fight against climate change and has demonstrated that even small countries with limited resources can implement ground-breaking anti-climate change projects and policies which, if proven successful, could be adopted on a larger scale in other countries, such as renewable energy projects and Global Environment Facility (GEF)-funded biodiversity and coastal conservation projects.

Ambassador Jumeau has on numerous occasions led the Alliance of Small Island States (AOSIS) in demands for leaders of developed nations to back a legally binding agreement to drastically cut their greenhouse gas emissions, and Seychelles’ role in calling for accountability has gained widespread recognition at negotiation tables.

The Seychelles’ Minister of Environment and Energy, Dr. Rolph Payet, is another respected voice in the fight to pull the world back from the brink of climate-related disaster. Payet is an international policy expert, researcher and speaker on environment, climate and island issues and, as a lead author with the Intergovernmental Panel on Climate Change (IPCC), which was jointly awarded the 2007 Nobel Peace Prize for its work on the Third and Fourth Assessment Reports.

Seychelles President James Michel declared a national theme for 2014 of “International Year of Small Island Developing States: Seychelles – A Determined Island Nation”, to give recognition to the vocal and passionate role Seychelles plays as a small island state. The United Nations also announced 2014 as the International Year of Small Island Developing States. SIDS will also convene in Samoa in September this year for a UN conference to discuss the particular vulnerabilities of small islands.

The UN Secretary General says that island nations are not the only ones who are experiencing the effects of climate change, which is why he has made calls for action a priority during his term in office.  Ban will be convening a Climate Summit in New York on 23 September this year to once again put pressure on developed nations to sign a legal agreement on climate change next year.

“Let’s look to the people of this remarkable group of nations for inspiration,” Ban adds. “Let’s follow their lead and take decisive action to set our world on a sustainable path. We may not all live on a small island – but we do all share a planet and the responsibility to protect it.”