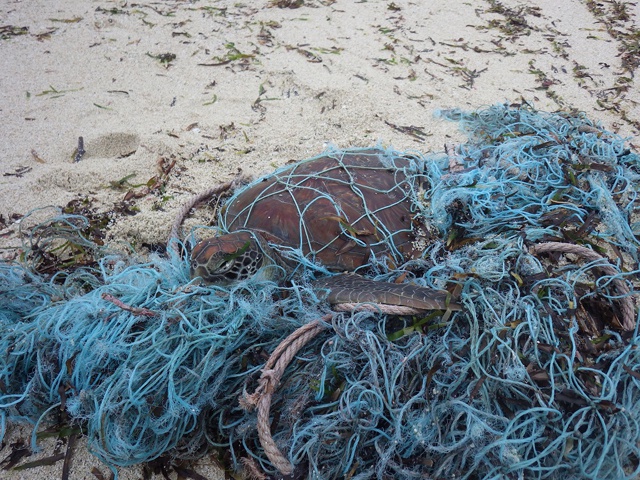 A cautionary tale - the consequences of fishing equipment lost or discarded at sea are made apparent by the sight of a young green turtle completely ensnared in a ghost net (Sam Balderson, Island Conservation Society Seychelles)

The remote island atoll of Alphonse, situated in the outer islands of the Seychelles archipelago is a paradise for birds and nesting sea turtles.

However, for one young green turtle, Alphonse seemed to be the setting for its impending death as it washed ashore at the culmination of a protracted struggle against the fishing net which had entrapped all its limbs, rendering it completely helpless against the elements.

These are ‘ghost nets’ - discarded or lost at sea by fishermen, the nets float at sea, sometimes travelling huge distances and entrapping countless marine species. They are the danger lurking below the surface of the sea, a scourge that is both a threat to marine life and the livelihoods of those who depend on the bounties of the sea.

Luckily in this case, the juvenile turtle was spotted just in time by a conservation ranger who happened to be patrolling the beach on Wednesday last week.

Chris Nanty, who works at the Island Conservation Society (ICS) Seychelles’ base on Alphonse, ended up being the turtle’s saving grace.

Speaking to SNA in an email interview, Sam Balderson, the ICS Conservation Officer stationed on Alphonse, said Nanty was on his normal morning beach patrol, which involves looking for tracks of nesting turtles, counting seabirds and wading birds and generally looking for anything out of the ordinary.

“Chris was coming to the end of his patrol that morning when he saw a large pile of net washed up on the beach at the high tide line,” he said. “When he investigated the net he found a juvenile green turtle entangled in it. The turtle was completely stuck with netting wrapped around all four flippers and its head.”

Realising he would not be able to remove the net easily, he ran back to the ICS conservation centre to grab a pair of scissors and alerted Balderson to the situation, who came along to offer a helping hand.

“The turtle was very weak, but once it had been cut free from the netting and taken down to the water’s edge it seemed to realise it was free and gently swam away when we placed it back in the ocean,” Balderson told SNA. “Luckily the netting had not caused any serious cuts to the turtle’s flippers, but it had caused some deep abrasions in the shell as the turtle had struggled to free itself.”

The tip of the iceberg

Relief was the general sentiment of the day - for Nanty and Balderson but probably for the turtle as well, which was probably only a few hours away from becoming easy pickings for the opportunistic beach crabs.

However, the ICS team’s jubilation at having saved the life of an endangered creature was tempered with the knowledge that this little turtle was just one of many potential ghost net victims - and conservation rangers will not be able to save them all.

Out of the turtle nesting season, beach patrols are not always done every day, and patrols on the neighbouring atoll of St. François are done only once a month.

Struggling with limited resources and the challenges of being stationed on a remote island, the small team also cleans the beaches once a week to try and reduce the massive amounts of sea trash that wash up on the beaches from neighbouring countries and fishing vessels in the region.

All too common a tale

Sadly, this particular little turtle’s story is one which is repeated frequently, often with much less of a happy ending.

According to Balderson, he regularly hears reports of animals found trapped in fishing gear and other marine debris, found either by ICS staff members and the guides who work for the fly-fishing lodge on the atoll, as well as his colleagues who are stationed on some of the other outer islands.

“We have seen turtles caught in lost fish aggregating devices (FADs), [which are] another form of ghost net, including a dead Olive Ridley turtle, which are rare in the Seychelles, found a couple of years ago,” he said, adding that the problem did not only affect turtles but also seabirds, particularly red-footed boobies, getting fishing lines caught around their legs and dying.

Balderson says it is impossible to tell if the latest rescue would suffer any lasting effects from the trauma of getting stuck.

“Whenever you release an animal like that you know that there is a chance that it might not survive,” he said. “Turtles are pretty tough though, we have seen them here with missing flippers, [which can] also potentially be amputated by fishing lines or nets, and they continue to survive.”

“We had one female green turtle that kept coming on to the beach to try and lay her eggs, but she had lost a back flipper and could not dig the nest properly... that was quite sad to see.”

On the front lines of a global sea trash crisis

According to Balderson, discarded ghost nets, which are made of non-biodegradable materials, continue ‘fishing’ as they drift through the ocean on the currents for years or even decades, entangling and killing a variety of marine life, including turtles, sharks, rays, seabirds, dugongs, whales and dolphins.

“As with all marine debris it is very difficult to tell exactly where the things are coming from. It is possible to look at the size and construction (the type of material and knots used) to get a good idea of what type of fishing the net was being used for and possibly the country of origin,” Balderson told SNA.

“Obviously larger vessels are putting out bigger nets and longer lines so if these get lost they cause a bigger problem,” he said, adding that the problem was not a problem specific only Seychelles, but affecting the entire world.

“There needs to be consensus between governments and regional fisheries management organisations to tackle the most damaging forms of fishing,” he said. “If the Seychelles imposes restrictions on certain types of net fishing, ghost nets from outside the Seychelles EEZ can still drift into the area.”

Danger to boats and livelihoods

Not just a problem affecting endangered marine life, the ghost net dilemma is one that poses a significant hazard to boats, as they can become tangled in propellers. Ghost nets, particularly large commercial ones, can affect fish stocks as well, resulting in an economic loss for fishermen.

“It is not easy to prevent this from happening, proper marking of nets so that they can be traced back to the fishermen that lost them; proper disposal facilities for old fishing nets so that they are less likely to be discarded are good initiatives,” Balderson told SNA, adding that some countries are even giving financial incentives to fishermen to encourage them to discard their old nets safely.

One possible solution would be for manufacturers to use more biodegradable materials in fishing gear, reducing the long-term impact of lost gear on the environment.

“I think in the majority of cases fishermen do not want to lose their fishing gear, after all it represents a significant financial loss to them, particularly for small scale artisanal fishermen,” said Balderson.

“Maybe training is needed, to get fishermen fishing in ways that reduce gear loss, and technology should be used to help this, tracking devices on gear, mapping of the sea floor to increase knowledge of areas where gear is likely to get lost, as well as seasonal closures of areas where non-target species are more likely to get caught, such as breeding grounds and migratory routes.”

ICS Seychelles is continuing its efforts to tackle the issue of lost and discarded Fish Aggregation Devices (FADs), which seriously affects the outer islands of the Seychelles archipelago.

“It is hoped that the data collected through this work can help inform decision makers on the measures that need to be taken to address this problem,” concluded Balderson.