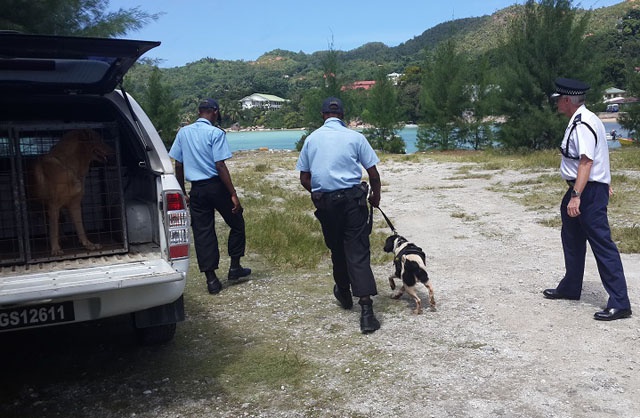 The Seychelles police force has decentralized its dog unit by establishing a first dog unit on Praslin as it aims to increase the trained canines' involvement in crime detection.(Seychelles News Agency)

(Seychelles News Agency) - Dogs are among the most popular pets in Seychelles with many of the island nation’s population of around 90,000 people owning a particular breed, which are kept as guard dogs, member of the family in some cases or simply as a ‘faithful companion’.

While this has been the trend for many years, dogs are slowly taking on a much bigger role as the island nation’s police force aims to boost its dog unit.

Snoopy, a white and black English cocker spaniel and Argo, an imposing brown German shepherd cross are two of the canine recruits recently dispatched to the second most populated of Praslin as part of the police’s effort to decentralize its dog unit instead of focusing solely on the main island of Mahé.

When released by his handler, Snoopy, the otherwise friendly canine can search for concealed illegal drugs in places where his human companions cannot while his backup officer is fiercely protective of his human handler and canine friend.

The two are among nine other canine officers often seen roaming the streets in Seychelles accompanied by their human handlers. Mainly recruited from the United Kingdom they form part of the special dog unit of the police force, which is based at Petit Paris on the eastern coast of the Seychelles main populated island of Mahé.

While the presence of police dogs in Seychelles go way back to the time the Indian Ocean archipelago was still a British colony, in recent years, although the trained canines are often seen at the port of entries on the main island of Mahé, they have not been as active in wider crime detection efforts.

It is in a bid to change this scenario that the dog unit has extended its services by posting its officers on the island of Praslin where the dogs and their handlers also commute regularly to the third most populated island of La Digue, which lies only 15 minutes away by boat.

One of the first success of the new dog unit on Praslin was the tracking down of the culprits of a coco-de-mer theft incident which has become a common occurrence on the island.

Poaching of the iconic Coco-de-Mer, the largest nut in the world which grows naturally in the UNESCO Heritage site of Vallee de Mai has been described as alarming in recent years.

“It is fairly new, but as the dogs and their handlers get more confidence in each other we hope this is a unit that will grow as already it is a plus to law enforcement in the country…,” Superintendent Shaun Jackline, who is currently responsible for the dog unit in the Seychelles Police, told SNA in an interview.

The right dog for the job

While dogs are often labeled 'man’s best friend' it takes a special kind of breed to be groomed into a police officer’s right hand.

German shepherd remains the most sought after dogs for the job although other dogs that are friendly, well-kept, not afraid of crowds and aged between ten months to three years can also qualify for the job.

With preferably a background in police work, their human handlers are also carefully picked with animal lovers and caring characters topping the list of requirements.

After recruitment the dogs and their handlers which are paired according to their personality undergo vigorous training, which also include socializing with each other and basic obedience training.

“Only when we are sure that they get along, do we start the more technical training but even then their progress are monitored and there is also the theory side of the training which the handlers goes through such as grooming, etc..,” said Jackline while emphasizing that this is a weekly training programme that ensures they both know how to handle real life situations.

Being part of the police force means the dogs are involved daily attending to crime scenes and patrols, and recently have also been involved in road blocks where the dogs are active in searching vehicles for any illicit items.

“….Often in house breaking incidence, for example, the area is cordoned off and the dogs are released… in such cases, the dogs have successfully retrieved stolen properties… As for the actual apprehension of suspects from a crime scene, the dog is more of an aid because of the close proximity of houses and roads and they are used extensively to track suspects..."

More than a bone’s worth

While other countries have been quick to take advantage of the domesticated pet, the Indian Ocean Island is only using dogs to help in searches, for general purposes such as patrolling the streets and explosive detection. With training, dogs have also been used in other functions such as search and rescue operations as well as other more risky roles.

Having worked as a dog handler and trainer in South Africa, Superintendent Jackline says dogs, often the first to encounter dangers in the line of duty, are a worthy addition to the police force.

“It is equivalent to the work done by ten police man…,” says Jackline. “Having a dog you can have a lot more productivity when it comes to searching a large area for example,…and they give themselves 100 percent to what they are doing…”

Although quite small in numbers when compared to their over 800 strong human counterparts in the police force the dogs are treated as equal and are even been allocated time for a good rest and feeding.

“These dogs are regarded as a member of the force. They have their own files which include personal details, medical history, training they have undergone…just like any other policeman,” says Jackline highlighting though that most police dogs retire after eight years in service.

With good night vision, a strong sense of hearing and smell, the presence of a dog can be intimidating to criminals but for a policeman it is an extra helping paw.

“We want to upgrade the unit, train more people to work with dogs and use the dogs as extensively as possible, in different functions and why not spread them out in police stations across the country…,” says Jackline.

It is envisaged that the presence of more policemen and possibly extra paws on the streets in Seychelles will be a key factor in detecting crimes before they occur.

In an article published in the daily newspaper Seychelles nation, last month, the Seychelles police reported that ‘the detection rate of crimes had significantly increased, “from 8 percent prior to June to 60 percent in June,” this year.