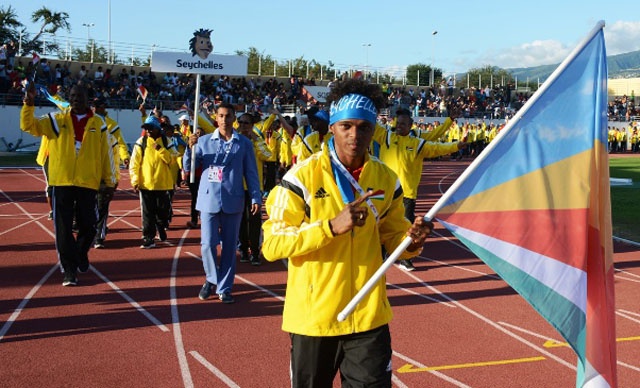 (Seychelles News Agency) - The 9th Indian Ocean Island Games (IOIG) being held in the French overseas department of Reunion enters its third day today, with Seychelles having two bronze medals to show so far after the first day of competitions on Sunday.

An athlete from Madagascar won the event’s gold medal ahead of a Mauritian.

The host nation’s team won the gold medal while Mauritius earned the silver for finishing the race in second position.

The 9th IOIG which Reunion is hosting for a third time having hosted the first games in 1979 and also in 1998 was officially launched on Saturday.

This was during a ceremony held in Reunion’s ‘Stade Olympique de Saint-Paul’ attended by a large number of people from Reunion island itself as well as from the 6 other participating Indian Ocean islands of Mauritius, Seychelles, Comoros, Madagascar, Mayotte and the Maldives.

The ceremony saw over two thousand athletes from the Indian Ocean region parade the stadium with their respective island’s flag flying high.

Boxer Andrique Allissop, also Seychelles sportsman of the year for 2014 was the one given the owner to carry the Seychelles flag leading Team Seychelles' delegation of 250 athletes.

When launching the regional sporting manifestation which is held every four years, the French Minister for Cities, Youth and Sports, Patrick Kanner said this is an opportunity to measure the progress of the games which has become a major regional sporting event.

“I am convinced that this edition [9th IOIG] will be a success as the sportsmen will give their best and will go out to perform and achieve good results while respecting all the other participants and all stakeholders involved in this competitions,” said Kanner.

The opening ceremony also saw performances by artists from the region and, of course, the lighting of the games' cauldron, which has been designed to mirror Reunion’s piton de la Fournaise, one of the world’s highly active Volcano.

While athletes from Reunion, Mauritius, Mayotte, Seychelles, Maldives and Madagascar are now intensely battling for the most medals, the Comoros has officially announced that its athletes will not be taking part in the competitions.

This is to protest against the fact that Mayotte had paraded the official opening ceremony under the French flag and singing the French national anthem ‘La Marseillaise’.

This is viewed as a violation of the games Charter and regulations.

According to the Charter, Mayotte although a French overseas department is supposed to carry the Indian Ocean Island Games flag.

The Indian Ocean Island Games will run until August 9 and will see the region's athletes battle for the best results in 14 sporting disciplines.

For 'Team Seychelles' the goal is to bring home some gold and try to repeat their last success achieved on home territory when they won 123 medals - including an unbeaten 57 gold medals - in 2011.

To motivate the athletes to achieve good results, the Seychelles sports minister Vincent Meriton announced ahead of the games that there will be an increase in bonuses for medalists.

A small but determined number of Seychellois have decided to make the trip to Réunion to support their team and the country in general but the majority of the 115-island archipelago’s 90,000 population are following the games and cheering for their countrymen and women by watching the national television broadcaster, Seychelles Broadcasting Corporation (SBC).

Some matches are also being broadcast live by SBC.