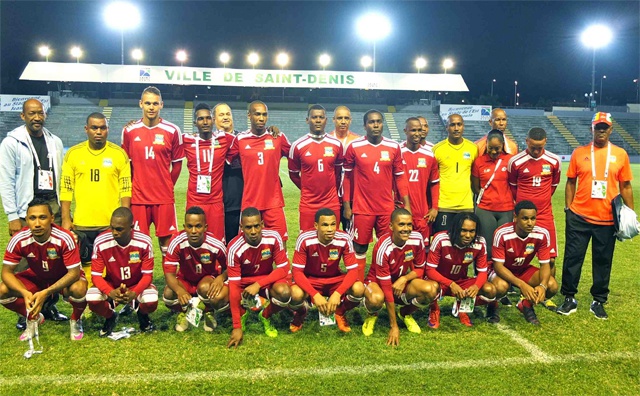 (Seychelles News Agency) - Another Indian Ocean island nation will be taking home the gold medal in football at the quadrennial regional sports manifestation being held in Reunion, now that Seychelles is no longer in the race.

The Indian Ocean archipelago’s national football team failed to reach the semifinals at this year’s Indian Ocean Island Games (IOIG) after losing 0-1 against Mayotte in its last group match on Tuesday.

Seychelles, which had been drawn alongside Mayotte, Maldives and Madagascar in Pool A had already lost 1-2 against the Maldives.

Seychelles' only four points in the pool was achieved after winning by walkover against Madagascar last Friday after the Madagascan team had failed to land in Reunion island in time due to visa issues.

Football was one of the collective sporting events that made Seychelles proud in the last games held on home grounds in 2011 when it defeated Mauritius in the finals at Stad Linite, the main stadium, on the outskirts of the Seychelles capital of Victoria.

Nevertheless, there is still hope for the Seychelles women’s football team, which has qualified for the semifinals where they will battle against Madagascar for a chance to reach the finals.

This is the first time women’s football has been introduced at the IOIG.

The other collective sports disciplines that have the hard task of holding on to the gold medal won at the last games in 2011 are the Seychelles men’s volleyball and basketball teams as well as the women’s volleyball team.

Things seemed to have got off to a good start for both the men and women’s volleyball teams who have made impressive 3-0 wins against Madagascar and Mayotte respectively in their first group matches.

On the ladies side, however, the semifinals have been marred by some controversies after Reunion's volleyball league announced yesterday that it will not be organising any more matches for the women's side.

This came after one of Reunion's female players, Myriam Kloster, was disqualified following demands made by the Seychelles and Mauritius sides, claiming she did not meet the games' regulations.

In basketball, the men’s team will be going all-out to try and earn a spot in the finals. The team has had some tough group matches against Madagascar and Mayotte.

With five days remaining before the 9th IOIG comes to an end, Seychelles standing on the medal table at the end of third day of competitions on Tuesday was at 1 gold, 8 silver and 8 bronze medals.

After winning the first two bronze on Sunday and an additional four bronze and one gold medal on Monday the island nation managed to bring in another two bronze medals in athletics by Silly Gaylord in the 3,000 metres steeplechase race and the men’s Badminton team.

Neddy Marie who came out second in the 400-metre race as well as Lionel Savy and Nantenaina Finesse in judo who both took second place in the finals of their 100 kilograms and 90 kilograms category respectively contributed to the tally of seven silver medals won yesterday.

Weightlifter Rick Confiance also managed a second overall finish in his 62 kilograms category as the weightlifting events got underway winning three silver medals for 105 kilograms in snatch, 130 kilograms in clean and jerk and Olympic total of 235 kilograms.

The Seychellois women badminton players of Alisen Camille, Chlorie Cadeau, Cynthia Course, Juliette Ah-Wan and Shirley Etienne also made a 4-1 win in the teams’ finals against the Maldives to win themselves the silver medal.

Seychelles only gold medal so far was won on Monday by high jump specialist Lissa Labiche.

Speaking on national television this afternoon the island nation's sports minister Vincent Meriton said he was not satisfied with the number of medals won so far while adding that he is still hopeful that Team Seychelles will be able to improve on its performance.

"Yesterday we lost three gold medals in weightlifting, the day before yesterday we lost one gold medal in athletics and this is affecting our forecast and we should be able to push our athletes to succeed in spite of certain difficulties encountered at the beginning of the games. We need to persevere...," said Meriton in an interview with the Seychelles Broadcasting Television, SBC's sports journalist Pierrette Confiance.

"I will be leaving for Reunion tonight... and will be present for the finals and I am hoping that Seychelles will reach the finals in more events to defend our position because as we said in the beginning the other countries, mainly Mauritius, Madagascar and Reunion have come all out to defeat Seychelles. So our athletes are facing strong challenges but they are in high morale and we need to keep fighting till the end."

On home territory in 2011, Seychelles won 123 medals in the Indian Ocean Island Games including an unbeaten 57 gold medals.