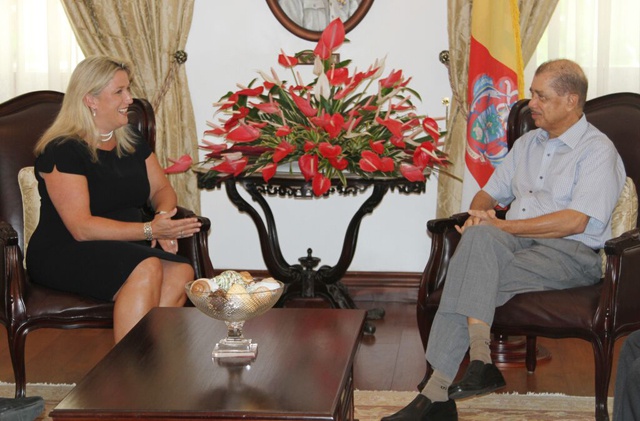 (Seychelles News Agency) - The British High Commissioner to Seychelles, Lindsay Skoll, has ended her tenure to the 115-island Indian Ocean archipelago by paying a farewell visit to the country’s president, James Michel, on Tuesday.

According to a press statement issued by the Office of the President on Tuesday, President Michel thanked the High Commissioner for her dedication to developing “excellent relations” between Great Britain and the Seychelles, which officially gained its independence from being a British colony in 1976.

“I would like thank you for the work you have accomplished during your mandate to further deepen the friendship between the United Kingdom and Seychelles, with fruitful partnerships and positive outcomes,” President Michel was quoted in the statement.

“The UK remains one of Seychelles’ valued developmental partners, bilaterally and through international bodies like the European Union and the Commonwealth. Our two countries have benefited from the friendship and history we share to collaborate at ever greater levels.”

During the meeting, High Commissioner Skoll thanked Michel for the support she had received during her tenure and described the relations between the two countries as “a real partnership” in which “transformational work” had taken place.

A new British High Commissioner is expected to be appointed to the Seychelles by mid-September.

At a press conference for local media held at the British High Commission in the Seychelles capital of Victoria on Monday, the outgoing High Commissioner described her three-year tenure as “eventful”, but also said her experience of being in the diplomatic post had been “incredibly interesting, I cannot believe how fast the time has flown, it’s been endlessly fascinating, quite challenging at times but overall extremely rewarding.”

According to local newspaper the Seychelles Nation, High Commissioner Skoll pointed to bilateral cooperation in the fields of anti-piracy, Seychelles joining the International Paralympic Committee (IPC) and prison reforms as the areas in which she felt the most had been achieved.

“I arrived in 2012 at the height of the piracy crisis. And that’s been a really fascinating piece of work, mostly with all these warships, working with the international community through the EU (European Union), Nato (North Atlantic Treaty Organisation) and combined maritime forces, to make sure that we could rid the Seychelles EEZ (exclusive economic zone) of any pirate. And also to make the whole horn of Africa and the high risks zone safer for all commercial and fishing traffic as well,” she said.

Piracy around the Horn of Africa, which affected container ships, fishing vessels and cruise ships traversing the strategically important location, has been significantly brought under control since its peak in 2009, with only two failed attempts in 2014 and no activity recorded thus far in 2015.

The lead-up to Skoll’s departure was mired in controversy in June after the British High Commissioner officiated at a first same-sex union between two men, one a British national and the other a British-Seychellois citizen, the first of its kind to take place in the Seychelles.

Although same-sex marriages are not currently recognised by the law in the Seychelles, under British law, the British High Commission may offer the service to British nationals upon request.