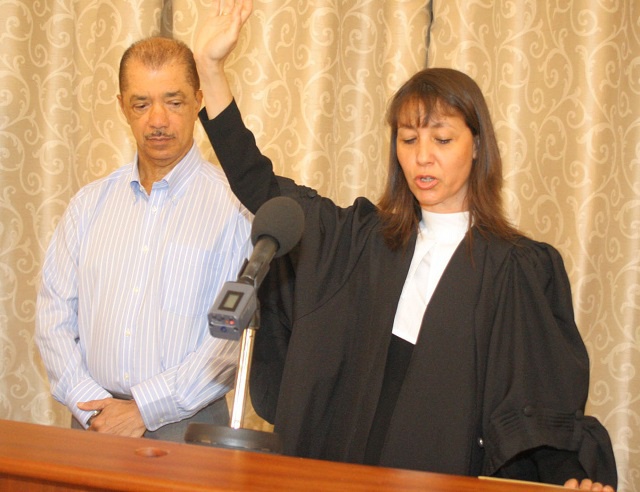 File Photo: Justice Mathilda Towmey swearing in as a non-resident Judge of the Seychelles Court of Appeal in April 2011. (Office of the President)

(Seychelles News Agency) - Seychellois Judge Mathilda Twomey has been appointed the new Chief Justice of the Seychelles Supreme Court becoming the first Seychellois woman to be appointed to the post.

This comes four years after she became the first Seychellois female Judge in April 2011, following her appointment as a non-resident Judge of the Seychelles Court of Appeal.

In a press statement issued this afternoon, State House said her appointment by the Seychelles President James Michel followed “the unanimous recommendation of the Constitutional Appointments Authority.”

Michel has described Justice Twomey as a “highly-qualified legal practitioner” adding that her wealth of experience and knowledge will be of “vast benefit to the legal and judicial system in our country and the reforms that are needed.”

“Commenting on the appointment, President Michel noted that the empowerment of Seychellois – especially women – has always been and will continue to be at the core of his philosophy and policies for the advancement and progress of the country,” reads the State House statement.

Starting her career in the legal profession in Seychelles in 1987, Twomey first served as a barrister in the Ocean Gate Law Centre as pupil to Justice Francis MacGregor [current President of the Seychelles Court of Appeal] and has also worked in the Attorney General’s Chambers, and as an attorney-at-law in private chambers.

She also holds a Master’s Degree in Public Law and has recently completed her PhD research at the National University of Ireland, Galway.

Justice Twomey has been residing in Ireland with her family since 1995, where she currently lectures at the National University of Ireland in Galway.

When she is sworn in on August 18, Justice Twomey will become the third Seychellois national to serve as Chief Justice.

Her appointment comes almost a year after the former Chief Justice of the Seychelles Supreme Court, Ugandan national Frederick Egonda-Ntende came to the end of his five-year contract.

Since then, Justice Durai Karunakaran has been the acting Chief Justice.