Will the fishing industry cough up for FAD cleanups? Seychelles NGO heads to regional Tuna Commission 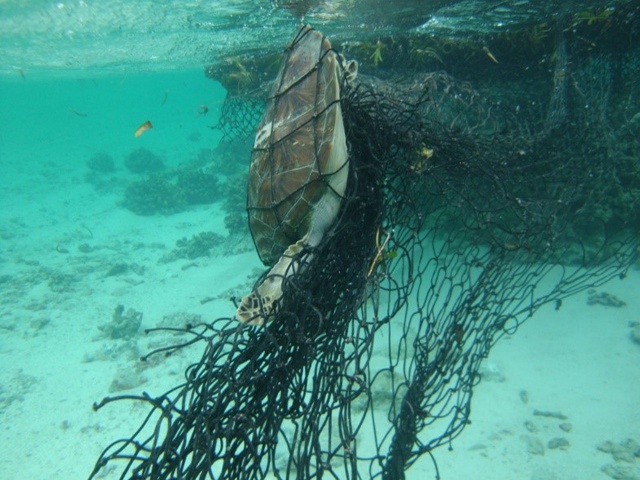 A tragic casualty of the mounting problem of lost FADs from the tuna fishing industry -  a green turtle floats lifelessly in the tangled netting (Tony Jupiter, ICS Seychelles)

(Seychelles News Agency) - After facing a mounting battle to fight the growing impacts of lost Fish Aggregation Devices, the Island Conservation Society (ICS) of Seychelles is heading to the Indian Ocean Tuna Commission (IOTC) to seek solutions and funding for the continuous clean-up operations being carried out in the outer islands of the Seychelles archipelago.

ICS’ small team works on the remote atoll of Alphonse, situated 400 kilometres southwest of the main island of Mahé, to protect and conserve the coral island atoll.

Part of this job has now become the arduous task of removing and disposing of discarded or lost FADs from the commercial fishing industry which wash up around the delicate coral reefs of the atoll and threaten marine life in its surrounds.

Fish Aggregating Devices (FADs) are free-floating platforms equipped with a GPS, used by the tuna purse seine industry to attract large concentrations of fish. They are commonly made up of a 2x2 metre wide bamboo raft covered with shade material and fishing nets or ropes hanging down from the corners to a depth of 20 to 50 metres.

Between 7-11 September, ICS will be sending a delegate to the IOTC Working Party on Ecosystems and Bycatch to highlight the cleanup costs and the environmental dangers that these devices impose with representatives of the tuna fishing industry and fisheries managers.

In an email interview with ICS’s Conservation Officer on Alphonse, Sam Balderson told SNA that ICS started a project this year with funding from international NGO Greenpeace to more accurately document the impact of FADs on the Seychelles islands.

In April, ICS teams conducted surveys around the St. Francois and Farquhar atolls, finding a total of 96 FADs stuck on these atolls’ coral reefs and beaches, and a database of FAD ‘beaching’ incidents recorded 216 incidents in the last four years.

“Early analysis of this data set shows that 76% of the FADs found have been deployed and lost by Spanish and Seychelles-flagged vessels, all of which are owned by Spanish companies,” said Balderson.

“When FADs become caught on reefs… the nets become more and more entangled and drag across the coral,” explained. “This causes significant damage to corals particularly branching species, which are more easily broken.”

“As the nets unravel and spread out across the reef they present an increasing threat to marine life, especially sea turtles, which can become caught in the net and drown. FADs washed up on beaches also present a significant challenge to nesting sea turtles.”

The ICS Alphonse team recently assisted in the rescue of a juvenile turtle which became trapped in a floating “ghost net” which had washed ashore.

According to Balderson, estimates from a study on the French tuna purse-seine industry published in May put the rate of FAD loss from the purse seine fishing industry in the Indian Ocean as high as 9.9 percent, possibly as many as 1,000 to 1,500 FADs per year.

ICS hopes that the information it has collected will help decision makers in the fisheries management organisations to implement stricter regulations to prevent FAD loss.

“There is also a need for funds to help clean up what is already a significant problem in the Outer islands,” Balderson told SNA.

Based on their work, ICS has come up with recommendations for more environmentally-friendly FAD design including replacing synthetic materials commonly used in FAD construction such as netting with biodegradable materials such as sisal ropes and palm leaves.

Balderson is also keen to work with the fishing industry to get to the bottom of why the FADs are getting lost.

“60 percent of the FADs that we have found still have a satellite buoy attached. We can normally determine the vessel the FAD came from by looking at the markings painted on the buoy,” he said. “What I would like to do is work with the fishing companies to determine exactly where that particular FAD was deployed. This may tell us more about the reasons why FADs are becoming lost.”

As for the cost of the cleanups, Balderson firmly believes that the majority of this should be borne by the fishing industry, but a final figure is still being worked on.

“I believe the fishing industry should pay as they are benefitting from the use of these devices, and they continue to lose them every year. If this was taking place in the terrestrial environment, then I feel certain that the polluter would be forced to clean up their mess.”

“It is very difficult to put a figure on the cost of the cleanup right now. I have also been asked this by a fishing company representative and will work on a plan,” he said. “Different islands have different facilities currently. I would estimate on Alphonse we would need $15-20,000 per year.”

However, Balderson doesn’t yet know how the NGO's requests for assistance will be received at the IOTC conference, or even how long it would take for a positive impact to be seen if their concerns are taken on board.

“This is the first time that ICS will be attending an IOTC conference so I do not know whether they will listen to us,” he told SNA. “Our communication with the Seychelles Fishing Authority has so far been positive, but the current timescale of changes to FAD management policies will mean that we will continue to see FADs on the reefs and beaches of the outer islands for many years.”