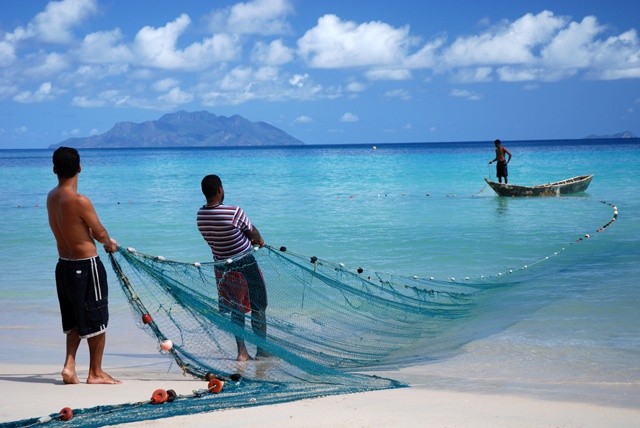 Seychellois fishermen bringing in their catch at Beau Vallon bay, Mahe island. Seychelles has highlighted the importance of goal 14 of the Post 2015 Agenda, which sets out to conserve and sustainably use the oceans, seas and marine resources. (Gerard Larose, STB)

(Seychelles News Agency) - Seychelles has supported the adoption of a new set of sustainable development goals and associated targets, which world leaders have pledged to achieve by 2030.

The Seychelles Minister for Foreign Affairs and Transport, Joel Morgan, represented President James Michel at the United Nations Summit for the adoption of the Post-2015 Development Agenda, which was attended by the UN Secretary General Ban Ki-Moon and the head of the Roman Catholic community worldwide, Pope Francis.

When he addressed the summit on Saturday, Morgan called for greater emphasis on the fight against climate change, poverty, education - including early childhood development and higher education - as well as gender equality.

He noted that these were the tools needed to achieve sustainable development and strengthen international support for SIDS.

SDGs focussing on ending poverty, ensuring prosperity for all and tackling climate change

The new ambitious UN development agenda that sets priorities for trillions of dollars in spending, comprises of 17 Sustainable Development Goals (SDGs) and 169 targets aimed at ending extreme poverty, ensuring prosperity for all and tackling climate change over the next 15 years.

In his address Morgan noted that although there had been many changes at the global, regional and national levels during the past 15 years, there were still huge disparities across and within countries.

“Seychelles takes pride in having achieved most of the Millennium Development Goals, and some were achieved even before the process was launched," said Morgan in his address.

"For example, in education and health, Seychelles had already been having near 100% enrolment of both girls and boys in primary schools. Women giving birth were assured of the best possible care and the attention of trained personnel. Child mortality was already low compared to many other countries with similar GDP. Environmental protection was already a flagship cause for Seychelles."

“Despite these achievements, my country continues to inspire greater impetus to ensure that the few unaccomplished challenges of the MDGs are fully met.”

Stakeholders in Seychelles met at the end of last month to finalise the island nation’s MDG report for 2015.

Goal 14 is of utmost importance for SIDS

Commenting on the SDGs, the Seychelles foreign affairs minister said that the there is a need for them to be widely understood by everyone after which “politicians will take them seriously and governments will finance them properly…”

For Seychelles and other Small Island Developing States, (SIDS), Morgan highlighted the importance of goal 14, which sets out to conserve and sustainably use the oceans, seas and marine resources.

"Seychelles is calling for enhancing the capacity of developing nations to sustainably harness the potential of their oceanic spaces."

The Seychelles, an archipelago of 115 islands, has a total land area of 455 km² spread over an Exclusive Economic Zone of 1.3 million square km, which means over 99 percent of its territory is oceanic space.

The island nation’s oceanic resources are considered vital for the development of its fisheries and tourism industries as well as in supporting trade when it comes to international and domestic shipping.

The blue economy is a concept which Seychelles has been actively promoting locally and on the international scene, including at the Rio Summit on sustainable development in 2012, during the 1st blue economy summit held in Abu Dhabi in January 2014, at the African Union and even at the SIDS conference in Samoa, in September last year.

“Seychelles is planning to host a 2nd Blue Economy Summit in January 2016, with the support of the UAE, during the Abu Dhabi Sustainability Week. The Summit is perfectly timed to build upon the outcome of this Summit on the adoption of the post-2015 development agenda and UNFCC COP21 and to conclude with a declaration that would support the implementation of the Blue Economy concept, with an enrichment of relevant national and international initiatives for concrete deliverables,” said Morgan in his address at the UN.

“Seychelles will continue to reaffirm the importance of the Blue Economy as part of efforts to develop a “Green Economy” to better harness our natural resources for sustainable development for combating climate change, for growth and food security.”

General debate of the 70th Session of the UNGA

The United Nations Summit for the adoption of the Post-2015 Development Agenda has preceded the general debate of the 70th Session of the United Nations General Assembly (UNGA), which will take place from September 28 to October 6, 2015.

The Seychelles President James Michel will also be addressing the 70th Session of the UNGA.

While in New York, President Michel is also expected to meet with the UN Secretary-General Ban Ki-Moon and other counterparts to share insights and perspectives on shared bilateral and global interests.

The Seychellois Head of State will also participate in the 2015 Clinton Global Initiative at the invitation of the former US President Bill Clinton and the Clinton Foundation. Michel will be on a panel addressing the issue of sustainable oceans in a special session on the sidelines of the United Nations General Assembly’s General Debate.

“President Michel has been invited to give his perspective as the leader of an island country that is spearheading the development of a Blue Economy as an innovative way for SIDS to take full ownership of their large ocean territories to develop their islands through the sustainable use of their marine resources while practicing proactive conservation policies for the oceans and seas that surround them., which is expected to bring together global leaders from all sectors of society to develop innovative solutions to the world’s most pressing challenges,” State House said in a press statement issued on Friday.

This year, the Clinton Global Initiative which is held annually, is expected to see the launching of the 'Blue Guardians Initiative', which is being developed into a global fund-raising development programme for small island developing states.