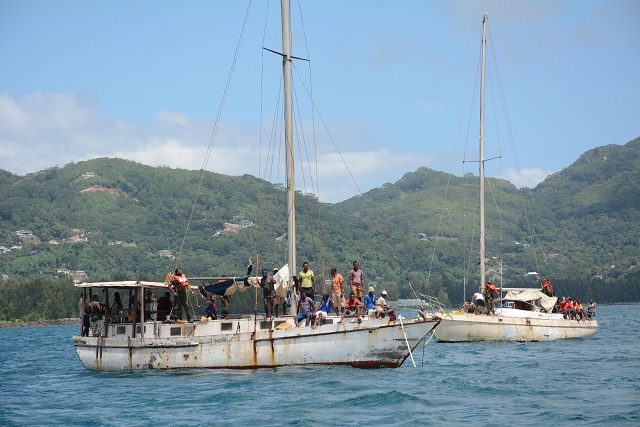 ‘Soa Vahihy and ‘Bordeur’, the two vessels intercepted with sea cucumbers believed to have been fished from the Seychelles waters. (Joena Bonnelame, Seychelles News Agency)

(Seychelles News Agency) - The Seychelles authorities including the police and the Seychelles Fishing Authority (SFA) are investigating the seizure of sea cucumbers found onboard two foreign fishing vessels intercepted last week, on suspicion that they were conducting unlicensed fishing activities within the Seychelles waters.

The two 'yachts turned into fishing vessels' have been identified as ‘Soa Vahihy and ‘Bordeur’, hailing from the neighbouring Indian Ocean island of Madagascar.

They arrived in Port Victoria this morning escorted by the island nation’s Coast Guard, which intercepted them on Wednesday September 30.

Patrol vessel ‘Etoile’, was undertaking routine surveillance of the Seychelles Exclusive Economic Zone when it spotted the two vessels, some 561 nautical miles South-West of the main Seychelles island of Mahé, in the vicinity of the Cosmoledo Atoll.

“As per procedure, the Coast Guard sent a team to investigate the vessels. They discovered the vessels were foreign-owned and that they were not supposed to be there. Once on board vessels, they verified the contents and then informed the relevant authorities so they can carry out the necessary investigations,” the Public Relations Officer of the SPDF, Major Jean Attala told SNA.

There are 29 crew members, all Malagassy nationals onboard the two boats, 14 onboard ‘Bordeur’ and 15 onboard ‘Soa Vahihy’ and according to information gathered they left Madagascar on September 25.

Ongoing investigation will determine the exact amount of sea cucumbers found in their possession.

“The amount is yet to be determined, but the sea cucumbers onboard the two vessels might be between 20 to 40 cm in length,” SFA’s Monitoring Control Manager Roddy Allisop told SNA.

Alisop went on to explain the owner of the vessels will be fined should the investigation prove they were conducting illegal fishing activities in the Seychelles EEZ and that the vessels, along with their crew will then be escorted out of the Seychelles’ waters.

“..Vessels are sometimes fined up to $45 thousand,” said Allisop.

Seychelles is considered to be a hot spot for sea cucumber fishing in Africa and Indian Ocean, according to a global review on fisheries and trade published by the Food and Agricultural organization in 2008.

The harvesting of the species is only permitted during the months of October to June.

However, licenses to harvest sea cucumber are only issued to the locals, and there are presently only 25 Seychellois authorized to undertake this activity. Sea cucumbers are mostly exported to the Asian Market.

According to the SFA, three illegal fishing vessels have been intercepted in the Seychelles waters since the beginning of this year.

The Seychelles archipelago consists of 115 widely-spread coral and granitic islands, and the nation’s Exclusive Economic Zone (EEZ) covers a vast 1.3 million square kilometres of ocean, an area which is often difficult to police for illegal fishing activities.