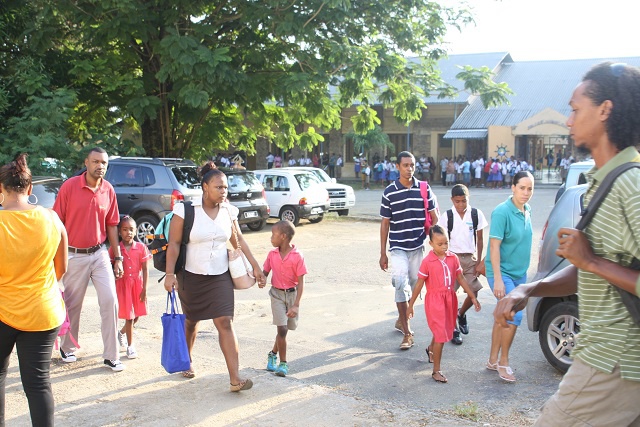 Parents accompanying their children to school. Education programmes along with public expenditure and investment, health and access to credit are some of the sectors which the World Bank funding is aiming to improve. (Joe Laurence, Seychelles News Agency)

(Seychelles News Agency) - The World Bank has approved a loan of $5 million to the Seychelles to aid shared prosperity and growth in the small island developing state.

According to a press statement issued by the Bretton Woods institution last week, the World Bank’s Board of Executive Directors approved the loan, which will be made available through the International Bank for Reconstruction and Development (IBRD) arm of the organisation.

The Seychelles archipelago of 115 islands situated in the western Indian Ocean, with its population of an estimated 93,000 inhabitants, will use the funding to improve public expenditure and investment, health and education programmes as well as improving local access to credit.

“So far, Seychelles has achieved impressive results on improving the quality of public services such as education and primary health care and these gains need be sustained,” he said in the statement.

Seychelles embarked on a five-year IMF-assisted economic reform programme in 2008 after mounting external debts and the global economic crisis led the government into default.

In March 2014, the former IMF mission chief for Seychelles, Marshall Mills, announced support from the Executive Board for a new generation of reforms under the Extended Fund Facility (EFF) for the Seychelles, in line with the government's target to reduce public debt-to-GDP ratios to below 50 percent by 2018.

Responding to an email query from SNA this morning, the Ministry of Finance, Trade and the Blue Economy's Director of Public Debt, Brian Charlette, said the loan agreement had not yet been signed by Finance Minister Jean Paul Adam, and that therefore the details of the loan's interest rate and repayment schedule could not yet be made public.

He did however reveal that the country's public debt to GDP ratio currently stands at 66 percent, an increase of three percent since last October.

According to the World Bank, the $5 million loan will be funnelled through the Ministry of Finance, Trade and the Blue Economy to “improve the efficiency of public expenditure and the country’s business environment through greater access to credit and improved public investment”.

Upgraded in mid-2015 by the Bank from an upper-middle income to a high income economy, the small island developing state now has a Gross National Income (GNI) of US$13,990 per capita, according to the World Bank.

The mainstays of the archipelago’s income are tourism and fisheries, but both sectors remain vulnerable to external shocks on the global market.

According to the World Bank’s country profile on Seychelles, the island nation earned $1.4 billion dollars last year, with the majority of its income coming from tourism, fisheries and the offshore financial industry.

The Seychelles is currently sub-Saharan Africa’s top earner in terms of GNI per capita.

However, the Bank cautioned that the country’s main challenge lay in ensuring what it has termed as the 'bottom 40 percent' of the population, also benefit from the increased income status through more employment opportunities and improved public services.

“Seychelles has had a good performance in reducing poverty,” said the World Bank’s task team leader of the project, Rafael Muñoz Moreno. “Social indicators are impressive and the country has achieved most of the Millennium Development Goals, especially for education, health, poverty eradication, and the environment.”