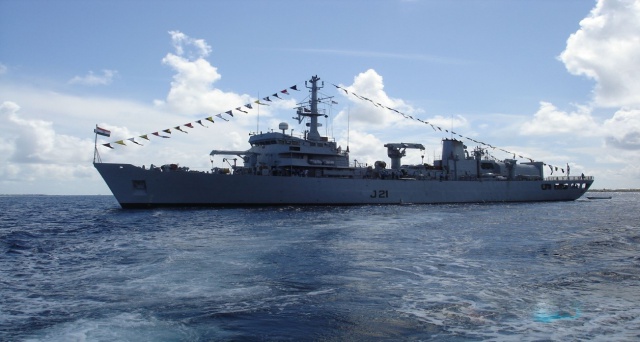 The survey by INS Darshak will be conducted in two phases. (Indian High Commission)

(Seychelles News Agency) - Indian Hydrographic Survey Ship, 'INS Darshak' has arrived in Seychelles to collect hydrographic information that will be used to prepare navigational charts, which is expected to benefit the island nation's Coast Guard and mariners in general.

The vessel docked in Port of Victoria on Thursday ahead of its 31-day mission in the Seychelles waters.

The hydrographic survey is expected to be conducted in two phases, with the vessel departing Port Victoria on Sunday November 8 returning on November 21 before heading out again on November 24 until December 8.

Relevant stakeholders were informed on the details of the study during a meeting this morning chaired by Lieutenant Colonel Simon Laurencine.

Laurencine told SNA that two Seychelles Coast Guard officers will be joining INS Darshak's crew of 17 officers and 152 sailors for the expedition.

“We will benefit with hydrographic information that will be used to prepare navigational charts. The Seychelles Navy also has its own small hydrography office and the two officers by being on the vessel with benefit from training,” said Laurencine.

The survey will be concentrating off Port Victoria and in the nearby area covering mainly the north east of the main island of Mahe.

According to the Seychelles Maritime Safety Administration, SMSA, 'INS Darshak' will be accompanied by 4 Motor boats displaying Navy Flag and mariners especially small fishing boats are being advised not to obstruct the passage of the survey boats during the operation.

Hydrography is one of the fields in which agreements for cooperation were signed between Seychelles and India during the visit of the Indian Prime Minister Narendra Modi to the Indian Ocean island nation in March this year.

According to a press statement issued by the Indian High Commission in Seychelles, the Indian Navy vessel, 'INS Darshak' is fitted with the latest state-of-the-art specialized survey equipment like Multi-beam Sonar, a fully automated Digital Surveying and Processing System.

“....The ship is also carrying a Chetak Helicopter, primarily used for determination of geographic extent and nature of coastline,” reads the statement.

This is not the first time the ship has come to Seychelles, having visited the island nation between September to November 2010 and again in March 2012 and has also undertaken similar surveys in the region including in the Maldives, Mozambique and Mauritius.