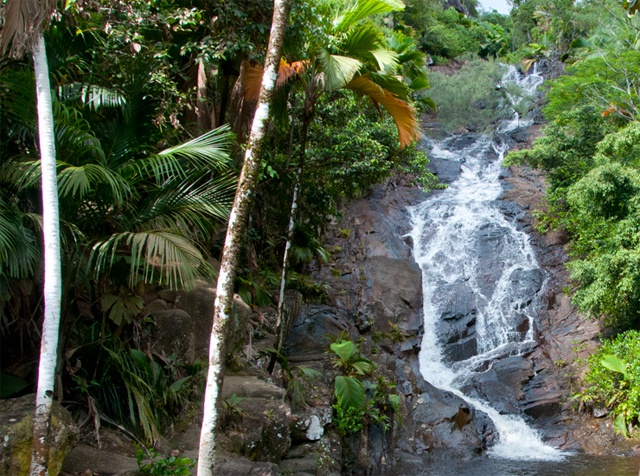 Water flowing among the rocks on the main Seychelles island of Mahe. Water shortage remains a concern in the Indian Ocean archipelago especially during the dry period. (Gerard Larose, Seychelles Tourism Board)

(Seychelles News Agency) - Water shortage, which is a global concern with changes in rainfall patterns, is not something new to Seychelles, an archipelago of 115 islands in the western Indian Ocean.

Although the island nation with a population of 93,000 people, records on average 2,300 millimetres of rain every year, during the dry season in the south-east monsoon from May to October, water shortage persists resulting in rationing being enforced by the local Public Utilities Corporation (PUC).

In addition the Seychelles climate change strategy 2009, states that the changes in the weather patterns between the period 2010 to 2100, may increase the water shortage severity on the three most populated islands; Mahe, Praslin and La Digue.

The strategy attributed it to less rainfall during the dry period in the south-east monsoon which will reduce stream flow and ground water recharge, the increase in surface-air temperatures and the increase in rainfall intensity causing greater surface run-off and less water to be captured in existing storage facilities.

“The amount of water that the rainy season brings every year should be sufficient to meet the population demand which is 40,000 cubic metre per day,” says Franky Dupres, Principal Engineer in PUC’s Water Section.

However, the Seychelles as mid-oceanic granitic islands, have gigantic rocks and boulders together with slippery slopes and this cause most of the rainwater to go down as surface run-offs to the sea.

Furthermore with the gradual increase in population resulting in the need for more infrastructural development, the various surface activities are causing water to run underground.

Dupres says they have noticed that today some rivers on the main island of Mahe, like Rodas at Le Niol, in the northern part of the island, which used to have water for long periods during the year are now drying up faster.

It is for this reason that the island nation is looking at other ways of not only managing water resources but also exploring other means of finding water; one of the sources being studied is ground water.

Seychelles Minister of Environment, Energy and Climate Change Didier Dogley together with other local partners went on fact-finding mission to Sweden last month. A representative of PUC and a geologist from PetroSeychelles a state owned company responsible for regulating the hydrocarbon sector of the Indian Ocean archipelago were also part of the delegation.

The highlight of the visit was to see the possibility of getting assistance from the Swedish government to drill for underground water in the archipelago.

They met with Research Institutes such as the Sweden Environmental Research Institute, the Stockholm International Water Institute (SIWI) and Atlas Copco, a company that manufactures a wide range of equipment and machinery used for earthworks and drilling and discussed the operations techniques of groundwater exploitation.

“We are probably the only oceanic granitic islands in the world and granitic islands normally don’t have aquifers (underground layer of water-bearing rocks) but if the rock is fractured or if there are these dykes that go down 100 metres, water will accumulate in those dykes when it rains, we can have substantial water each time it rains,” said Dogley in an interview with SNA.

Sweden was the chosen country for exploring such assistance as it has a granitic nature more similar to Seychelles and the Geological Survey of Sweden (SGU) is an agency with expertise in groundwater. It was one of the key organisations that was visited during the Seychelles mission.

Dogley explained how the process will work for Seychelles as; “The idea is when it rains you let the water accumulate in the cracks within the rocks, the accumulation of water will be like a dam only underground, deep into the soil, during the dry season in April, May when it gets really dry there will be an additional source of water instead of using 100 percent desalination.”

Drilling for underground water is not something new to the Seychelles islands. In the late 1990’s the Gondwana Water Drilling company was set up to test 8 wells in the mountainous areas of Mahe.

SNA met with Selwyn Gendron who worked with the company and is now the Chief Executive of the local Gondwana Granite company.

“In one borehole, we found water up to 2 litre bottles a second which is not negligible,” Gendron told SNA.

He said that the company found significant water and drilled wells in which they extracted 3 litre bottles per second in the hills of Les Canelles in the Anse Royale district in the south, and Rochon in the central district of Mont Fleuri, both on the main island Mahe.

The Gondwana boreholes of Rochon and Les Canelles are still in operation today.

“That one [Rochon borehole] was a very rich well. It gave 3 litres a second, in an hour we would get say about 3.6 to 7.2 cubic metres. It’s not a lot of water but it is still significant.”

According to Dupres, who was part of the fact-finding mission in Sweden, if they could get a borehole with at least 5 litres per second, it will be enough to meet the daily demand.

Gendron agrees that the investigation for boring groundwater as one of the sources of water for Seychelles is a worthy exploration.

“There is certainly enough rainwater falling on Mahe to provide all our supply. I think it’s a good idea but not on its own but together with other sources. I would say with the way Mahe is, you probably can find water everywhere, that’s why after heavy rainfall you see water coming out of the rock, these fissures are there,” said Gendron.

He added that there is the potential and with an average of 4 persons per household in the country, a borehole can supply up 24 to 50 homes in a day.

“At present, surface water is the main source of water in the Seychelles islands and this is supported by desalination during the dry season. The aim of the exploration in groundwater sources is to make it the second pillar instead of desalination which will be a third option,” explains Dupres.

La Digue is the only one of the populated islands not totally relying on surface water as the island has a supplement and during very dry season they also use their desalination plant.

Didier Dogley confirmed that the plan to identify water sources in the Seychelles islands will start early next year.

The areas for drilling will mostly concentrate in the mountainous areas because of the probability of salt water intrusion in the coastal areas. The two most populated islands, Mahe and Praslin will be the first areas to start and the aim is to source out 20 percent of the water that Seychelles needs.

Although there has been drilling of around 20 boreholes in Seychelles by the Gondwana company and PUC, a dedicated study has not been carried out to find out where the underground water sources are located.

Following the visit to Sweden, a local technical committee will be established with local experts in geology, hydrology and environment and a section set up for underground water resources in PUC.

Dogley said the first phase will be the desk study and amassing of information already available about the geology of Mahe and Praslin. However, some of the information would have to be retrieved from the British Geological Survey because all of Seychelles’ surveys were done when the archipelago was still under the British Colonial rule.

The Swedish experts will then work with Seychellois geologists to map interesting areas and from then on begin the drilling.

Optimistic about the project, Dogley stated that with a source of water from underground, the existing dams, and desalination plants, the country might not need to invest in an 80 million dollar dam, in the immediate future.

In August last year, PUC announced plans to raise the level of La Gogue dam so that it can store up to 60 percent more water.

To compensate for the dry season, a total of 1 million cubic metres of desalinated water is produced from four desalination plants every year, to be consumed by the population as potable water.

Two of these plants are on the main island of Mahe, one on the second largest island of Praslin and one on La Digue Island, the third most inhabited island.

Limited storage, as well as water losses along the network, currently means the country can only meet 60 percent of its water needs.

It is expected that demand for the scarce resource on the main island of Mahe only is expected to rise by 130 percent by 2030.