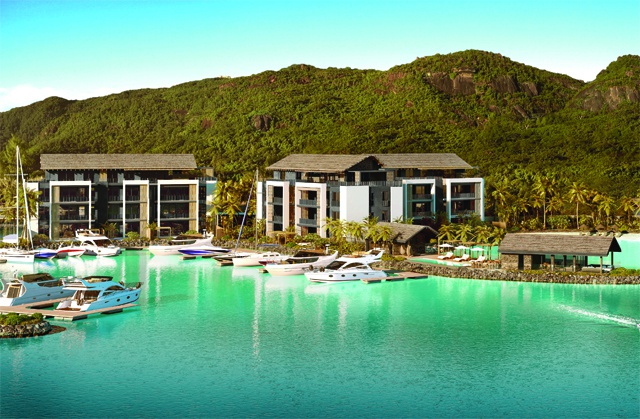 A partial aerial impression of the project, construction of the Pangia Beach development is set to start early 2016 ending in mid-2017. (Pangia Beach)

Pangia Beach a project consisting of only 33 apartments of one to four bedrooms and penthouses has received a 5 star award for Best Residential Development in Seychelles, at the 2015 International Property Award summit for Africa & Arabia, held in Dubai last week.

The event saw presentation of awards to various winners from the region judged in different categories relating to property and the real estate industry.

Projects submitted are first judged on a regional basis, after which the best are eligible to represent their respective regions and stand a chance to win a World’s Best accolade at the International Property Award ceremony.

While Pangia Beach was the only Seychelles projects featuring in the various categories this year, Seychelles’ residential and commercial properties are not new to the awards, as five projects in the island nation emerged award winners for Africa last year.

The company behind the Pangia Beach development is Panosco Properties established by Panos Papakokinos, who was the honorary consul general for Greece and Cyprus in Seychelles.

Papakokinos who arrived in the Indian Ocean archipelago of 115 islands as a businessman in 1971 passed away in 2012.

It is his only daughter Georgia, who was born and raised in Seychelles together with her Belgian husband Vincent Van Heyste, now running the company, who are behind this new development, after moving from London to the Indian Ocean island nation in 2014.

“Pangia Beach [representing the first three letters in Panos and the last three in Georgia] is much more than just luxury beach apartments. It’s also a story of love, legacy and homecoming. It’s a project started by Georgia’s father which was his dream but could not accomplished before he passed away and now passed on to the next generation,” Vincent told SNA.

The luxury residential apartments will be built on a piece of reclaimed land on the eastern coast of the Seychelles main island of Mahé, going up Providence only a few kilometres from the island nation’s capital of Victoria.

The project designed by a South African architectural firm, SAOTA, are already up for sale to interested buyers; prices starting at $445,000 up to $895,000 but it is believed the value of the apartments will increase over time.

Georgia, an interior designer owning a company in London and Vincent having worked for over a decade in international investment banking in London and New York have used their combined skills and expertise to drive such a large-scale project, which is expected to be completed mid- 2017.

“We’ve sold apartments already…three apartments; two were sold to Seychellois…so we are trying to attract both locals and foreigners.”

The 5 star award for Best Residential Development in Seychelles presented at the regional award ceremony in Dubai is not the end for Pangia Beach, as the development has also been nominated to represent Africa at the International Property Awards ceremony, to be held in London on December 7, 2015.

As the African region nominee, Pangia Beach will also compete against winners from the other regions of Arabia, Asia Pacific, Americas, Europe and UK standing a chance to be declared the international winner and claiming the Top Award in its category, at the same event in London.

“It’s satisfying to know that the judges appreciated our sense of aesthetic and pursuit of perfection. We take great pride in representing Seychelles and these accolades confirm that with a focus on quality and perfection, Seychelles can easily compete against Mauritius and South Africa in developing high-end residential properties for the discerning home owners,” says Vincent.

IPA which is open to residential and commercial property developers across the globe has been recognising the highest achievement in four main sectors of property and real estate revolving on development, architecture, interior design and real estate since 1995.

Over 80 experts drawn from diverse property disciplines judge all the entries submitted from all over the world as they are split in the regional categories as well as for the overall international awards which determines the finest properties worldwide.

Over 2,000 companies from over 100 different countries are said to have taken part in this year’s edition of the award.

With phase one of award-winning residential project in Seychelles complete, buyers to move in