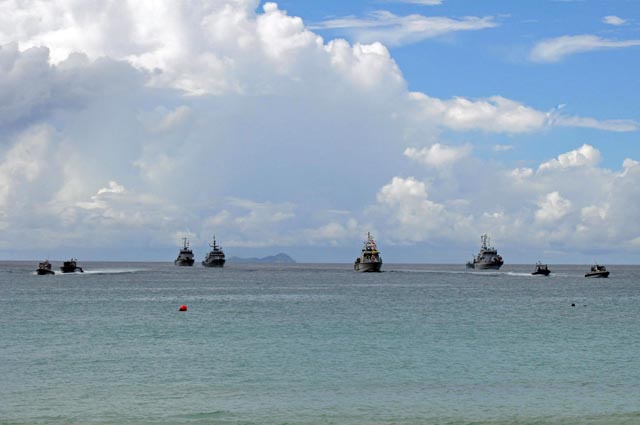 (Seychelles News Agency) - Nine vessels of the Seychelles Coast Guard; four patrol ships and five fast response boats, along with two marine patrol aircraft, gathered off the island nation’s north coast on Saturday afternoon in a display of the country’s naval might.

Beau Vallon beach, one of the island nation’s most iconic and popular beaches, was the setting of the Seychelles’ first Naval Fleet review, organised as part of activities to commemorate Defence Forces Day.

Held each year since 1982, the Defence Forces Day is to commemorate the successful repulsion by the Seychelles defence forces of a mercenary invasion on November 25, 1981.

The Naval Wing Commander of the Seychelles Coast Guard, Lieutenant colonel Simon Laurencine has described the naval fleet review, which is practiced by navies worldwide traditionally to showcase their naval strength and evolution of their naval force, as an opportunity for the Seychellois public to see what the navy is about, what it does and what it posses in terms of assets.

“In spite of our country being small, Seychelles has a vast ocean territory which falls under the responsibility of the Coast Guard. The unit [coast guard], which is the largest within the Seychelles defence forces is expanding and…we wanted to showcase the power of our naval fleet,” Laurencine told SNA in an interview.

The event also saw various displays or tactical formations by the patrol vessels and aircraft. According to Laurencine the naval officers had undergone three weeks of training to put up such a display.

The event at the Beau Vallon Beach also featured an exhibition onshore where those present could have a closer look at what military work really entails while the Indian Navy also took the opportunity to present to the Seychelles Coast Guard a 'fair sheet' featuring preliminary hydrographic data gathered by Indian Naval Ship INS Darshak.

The Indian Hydrographic Survey Ship, is on a 31-day mission in Seychelles to collect hydrographic information that will be used to prepare navigational charts, which is expected to benefit the island nation's Coast Guard and mariners in general. The mission is expected to end on December 8.

While search and rescue has remained one of the main responsibilities of the Seychelles Coast Guard with Seychelles being surrounded by over 1.3 million square kilometres of ocean, and with stories of fishermen lost at sea or boats in distress not being uncommon, in recent years the military force has had to deal with other pertinent issues including the scourge of piracy.

The Seychelles Air Force has played an integral role in air surveillance of the vast maritime zone, together with international partners such as India and the EU, in the fight against piracy

Seychelles having been at the forefront of the fight against piracy in the Indian Ocean since 2005, has also seen the island nation’s Coast Guard undertake at least three naval rescue operations at sea where hostages were rescued.

Although piracy is on the decline in the region, there are other maritime crimes that need to be tackled to ensure maritime security in the region, including illicit drugs and arms trade as well as human trafficking and illegal, unreported and unregulated fishing.

“We are still working hard to ensure that our EEZ [Exclusive Economic Zone] remains a safe place for all sea farers provided that they are not doing anything illegal,” said Lt. Colonel Laurencine.

The Seychelles Coast Guard aims to attract more dynamic people to join the force and to have more resources to be able to discharge their duties of defending the island nation’s maritime sovereignty and preventing maritime crimes in the Seychelles waters.