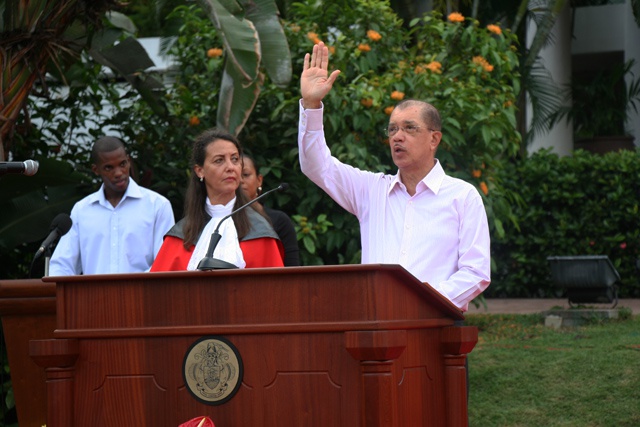 The swearing in ceremony, which saw Michel take the Oath of Allegiance and Presidential Oath before the island nation’s Chief Justice Mathilda Twomey, was held in the garden of State House, in the capital, Victoria.

His running mate, Danny Faure also took the Oath of Allegiance and Oath of Office as Vice President in the same ceremony.

According to official results published by the Electoral Commission Michel was re-elected winning 50.15 percent of the votes.

His rival Wavel Ramkalawan won 49.85 percent of the ballots. Ramkalawan has rejected the results and have written a letter to the Electoral Commission requesting a recount of the votes.

Addressing guests right after he was sworn into office this afternoon, Michel described the election results as a ‘victory for democracy in Seychelles.’

“The result of the election does not mean that our nation is divided. We have always lived together, worked together in spite of our diverse opinions. And this will continue under my new administration,” said Michel.

“Some are not satisfied with the results of the election. We [Parti Lepep] also feel a bit disappointed. We would have liked more support…those who have doubts about the result of the vote, should bring their case to court and allow the court to decide.”

Starting his third and final mandate at the helm of the island nation’s government Michel has pledged to continue the work started and to bring about stability, continuity and change.

“Through this election you [electorates] have sent me a clear and strong message. I have heard and understood. You have given me five more years to put more things in order…in all sectors…more order and development in the districts, community, to improve the standard of living,” said Michel.

The Seychellois Head of State has highlighted several priorities he would like to tackle during the first 100 days of his final mandate.

Improving service delivery especially in the public service, job creation, empowerment of the private sector, improving access to credit for people wanting to have their own dwelling as well as the fight against drugs were some of the priorities highlighted.

With regards to the fight against drugs Michel has spoken about the need for regional countries to have a coordinated approach to tackle the problem.

“I will propose the setting up of a new regional structure for intelligence, coordination and operation to combat drug trafficking at the Indian Ocean Commission level. We need to tackle the scourge in the same way we fought against piracy, with the cooperation of neighbouring countries and international partners.”