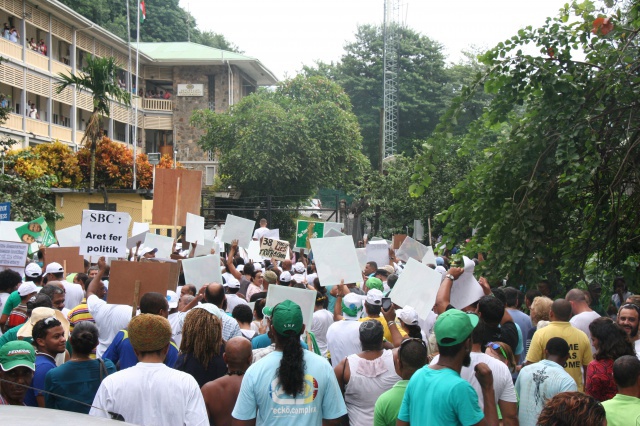 (Seychelles News Agency) - Opposition parties marched in a show of protest against the state broadcaster -- Seychelles Broadcasting Corporation (SBC) -- accusing the station of a lack of impartiality.

Several hundred people walked 3 kilometres through the streets of Victoria, the capital, to SBC headquarters at Hermitage. The peaceful marchers carried banners asking for more freedom of expression.

The state-run television station of Seychelles, a group of 115 islands in the western Indian Ocean, is accused of giving more coverage to the government to the detriment of the opposition.

The event that sparked the protest was the presence of Seychelles Finance Minister Jean-Paul Adam in the SBC News Extra, which follows the main news. Adam appeared on the segment for three consecutive days to explain the main points of the 2016 budget.

“This march is basically against the way SBC works. Since the beginning of the year, we see ministers every evening on SBC television. We would like different opinions to be included and taken into consideration,” said Wavel Ramkalawan, leader of the Seychelles National Party (SNP) in an interview with SNA.

Ramakalwan was President James Michel’s opponent in December’s two-man run-off for the presidency. The electoral commission said that Ramkalwan received 49.85 percent of the vote, an outcome that he is contesting in court.

The march Thursday coincided with the first day of the process for the SNP petition contesting the results of the election. The country’s top court has given the government’s side until February 2 to present its case. Witnesses are scheduled to begin testifying February 15.

“We had not foreseen the case going to court (Thursday). We had already planned the march,” Ramkalawan told SNA.

The protesters gathered in front of the SBC television headquarters and the opposition leaders presented a letter to the SBC’s chief executive Antoine Onezime and Chair of the Board Patrick Nanty.

SBC said it will respond to the accusation later this week. The crowd dispersed peacefully.

SBC television is an independent organisation functioning under a board of administration. Members of the board are nominated by the Seychelles’ president following nominations from governmental agencies.

Only the chief executive and the chair of the board are nominated by the Seychelles’ president.

The main opposition party SNP is not represented in the country’s national assembly since it boycotted the legislative elections in 2011. Only the People's Democratic Movement (PDM) has a seat in the assembly.

Protest marches in Seychelles – an island nation with a population of 93,000 -- are rare. The last one was in December 2014 when the opposition protested against the rising cost of living and excessive taxes on vehicles.