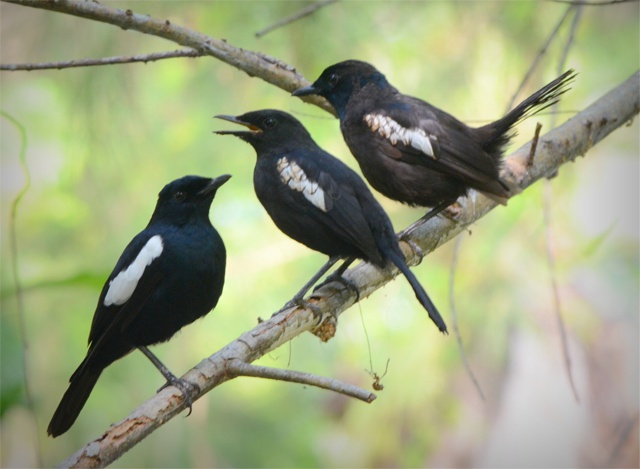 Three Seychelles Magpie Robin pictured on Denis island one of four endemic birds whose populations have increased thanks to the eradication of intrusive species. (Janske van de Crommenacker)

(Seychelles News Agency) - When your island hosts four of the most endangered and unique birds of Seychelles, and they are threatened by invaders, a conservationist says that removing those invaders is the only solution.

This strategy proved to be successful on the island of Denis where four endemic birds of Seychelles were introduced in the early 2000s in order to protect and increase their population.

Late last year, the island announced that after an intense eradication programme, the intrusive and often aggressive myna birds have been completely wiped out on the island.

A recent survey has shown a gradual increase in populations of Seychelles magpie robin, Seychelles paradise flycatcher, Seychelles fody and Seychelles warbler since the eradication of the mynas.

“The population of fody and warbler have grown a lot since their introduction,” says the environment manager of Denis Island, Dr. Janske van de Crommenacker.

The paradise flycatcher which has a small population on La Digue, the third-most populated island of Seychelles, has also been doing very well on Denis with about 70 birds.

The magpie robin, after a successful introduction on Cousin and Cousine, near the second most populated island of Praslin, has 61 to 65 birds.

“The Seychelles magpie robin needs much bigger territories so those populations seem quite small, but this is normal when we compare our population sizes with those on other islands,” says Van de Crommenacker.

The four endemic birds of Seychelles, a group of 115 islands in the western Indian Ocean, were introduced on Denis Private Island in 2004.

Denis Private Island is privately owned and located 85 kilometres north of the main island of Seychelles, Mahe, and has its own conservation team. The bird census on the island was conducted over several months using different methods and volunteers from the Green Island Foundation, a non-profit organisation.

The environment manager of Denis says a common way of doing a bird census is by digitally laying a point count grid over the island map and then visiting every point to count the number of birds you observe for a fixed number of minutes.

“For some species it is better to observe them individually and make a territory map with all the families throughout the island. For this technique, birds are caught and colour-ringed to recognize the individuals in the field.”

This exercise, says van de Crommenacker, is important to verify whether the populations of these species are expanding accordingly or at least staying stable.

“If there would be a problem that causes the populations to decline, we would also pick that up during our censuses,” he said.

With several young fledglings recorded during the census, it looks like Denis Private Island will soon have more avian inhabitants.

Air Seychelles adds a new Airbus A320neo to its fleet