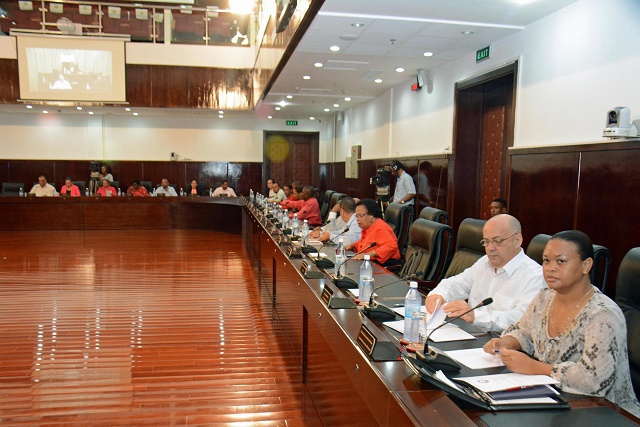 (Seychelles News Agency) - New legislation concerning initiatives announced by Seychelles' President James Michel in his State of the Nation Address on February 16 will be presented to the members of parliament for approval before the end of their term in 2016.

Attorney General Ronny Govinden confirmed the news in an interview with SNA on Monday.

Govinden was providing details on the new legislation that received cabinet approval during an extraordinary session on Monday.

The Cabinet of Ministers met to discuss and approve draft legislation concerning the limiting of the president and vice-president’s mandates to two terms instead of the current three five-year terms, the decriminalization of homosexuality, the setting up of an Anti-Corruption Commission and the delaying of ministers and parliamentarian pensions until they reach the legal retirement age of 63, as applicable to everyone in Seychelles.

The slashing of the presidential and vice-presidential terms would require the National Assembly members to approve amendments to Articles 52, 52A, and 66A of the Constitution of Seychelles, a 115-island archipelago, in the western Indian Ocean.

"With regards to modifying the law, which governs the presidential mandates, the National Assembly only needs a majority vote, because there is no question of changing a tranche of the constitution, and for that we do not need two-thirds,” Ronny Govinden said to SNA.

President Michel stated in his State of the Nation Address that “neither I, nor the vice president, nor the ministers we have appointed, wish to cling on to power.”

To prevent the abuse of power, many African countries have included in their constitution, a limited number of presidential terms to be served by a head of state.

That is also the case of the United States, where President Barack Obama will be coming to the end of his second and final four-year term in January 2017.

"We will be presenting this new legislation to the members of parliament as soon as possible. We first have to prepare the bill that will be presented to the national assembly, but I cannot say when exactly this will happen," said Govinden.

The bill will be presented to parliament soon enough, because it is expected that Seychellois voters will be called upon to vote in a new National Assembly as early as the second session of parliament for this year.

The Seychelles President James Michel was declared winner of the last presidential elections on December 18, 2015, to serve his third and final mandate at the helm of the island nation’s government.