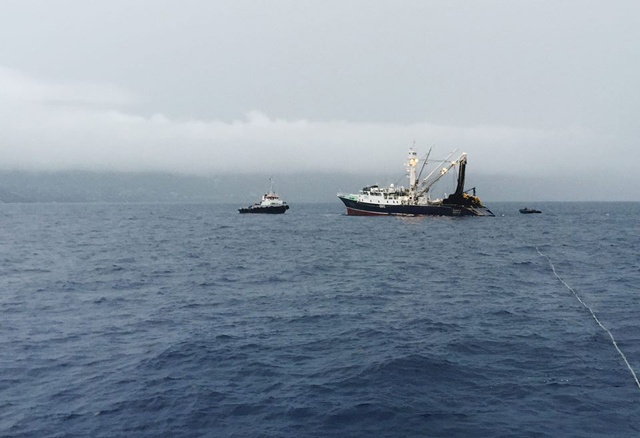 The Director General of the SMSA, Captain Joachim Valmont told SNA that the ship, Oriental Kim, was dragged out to sea shortly after 5 pm.

"We were at L'Ilot, Glacis since 4 pm and the job was done by two tugs and a skiff," said Valmont adding that the vessel is now being monitored to see if it is not taking in any water.

"At the same time the tugs are getting ready to tow the Oriental Kim to the vicinity of St Anne," Valmont added.

There had been two unsuccessful attempts to re-float the boat on Wednesday afternoon and early Thursday morning.

The Seychelles Port Authority that was coordinating the salvage operation had resumed work together with its stakeholders since Thursday morning for the third attempt at getting the stranded ship back in the water.

"Our strategy has worked this time. After the failed attempts we sought advice and worked in collaboration with our stakeholders and we managed to get the boat back into the water," the Port Authority's chief executive, Andre Ciseau told SNA.

According to Ciseau work to tow the boat should be completed later this evening.

The Oriental Kim was heading towards Port Victoria when it ran aground and got stuck among some rocks at L'Ilot, Glacis on the northern coast of the Seychelles main island Mahe.

It's not yet clear how this happened and an investigation is currently ongoing. The vessel is carrying around 700 tonnes of tuna.