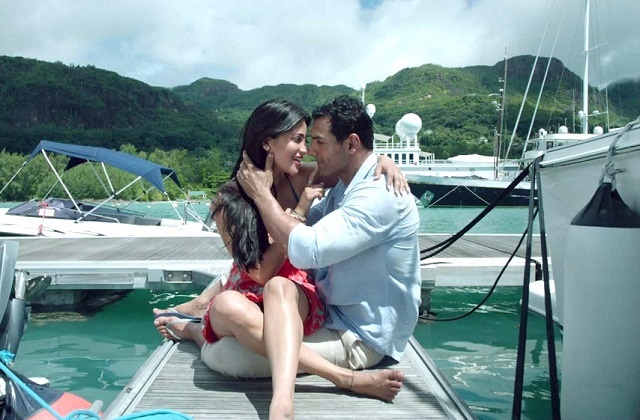 Screenshot taken from the Music Video 'Rehnuma' shot in Seychelles which will be in the action-thriller 'Rocky Handsome to be released on March 25, 2016. (T-Series/Youtube)

While the Hindi action-thriller ‘Rocky Handsome’ itself was not shot in Seychelles, the movie's producers shot a music video shown in the movie on the island nation.

Abraham and Shruti play the lead roles as husband and wife in ‘Rocky Handsome’, which is described as “a loose adaptation of the 2010 Korean film 'The Man from Nowhere.'” It tells the story of a man who sets out to take vengeance against drug mafia after they take away an eight-year-old girl with whom he shares a special bond.

As Bollywood movies typically feature songs and dance, there are other songs associated with Rocky Handsome, but only ‘Rehnuma’ was shot in Seychelles.

The Seychelles Tourism Board, national airline, Air Seychelles and a few hotels have supported the filming of the Bollywood movie song in the island nation.

The movie is set for theatrical release in some 2,200 cinemas across the world on March 25.

Once released the movie is expected to help portray the beauty of the Seychelles and further promote the island destination in India and beyond.

Although Seychelles is often described as one of the most picturesque places in the world, the 115-island archipelago in the western Indian Ocean has rarely been the setting of a big-budget film, apart from a few like Jonathan Frakes' 'Thunderbirds' (2004) and Roman Polanski's 'Pirates' (1986).