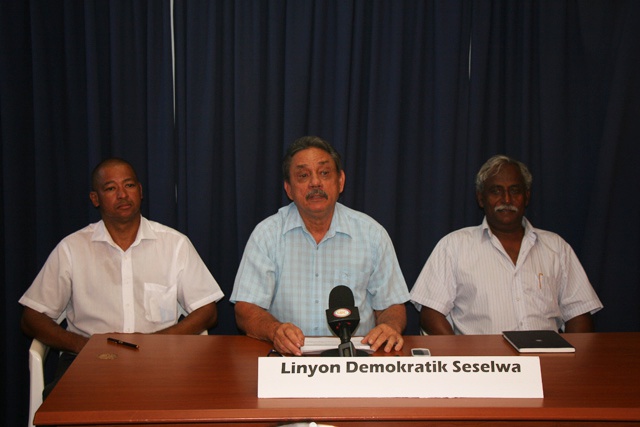 (Seychelles News Agency) - Linyon Demokratik Seselwa, or the ‘Seychellois Democratic Alliance,’ is a new party formed by members from four existing opposition parties in the 115-island archipelago in the western Indian Ocean.

SNP’s Roger Mancienne is the party leader, Lalyans Seselwa’s Clifford André the secretary general and Roy Fonseka of the Seychelles Party for Social Justice and Democracy is the treasurer.

In a press conference held on Tuesday, Linyon Demokratik Seselwa said the first task ahead is to identify the representatives of their party who will stand as candidates in the upcoming parliamentary elections.

Parliamentary elections in Seychelles are held every five years. The next one is scheduled before September 2016 as the last elections took place in September 2011.

For now, the Seychellois Democratic Alliance has not finalized its list of candidates as discussions are ongoing to find candidates who will run.

"Our leaders have begun discussions to have a common list of candidates, and we have agreed on a good number them," Roger Mancienne, leader of the Seychellois Democratic Alliance said on Tuesday.

"Discussions are ongoing to find a solution for the ones not yet agreed upon,” he added.

Mancienne has also expressed his wish to see Perseverance, a reclaimed island joined to the Seychelles main island, Mahé, where the country has the largest ongoing social housing project, declared as an electoral district. This, he says, will allow the residents to vote in their district in the upcoming parliamentary elections.

The National Assembly gave its approval for Perseverance to be declared an electoral district, but the law has not been assented by Seychelles President James Michel.

Initially, the four parties behind Linyon Demokratik Seselwa had planned to register the new party as Linyon Sanzman, the banner under which they contested the presidential election run-off in December 2015. However, the name has been taken by a former activist of the Seychelles National Party and Popular Democratic Movement, Martin Aglae.

Mancienne has criticized the decision of the Electoral Commission to allow another party to register the name Linyon Sanzman, as the four opposition parties had already highlighted their intention to use the name.

The Electoral Commission explained in a Statement issued on Friday that guided by the Political Parties (Registration and Regulation) Act it had “considered the application that was submitted first, and that is the application of Martin Aglae.”