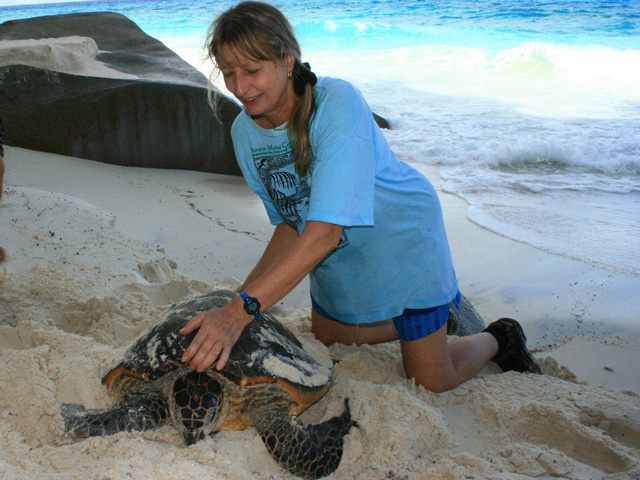 Jeanne Mortimer pictured with a nesting Hawksbill turtle. Mortimer has been working with sea turtles in Seychelles since 1981. (Marco Harms)

(Seychelles News Agency) - The Seychelles’ expert on sea turtle conservation, Jeanne Mortimer, says that to be recognised with a ‘Lifetime Achievement Award’ serves as motivation to keep at what she has been doing for decades.

The International Sea Turtle Society announced the recognition at its 36th annual symposium on sea turtle biology and conservation held in Lima, Peru, between February 29 and March 4, 2016.

“They make the award a surprise, so I did not know in time, I only found out afterwards,” Mortimer said to SNA this week.

The International Sea Turtle Society is a not-for-profit organization whose members are dedicated to the research and conservation of sea turtles around the world.

The Lifetime Achievement Award, given out since 2008, is aimed at recognising individuals who have had a significant impact on sea turtle biology and conservation through the course of their career.

Mortimer, often referred to as ‘Madanm Torti” or the Turtle Lady, has over 40 years of experience working with sea turtles.

The American-Seychellois biologist who started her career in 1973 in Central America has been working in Seychelles since 1981.

Mortimer says the years she has spent working in the 115-island archipelago in the western Indian Ocean have been filled with interesting moments.

“When I first came it was fascinating to get to know Seychelles. I spent five months in Cosmoledo with a dozen fishermen and they were all killing turtles but I could learn from them because they knew a lot about turtles and I could also learn Creole,” said Mortimer.

“I think one of the biggest satisfaction is when Seychelles changed the law that made it illegal to kill turtles and really took onboard the importance of conservation and the need to protect ecosystems in general,” she added.

The turtle lady believes that community monitoring projects that have involved not only foreign scientists but the local population as well are one of the things that has helped the numbers of nesting sea turtles rise from the lows of the time of rampant poaching.

Mortimer is now more involved in freelance work during which she partners with various groups and organisations working to protect sea turtles and promote conservation efforts particularly with the Island Conservation Society.

“We’ve set up a lot of turtle monitoring projects in Seychelles and those kind of keep me busy because I help them to make sure staff are trained and data are collected properly. We can make sense of what they’re finding and we can come up with reports,” she said.

Some of her upcoming plans include to fully develop a not-for-profit organisation called Turtle Action Group of Seychelles (TAGS) she started in 2008 with the aim of bringing all those involved in turtle conservation in Seychelles together.

“Also within the next two years I want to have a national symposium where sites where turtles are being monitored and groups interested in sea turtle education can participate to produce proceedings from that, where each organisation would have their own chapter. But the next step is another book that would be more of interest to the general public,” says Mortimer.

While she is proud of the advances in Seychelles’, which now has the fourth-highest nesting population of turtles in the world, Mortimer believes the species remain vulnerable.

She is also happy to see initiatives such as an annual sea turtle festival that is helping to generate an interest in the younger generation.

Mortimer, who has made Seychelles her second home, says she does travel to the US to see families and friends almost every year, but feels Seychelles is where she is really doing something worthwhile.