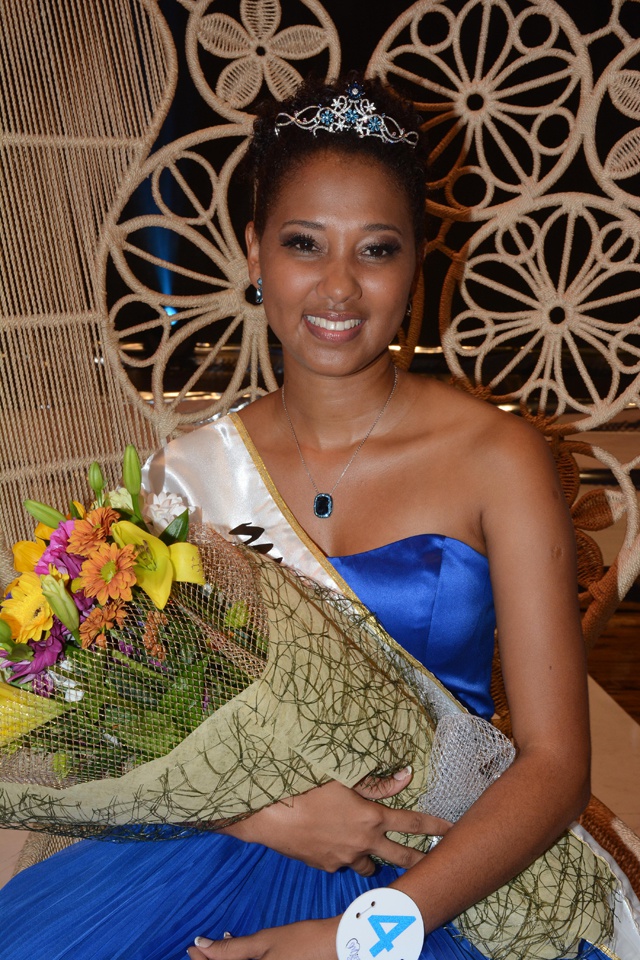 (Seychelles News Agency) - The island nation of Seychelles has a new beauty queen. Christine Barbier won the Miss Seychelles Another World 2016 title on Saturday evening ahead of 11 other contestants.

Barbier received the coveted crown on top of being named the girl with the best personality, talent and sporting abilities.

The 24-year-old accounts assistant from Cascade, in the east of Seychelles’ main island, Mahé, said the thought that the title was within reach began to dawn on her after she was awarded the Miss Personality, Miss Sport and Miss Talent titles.

“My legs had started to shake,” she said to SNA. Barbier was the oldest of 12 contestants vying for the crown.

The grand finale of the Miss Seychelles Another World 2016 beauty pageant -- a show of more than two hours -- was held at the International Conference Centre in the capital Victoria, which can hold about 600 people.

The contestants strutted their stuff in their casual, beach and evening wear against the backdrop of a glittering blue and white décor. Several popular local artists including Sandra, Telcy, Joseph Sinon, Angie, Antoinette Dodin, among others helped to liven up the show.

Sophie Rosette, Rita-Maria Durup, Samiya Albert, Christinne Barbier, Samira Nicoire and Lianne Barbé made the seven-member jury's list of six finalists. They had the daunting task of answering the judges’ questions before the ultimate winners were announced.

Six other titles were for grabs, apart from the four won by the new Miss Seychelles. Samira Albert and Lianne Barbé were crowned the second and first princesses respectively.

Albert, 18, from Pointe Larue in the east of the main island Mahé, also took home the prize for best evening gown. Barbé, 19, and the only contestant from Praslin, Seychelles second most populated island also bagged two other awards – miss photogenic and the people’s choice award. The people’s choice was based on a nation-wide public voting, online and through SMS.

Sophie Rosette, whose beauty with a purpose project -- a key element of the pageant -- was about creating awareness on the need to protect Seychelles' coastlines from erosion, took home the prize for displaying the best effort in presenting her project.

Barbier will embark on a year-long experience as a role model and ambassador for the country. One of her main tasks is to prepare for the Miss World beauty pageant later in the year.

Her priority she says is to “see through my beauty with a purpose project and make it a success,” as this is also an important aspect of the Miss World contest.

Barbier’s project entitled ‘Children's Home - Comfort, Care, Continuity,’ is all about helping to build a hostel or apartment for young adults who were brought up in a children's home and who have a hard time finding a home upon reaching age 18.

Speaking at Saturday’s event, the Chief Executive of the Seychelles Tourism Board, which is the main organizer of the pageant, said that the beauty with a purpose aspect adds a social dimension to the pageant, adding that it serves to teach the winner that beauty and victory go hand-in-hand with responsibility.

“In this modern world of ours it is no longer sufficient to be simply beautiful. Today the global audience is seeking more than that that’s why the buzzword of our time is beauty with a purpose,” said Sherin Naiken.

While she enjoys the moments of her crowning as the new Seychelles beauty queen and looks forward to the year ahead, Barbier is also encouraging other young ladies to take part in future Miss Seychelles pageants, which she has described as a memorable journey, where one stands to gain new experiences and knowledge.

The outgoing Miss Seychelles, Linne Freminot, who crowned her successor on Saturday, also had some words of advice and encouragement for her: “I feel a bit emotional after the journey, which has been filled with travelling and excitement. So my advice to Christinne is to enjoy her moments, be humble, wear the crown with pride and do not let the crown carry you, but you carry the crown.”