A new choice at the bar: Craft beer arrives in Seychelles 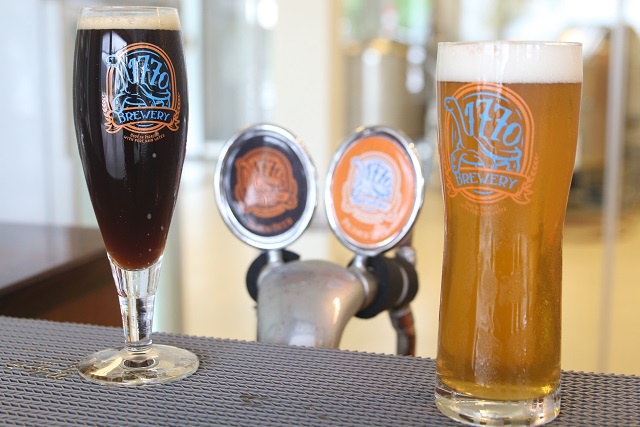 Craft beer is another option for beer drinkers in the Seychelles who up to April were used to drinking mass-produced beer by local and international companies. (Joe Laurence, Seychelles News Agency)

Since April, locals and visitors have been enjoying the new type of beer produced by the  1770 Brewery, located at Eden Plaza on the eastern coast of the main island Mahe.

The new beer is the brainchild of Russian master brewer Vladimir Borisenko, who together with his wife Natalya and friend Alexander decided to introduce an artistic way of making beer to the Seychellois public.

“Craft beer is produced anywhere in the world alongside bottled beer except in Seychelles. So we decided to give Seychellois an additional choice,” said Borisenko to SNA.

The new craft beer is available in light and dark and is made from the best ingredients from Europe, including Belgium, Czech Republic and England, said Borisenko. It costs around $5 for a small glass and $8 for a big one.

“We use top quality ingredients, and this is why craft breweries supercede big enterprises. We can choose from the best ingredients.”

The brewing is done on a small scale and according to Borisenko is more a hobby than a business as a lot of emphasis is on quality, flavour and the brewing technique.

“The master brewer is always looking for innovative ways of perfecting the beer like playing with ingredients so that his beer becomes unique,” said Borisenko.

Another unique aspect of the brewery is that customers when enjoying a glass of beer at the bar or on the patio can observe the whole process taking place inside the brewery through the glass windows.

“I wanted to make the whole process of beer production transparent to my customers,” said Vladimir.

This is done once a week and includes the fermentation area, where state-of-the-art tanks are lined up, and the storage area where bags of ingredients are stacked on top of each other.

Craft beer takes 12 hours for brewing and a 50-day fermentation period, during which the liquid is kept in big tanks, under different conditions.

Borisenko said so far the customer response has been very positive, and the brewery which opens daily, has a number of regular clients.

“There is a huge interest in craft beer around the world, and people are turning to craft beer as opposed to bottled or canned beer since it is more natural and organic and therefore healthier."

Borisenko says that in the Czech Republic craft beer is used as part of medical treatments including to remove kidney stones.

The master brewer, who learned his trade in the Czech Republic, also dismissed the popular myth that a person who drinks craft beer will gain weight.

“If you drink craft beer on a regular basis, your metabolism is adjusted. So a fat person will lose weight,” said Borisenko adding that beer whets the appetite, so eating a lot while drinking will make a person gain weight.

The 1770 Brewery has also tried to encompass Seychelles’ history and uniqueness through its logo and name.

So far 1770 Brewery relies on word of mouth for its marketing and the master brewer is satisfied with the turnout.

“We do not believe in those clichéd adverts which say we are the best or try our beer. We believe in people coming and tasting the beer and making their own conclusion,” said Borisenko.

According to 2011 data from the World Health Organisation, Seychelles was the third highest consumer of beer per capita in the world. The percentage of beer consumption in the 115-island archipelago fell from 85% of total alcohol consumed in 2011 to 67% in 2014.