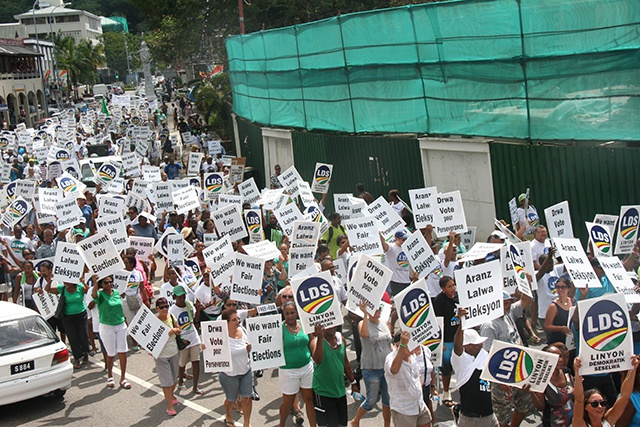 (Seychelles News Agency) - Leaders and supporters of an opposition coalition in Seychelles marched in a show of protest on Saturday as peaceful marchers carried banners calling for ‘free and fair elections’ and better electoral laws.

Several hundred people gathered at Stad Popiler before walking through the centre of the Seychelles capital, Victoria. The protest march was called by Linyon Demokratik Seselwa, LDS, or the ‘Seychellois Democratic Alliance’ -- a party formed in April by members from four existing opposition parties.

One of the leaders of LDS, Wavel Ramkalawan, also the Seychelles National Party leader, told SNA that aside of speaking out on the need for good electoral laws to ensure free, fair and credible elections, the status of Ile Perseverance -- a reclaimed island where the largest social housing project is being built -- was another main point of concern.

In an interview aired on national television on Thursday, the Attorney General explained that an amendment of the Elections Act will soon be brought to the National Assembly so that Ile Perseverance residents can vote in the district where they were previously registered come the next legislative election.

Ronny Govinden added that later on, after the dissolution of the assembly and the coming into force of the presidential order making Ile Perseverance an electoral district, another election will be organised so that the Ile Perseverance residents can choose their parliamentary representative.

LDS is not in favour of the decision.

"We are saying it is unfair that residents of Ile Perseverance will vote in their former district and to vote again at a later date,” said Ramkalawan.

However in a statement issued Friday, the Electoral Commission said representatives of all political parties had met and had made recommendations to the president to make the necessary amendments to the Elections Act to enable residents to vote in the electoral area of Ile Perseverance in the upcoming National Assembly elections.

Parliamentary polls in the 115-island archipelago in the western Indian Ocean are held every five years and are due later this year. The last elections took place in September 2011.

The SNP leader also told SNA that he has written to the Electoral Commission to request a meeting aimed at discussing some deficiencies and irregularities observed during the last December presidential elections. These were highlighted in a Constitutional Court ruling at the end of last month.

The SNP leader had petitioned the Constitutional Court in January to nullify the results of the election, but the petitions were dismissed by the court.

Campaigning is likely to heat up in the island nation as the Electoral Commission said on Friday that the process leading to the next National Assembly election commences on Saturday.

The Electoral Commission said the dates for the National Assembly elections and nomination of candidates will be announced in the near future.