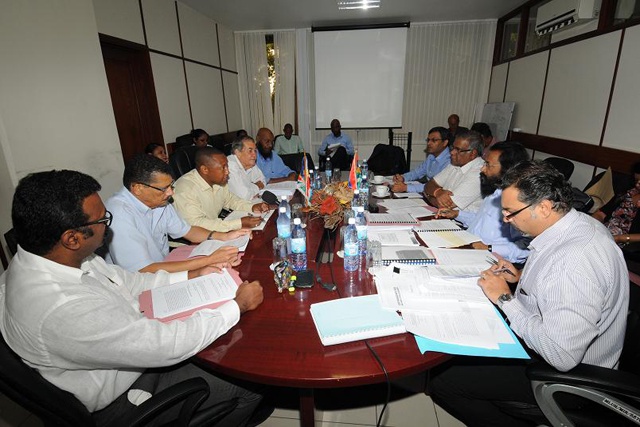 (Seychelles News Agency) - Seychelles and its neighbouring Indian Ocean island of Mauritius are intensely discussing ways to harmonize legislation for the management of resources found within the area of the extended continental shelf in the Mascarene Plateau region, jointly shared by the two island nations.

The two day of talks which opened today in the Seychelles capital of Victoria are aimed at creating common standards and consistency of regulations on various issues including fiscal taxation, environmental code of practice, petroleum tapping and safety safeguards for the joint management of the 396,000 sq km Mascarene Plateau region.

The two day gathering consists of the 4th meeting of the Seychelles-Mauritius Joint Commission and its 8th technical committee meeting.

Speaking to the local press this morning, Suresh Seeballuck, the Secretary to the Cabinet who is part of the Mauritian delegation, said some of the items on the agenda have been canvassed for quite some time and referred particularly to the Draft Petroleum Agreement and the Environmental Code of Practice.

He suggested that the documents be approved during the present meeting.

"At any rate, if in future, the situation warrants that these agreements be revisited, we shall certainly do so,” he added.

Seeballuck added that the technical committee has already made a proposal to showcase opportunities in the jointly managed zone at a business forum, being planned for October/November 2014.

For his part the chairman of Seychelles’ Maritime Boundary Delimitation Committee also the Special Adviser to the Minister for Land Use and Housing Raymond Chang Tave, said considering that both countries have already agreed to share the resources in the zone on a 50/50 basis, it is important that they have the same codes and modes of operation, to avoid future misunderstanding.

He noted that this is the first time two countries agree to jointly manage economic resources under the United Nations law of the sea convention that came into being in 1982.

"We therefore constitute a model for other states,” said Chang Tave.

In March 2009, Seychelles and Mauritius made a proposition to the United Nations for the shared management of the Mascareignes plateau region, an extended continental shelf of around 396,000 sq km.

The UN adopted the submission in March 2011 and in March 2012 that Seychelles President James Michel and the Mauritian Prime Minister Navin Ramgoolam signed treaties for the management of the area during the state visit of Michel to Mauritius.

At the convening of today’s meeting, the Principal Secretary in the Seychelles Ministry of Land Use and Housing, Joseph Francois hailed the spirit of the agreement, which he said resulted from the strong political commitment of the two leaders.

"They agreed to share resources that are common between us, instead of fighting over them. It is a spirit which should be renown in the region and the world," he said.

Francois also expressed satisfaction the support the Joint Commission is getting from the Commonwealth.

"Today, the Joint Commission has reached an advanced stage in establishing mechanisms to manage the resources within the area of the extended continental shelf in the Mascarene Plateau region." he said.

A similar exercise that has begun with Tanzania is still in the preliminary stage. "We have still to determine what options the two countries will mutually agree on," Chang Tave told SNA.