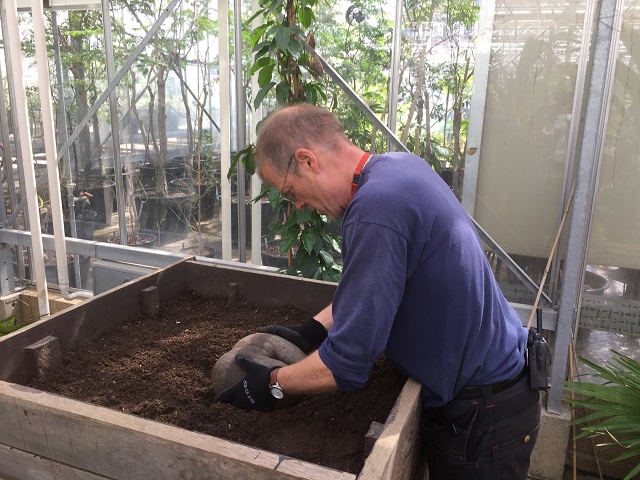 (Seychelles News Agency) - The Royal Botanic Gardens, Kew in the United Kingdom is attempting to grow another of the Seychelles’ legendary nut, the coco-de-mer.

Head of media relations of the gardens, Ciara O’Sullivan, confirmed by email to SNA that the gardens received the seed earlier this year from the Singapore Botanical Gardens.

Sullivan said after first being checked by Kew’s quarantine section, the seed was taken to the garden’s tropical nurseries.

“The new seed has been placed in a temperature controlled nursery glasshouse where we have high humidity and an average temperature of around 25 to 28 degrees Celsius,” says Nick Johnson, the display conservatories’ manager.

Endemic to the Seychelles, an archipelago of 115 islands in the western Indian Ocean, the coco-de-mer is the world’s biggest nut and grown naturally only in the island nation. It is red listed as an endangered species by the International Union for the Conservation of Nature (IUCN).

For the next few months, Johnson says the Kew Gardens will be keeping a close eye on their newly acquired possession.

“We will visually check for signs of its special root called hyperphyll which will indicate that the germination process has begun. Then we will look for a shoot coming from that growth called a cataphyll which will in turn bear the first leaf.”

Johnson adds that it can take as long as 18 months for a germination to take place.

The coco-de-mer male and female is borne on separate trees, and both are needed to guarantee the reproduction of this species.

“If it grows, it will be planted in the centre section of the Palm House so that it glories as one of the most spectacular of all species of palms,” says Johnson.

The first time that Kew Gardens in London, which is recognised by UNESCO as a World Heritage Site since 2003, acquired a coco-de-mer seed was in 1994.

It came from the Royal Botanical Gardens, Peradeniya, in Sri Lanka, and was planted in the Kew Garden’s Palm House, one of Europe’s oldest glasshouses. It successfully germinated after six months.

The tree stands at four metres tall today. Local expert Seychellois Frauke Fleischer-Dogley is not surprised by the slow growth of the palm.

Having studied the species as part of her doctorate, Fleischer-Dogley says ‘the coco-de-mer in Kew has probably adapted to the condition it is growing in."

“In places like the Vallée de Mai [a UNESCO World Heritage Site of Seychelles located on Praslin] a juvenile plant will grow to a height of approximately 12 metres reaching for the light in the canopy,” says Fleischer-Dogley.

Similarly, she said the nuts found on Curieuse Island will be approximately three metres tall due to the completely different environment conditions there.

Apart from the coco-de-mer, another endemic plant of Seychelles at the Kew Garden is the Jellyfish tree.