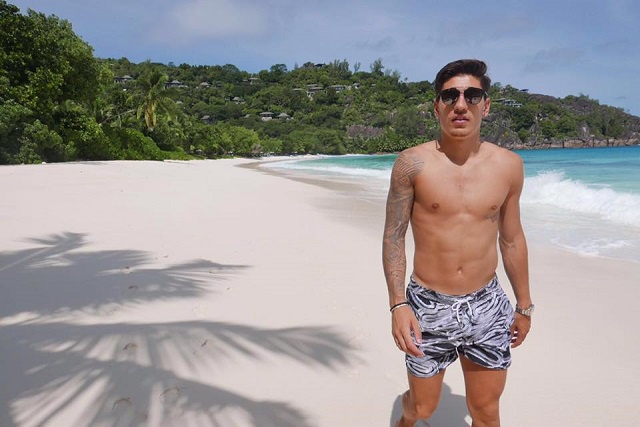 (Seychelles News Agency) - Arsenal footballer Hector Bellerin tweeted a picture of himself on a tropical beach last weekend captioned only with the word ‘Paradise,’ fueling a social media frenzy with fans trying to guess the location.

Among the expected outpouring of replies, a few eagle-eyed football fans from Seychelles, a 115-island archipelago in the western Indian Ocean, started getting very excited indeed, as they may have reason to believe that the beach he was standing on might be one of their very own.

It is thought that the beach in question might be none other than Petite Anse -- a small but breathtakingly beautiful beach on the southwestern coastline of the main island of Mahé. Bellerin’s picture shows the same villa-type buildings nestled among the tropical green hillside as can be found in many pictures of the famous beach often frequented by some of the world’s richest and most famous visitors.

Among the player’s 522,000 Twitter followers and 1.1 million Instagram followers, it was apparent that the beach rang a bell for a handful of observant fans, both of Seychellois origin as well as visitors to the islands.

Twitter fan @leonel_joesph said “Yes Hector in Seychelles...paradise”, while @veni_vidi_54 commented that it looks like “Seychelles. Where are you?”

On Instagram, @rashid4664 seemed to recognise the beach because as he told another Instagrammer, “we were just there…,” adding to another follower who said “I thought it was Seychelles but I could be wrong”.

Spanish-born Hector Bellerin Moruno, could be said to be living the dream. In 2013, at the age of just 18, he signed his first professional football contract with English Premier League team Arsenal. A defender renowned for his speed, Bellerin broke Theo Walcott's 40 metre Arsenal sprint record by 1/100th of a second in the beginning of the 2014-2015 season.

Bellerin and his girlfriend’s holiday snaps have also got a sports related online publication – The Sport Review wondering, as it wrote that Bellerin “appears to be completely relaxed as he enjoys some well-earned downtime in warmer climes before reporting back to Arsenal for pre-season training.”

A quick look at Bellerin’s girlfriend, Berta Requeno’s Instagram account offers up a few more images of what looks to be the same beach, but given the romantic and relaxed setting of the pictures, it seems the couple are not in any rush to confirm or deny any speculation about their current location.

The Seychelles, with its year-round warm weather, has for many years been popular with celebrities after a little sun, romance and privacy. The island destination made headlines after royal couple Prince William and Duchess Kate of Cambridge spent 10 days on North Island after their wedding in April 2011.

Head of Seychelles’ anti-corruption body: We will work without fear or favour