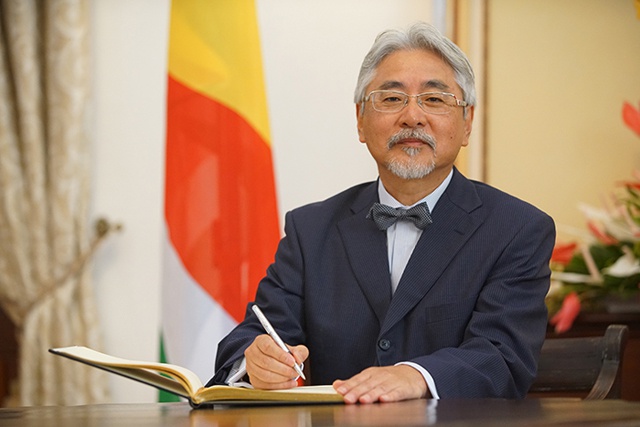 (Seychelles News Agency) - Fisheries is the most important area of cooperation between Seychelles and Japan, the new Japanase ambassador accredited to the island nation said on Tuesday.

“We have already provided a well-established port and cold storage for the sector, and we are now working on the expansion of the Providence fishing port to make it larger,” Uesawa told journalists.

Environment protection -- particularly that of the coastal areas -- is another area he feels there is potential for more cooperation.

The Japanese government donated a grant to a local non-profit organization on Praslin – Seychelles’ second largest island -- earlier this year. The money is being used to fund rehabilitation efforts of areas destroyed by forest fires and soil erosion.

Maritime security, air services, hydrocarbon explorations and existing ties between Seychelles and Japan were also highlighted during talks between the diplomat and President Michel.

Uesawa said that the two countries are strategic partners and described the 115-island archipelago’s location in the western Indian Ocean as strategic, considering it acts as a hub to Africa, the Middle East and Indian Ocean regions.

“Our relation is not only bilateral but the Seychelles-Japan alliance is important to deal with the international context as well,” he added.

Uesawa also took the opportunity to extend an invitation to President Michel to attend next month’s largest international conference on African development which Japan will be hosting in Nairobi, Kenya.

The newly-accredited ambassador, who visited Seychelles for the first time 30 years ago, replaces Ambassador Tatsushi Terada who has occupied the post for the past two years.

He is based in Nairobi.

Seychelles and Madagascar to set up partnership in fishing and agriculture